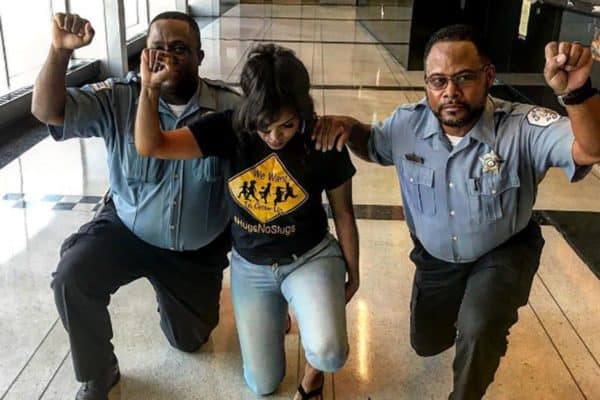 The Chicago Police Department is investigating a photo of two uniformed officers photographed ‘taking a knee’ following sideline demonstrations against police brutality by players in the NFL.

Two African-American officers in a South Side precinct in Chicago, Illinois, can be seen kneeling with activist Aleta Clark in a picture she posted on Instagram on Sunday.

Clark is best known for selling shirts with the slogan ‘Hugs No Slugs.’

On Monday, CPD spokesperson Anthony Guglielmi said that they department was aware of the photo.

‘We are aware of the photo, and we will address it in the same way we have handled previous incidents in which officers have made political statements while in uniform, with a reprimand and a reminder of department policies,’ Guglielimi said in a statement to the Chicago Sun-Times.

The post has gained almost 1,900 hearts on the social media platform and join a series of post showing the Englewood native taking a knee in support of quarterback Colin Kaepernick, who sparked the movement last year.

Clark later posted a video on Instagram where she details asking other officers if they would also take a knee.

She asserts that when approached, ‘European’ officers refused to join her in kneeling.

Uniformed officers are barred from participating in ‘partisan political campaign,’ according to the department’s code of conduct.

Officers had to be reminded of such in January when a Twitter user posted a picture of a CPD vehicle parked near a protest on Inauguration Day with a red ‘Make America Great Again’ hat on the dashboard.

In both cases, Gugliemi said that officers were reprimanded and counseled on department policy.

On ‘Second City Cop’, a blog, commenters were annoyed with the photo, citing the MAGA hat incident.

The controversial kneeling pose first broke last fall, when Kaepernick chose to kneel during the national anthem before the game to protest police brutality.

Kaepernick went unsigned by the NFL team this season, only prompting more protest from fans and players alike.

Since then, several others players had joined the movement throughout the last year, prompting outrageous tweets and comments from President Donald Trump over the weekend.

One poster on the blog post said that CPD should ‘Fire the Sons of B*****s,’ in reference to the Trump speech where he suggested NFL owners should fire any player who participates in an anthem protest and ‘get that son of a b***h off the field.’

Following his comments, many teams and their owners knelt and/or stood with their arms intertwined in support of Kaepernick.