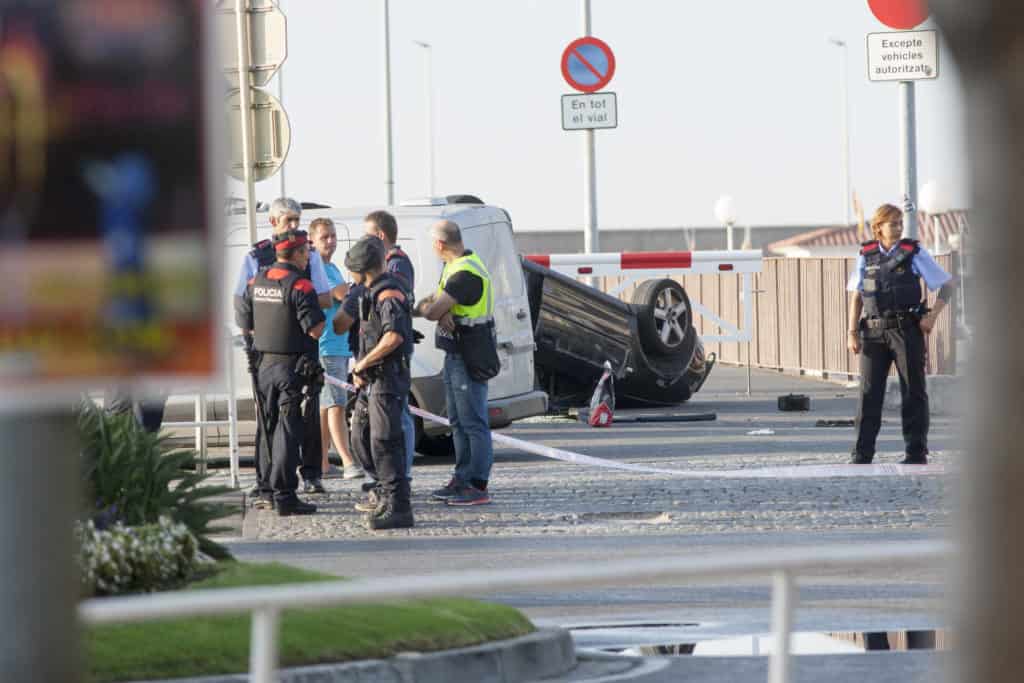 In the early hours of this morning, as police in Barcelona continued to piece together the terrible events on Las Ramblas yesterday afternoon, another vehicle attack occurred in the seaside town of Cambrils, a popular tourist destination about 75 miles south of the Catalonian capital. Five men, some wearing fake explosive belts, drove into crowds and injured seven people, including a police officer, before their car flipped over. Whilst trying to escape the scene, four of the suspects were shot dead on site and one died later after being arrested.

Spanish police say that the Cambrils attack is linked to yesterday’s incident in the Catalonian capital. Vehicle attacks, it seems, constitute a new threat to European cities. Now they have arrived in Spain, too.

Details of the attack in Barcelona continue to emerge, but it has now been confirmed that 13 were killed by the white Fiat van that mowed its way down the tourist-packed Las Ramblas, apparently weaving from side to side in order to maximise the number of people hit. More than a hundred were injured, fifteen of them seriously. Three suspects remain in custody but the driver, who fled the van on foot, has yet to be found. Isis has claimed responsibility for the attack, which Spanish prime minister Mariano Rajoy has described as “jihadist”. Rajoy has announced three days of national mourning for its victims.

Catalonia – which includes the province of Tarragon, in which Cambrils is located – received some 17.4 million visitors last year, making it the most visited part of Spain. That this sought-after area has seen two vehicle attacks within the space of 12 hours has imbued the task now facing Rajoy with even greater urgency. That task is the formidably difficult one of how to deal with the new threat posed to residents of and visitors to Europe’s most popular cities.

The Spanish national newspapers have been swift to react to the attacks in Barcelona and Cambrils. El Mundo declared that the events on Las Ramblas yesterday showed that jihadism “remains without doubt the greatest threat to world peace and security”. The paper goes on to state that its adherents have waged war on “all those nations they consider infidels – that’s to say, those that don’t accept that their radical religious interpretation is the only one possible”.

El Pais said in its editorial that in choosing to attack Barcelona, the terrorists had chosen a city “that represents, like no other, a spirit of open space, democracy and plurality”. The paper also said that the attackers had once more targeted a country “which has been fighting, since the painful date of March 11th, 2004 [when terrorist attacks in Madrid killed 192 people], an energetic and unceasing war against terrorism”.

Other countries recently stricken by this form of murder face the same problem that Spain is now confronting. In Nice last July, Tunisian Mohamed Lahouaiej-Bouhlel drove a van into Bastille Day crowds and killed 86 people. In Berlin last December, 12 people were killed in a vehicle attack at a Christmas market. This June, London saw vehicle attacks in London Bridge and Finsbury Park. UK authorities have placed protective barriers in some locations around London and are considering carrying out security checks on those renting vans. But the facts that this method of assault requires no training and just one easily accessible weapon makes it harder to detect and prevent than more specialised ways of attacking civilians.

As details of the attacks in Barcelona and Cambrils continue to emerge, Rajoy has pledged to enforce security in the Catalonian capital and to bring those responsible to justice, saying that terrorism is a “global threat and the response has to be global”. The world’s governments have expressed their condolence and support for Spain, the latest country to be struck by a new kind of terrorism.