[Editor’s Note: We’ll update this post as we come across new information. If there’s something you think we should include, please leave it in a comment below.] The group has previously called for “action” in response to police shootings of blacks: Micah Johnson with “Professor Griff” of the hip hop group Public Enemy. The group was known for its politically-charged lyrics. Its album Fear of a Black Planet critiqued “institutional racism” and “white supremacy” and called for black power. 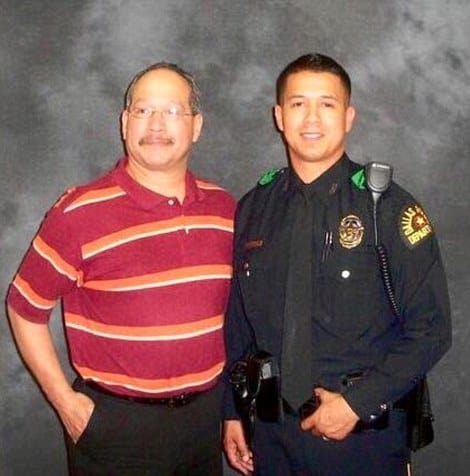 Last night’s horrific execution-style shootings of 12 Dallas law enforcement officers–five of whom were killed and seven wounded- is an attack on our country. It is a coordinated, premeditated assault on the men and women who keep us safe.

The senseless, tragic deaths of two people in Louisiana and Minnesota reminds us how much more needs to be done.

This morning I offer my thoughts and prayers for all of the victims’ families, and we pray for our brave police officers and first responders who risk their lives to protect us every single day.

Our nation has become too divided. Too many Americans feel like they’ve lost hope. Crime is harming too many citizens. Racial tensions have gotten worse, not better. This isn’t the American Dream we all want for our children.

This is a time, perhaps more than ever, for strong leadership, love and compassion. We will pull through these tragedies.

Micah Xavier Johnson is a hero in my book!

Micah Xavier Johnson. I don’t agree with the whole situation. But we appreciate you and your courage. Fly high

Put them pigs in a blanket ??? #Dallas