The Joe Biden/Kamala Harris Administration isn’t just another presidency. Well-meaning conservatives will have to realize that this regime does not represent them. Our nation is inseparable from race and culture, and the government on the Potomac is not our government. We can’t escape “American” politics, but we shouldn’t waste time thinking about Washington, DC. Instead, we must build something new.

The new administration has a foundational myth: that Donald Trump was uniquely dangerous to “Our Democracy,” an aspiring autocrat who tried to steal the election and then incited an “insurrection.” Journalists claim it was all based on a lie.

Countless articles use the same words, an obvious references to the “Big Lie” technique supposedly used by the Nazis. Joe Biden said this explicitly. Many people have claimed that Adolf Hitler and/or Joseph Goebbels said that the bigger the lie and the more you repeat it, the more people will believe it. Both men were talking about what they thought their enemies were doing, not what they would do. To quote the “Big Lie” this way is itself a big lie, and it’s effective. What Republican will explain that the Nazis are being misquoted?

I have no doubt that Mr. Trump sincerely believes the election was stolen, so he was not intentionally lying at all, but the “big lie” and the “insurrection” are now supposed to be reasons to impeach Mr. Trump for the second time. 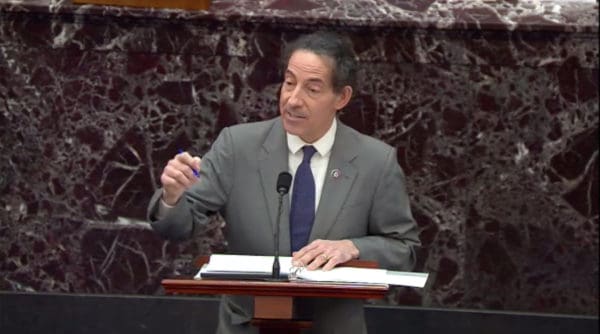 President Trump did many good things. He may not get enough credit; he was constantly thwarted and reviled. However, his administration was hardly revolutionary. Aside from tweets and confrontation with the press, President Trump governed like a standard Republican. He never used his power to hurt the media or his political opponents. It was his own supporters who suffered most. His solution to the Big Tech censorship that silenced so much of his base was “just being good.” Now, he doesn’t have a Twitter or Facebook account. Passivity like that hardly sounds “authoritarian” or “fascist.”

At a deeper level, the election was rigged against him. Time has published a triumphant article about how a “well-funded cabal” “fortified democracy” by changing election laws and controlling speech. If the article had been about a Russian or Chinese election, we’d laugh at the idea that a cabal can “fortify democracy.” Whatever the vote totals were, it wasn’t a fair election.

Democrats charge that protesters thought they were “following orders” when they broke into the Capitol. Some of those arrested will make that claim to defend themselves. But what orders? President Trump told demonstrators to protest “peacefully and patriotically.” If this still counts as “inciting” violence, what are we to do about explicit calls by Democrats for radical protests? The Capitol takeover was not an “insurrection.” Was the Q-Anon Shaman supposed to become the new Speaker of the House? The main victims of the riot were Trump supporters. An officer shot Ashli Babbitt, an unarmed woman. Kevin Greeson, Benjamin Phillips, and Rosanne Boyland died from medical emergencies. Capitol Police Officer Brian Sicknick died of an unknown cause; he may have had a fatal reaction to bear spray. Thus, there were four dead Trump supporters and one policeman. Officer Sicknick was certainly a victim, but the latest press reports say prosecutors are having a hard time charging anyone with homicide. Two other officers later killed themselves. We don’t really know why.

Ironically, both leftists and Q-Anon protesters believed there was a master plan. There was no plan. President Trump was talking big, but he didn’t intend a putsch. Has he ever followed up on his tough talk? His supporters were a leaderless rabble. Most came for a protest and nothing more. Indeed, video from the day shows some Trump supporters calmly walking through the Capitol, careful to stay within the velvet ropes for tourists. Representatives in Congress are a greater danger to those statues than any “insurrectionists.”

Donald Trump had no plan. He was an American version of General Boulanger, someone who had a mass following but lacked the will or vision to accomplish anything. The Capitol Farce is the Reichstag Fire for progressives, an excuse to consolidate power and crush opposition. This includes efforts to expel Ted Cruz and Josh Hawley for supposedly inciting insurrection. The new Administration has also begun a repressive campaign against white advocates.

Among Joe Biden’s first actions were to abolish the 1776 Commission and reimpose critical race theory on the federal government. Progressives are also teaching critical race theory in college and even in elementary school. This causes racial conflict by provoking and rewarding non-white resentment. The state is undermining the nation, whether by intent or ignorance. The state also can’t defend its own symbols. Progressives wail about the “desecration” of the “temple of democracy,” but the Biden White House is lukewarm on defending the national anthem. Dallas Mavericks owner Mark Cuban said his team was not going to play the Star Spangled Banner before home games because members of the “community” felt the anthem “did not fully represent them.” He later backpedaled after the NBA said the anthem must be played. The White House waffled.

[President Biden would] also say that, of course, that part of the pride in our country means recognizing moments where we as a country haven’t lived up to our highest ideals, which is often, and at times, when people are speaking to when they take action at sporting events.

And it means respecting the rights of people, granted to them the Constitution to peacefully protest.

I’m not sure about the President’s support for “peaceful protest;” the Department of Justice arrested “Ricky Vaughn” for posting memes and the FBI raided activists who held pro-Trump rallies. The meme “Ricky Vaughn” posted that led to his arrest.

It is not yet a crime to belong to a “domestic terrorist group” or to hold certain opinions, but that could change. The federal government would have a hard time punishing white advocates and civic nationalists while ignoring antifa and BLM. Canada doesn’t have this problem. It declared the Proud Boys a “terrorist group.” Canada criminalizes membership and imposes penalties on anyone who does business with the group. The First Amendment theoretically prevents the American government from doing this, but I have faith in the creativity of lawyers and judges to work around that little problem, especially after President Biden replaces one or more Supreme Court justices.

One of President Biden’s other early decisions was to allow American embassies to fly the gay pride flag. Burning the American flag is free speech, but burning the gay flag can be a hate crime. It remains to be seen whether embassies will also display Black Lives Matter banners. The last Super Bowl began with the “Black National Anthem,” so white Americans should get used to blacks’ quasi-sovereign status.

While new symbols go up, others come down. The city of Charlottesville won’t just take down Robert E. Lee, but reportedly wants to ditch Lewis and Clark. San Jose will dump a statue of Thomas Fallon because he raised the American flag over the city. The Father of His Country isn’t safe either, but the country he fathered doesn’t exist anymore. Get ready for Harriet Tubman on the $20 bill instead of Andrew Jackson.

During the Civil War, both sides claimed to be fighting for the Founders’ vision. This new America is explicitly built on repudiation. Thomas Fallon raising the flag is no longer an American triumph, but a shameful affront to Mexicans and American Indians. The Founders enshrined white supremacy. The arrival of Christopher Columbus and whites to the New World isn’t a day of celebration, but a day of mourning. Thanksgiving is no longer about gratitude to God but apologies to American Indians. If there’s anything to be saved from the old America, it’s one silly phrase from the Declaration of Independence. Many conservatives believe there is a limit to the destruction. There isn’t. America imports people like Ilhan Omar, gives them preferential treatment, and rewards them for hating the country. If you subsidize something, you get more of it. Conservatives understand this about economic policy.

Aside from a few tokens hired by the American conservative movement, non-whites have no reason to be patriotic or identify with the historic American nation. Why identify with people who aren’t of your race, especially when you are rewarded by every powerful institution if you claim you’re a victim?

Also, the media should never surprise us. We don’t have a state-run media; we have a media-run state. Media campaigns can determine who and what the state prosecutes. Media also determine who can do business or speak online. Men seek power. Why should we be surprised that journalists use power to shut down others? We should remember what John C. Calhoun taught us: “Power can only be resisted by power.”

For the last half century, the conservative movement has often taught its followers to avoid power. The result was that the Left captured the universities, the media, and the bureaucracy. Progressives even control Big Business. Now, every major institution in America opposes white interests. Therefore, what interest do we have in upholding such a society? It’s absurd to be conservative when there’s little worth conserving.

In an editorial two weeks ago, National Review said that the Capitol should not be a militarized zone but rather symbol of “a free people’s self-representation.” I disagree. The Capitol should remain as it is: the “Green Zone” of an occupying regime as foreign and hostile as anything in Iraq or Afghanistan. It should look the part. MSNBC’s Nicole Wallace implied that the government should consider military strikes against those who “incite terrorism,” meaning the Capitol protests. We aren’t a free people and should stop pretending we are. Conservatives need to grow up or admit they’re just collaborators and phony opposition. Where does that leave us? Whites are stateless, leaderless, and without representation in “our” government. There is not one figure who defends whites as whites. Every other group has leaders who explicitly defend interests. Like white South Africans in the 1980s and 1990s, we are trapped in an impossible dilemma. Are we part of a larger “American” country that is now at war with its own white past, or are we something different?

I’d say we are something different – but what? Southern nationalism is a dead end as states like Georgia turn brown. Claiming we are the “true” America makes it hard to forge a separate identity. What’s more, our struggle is worldwide. White Americans face the same opponents and the same challenges as white Canadians, French, Germans, British, Irish, and other members of the European brotherhood. I have far more in common with them than I do with someone like Rashida Tlaib. I don’t care what’s on our passports.

I don’t have the final answer or the ultimate path forward. Something will emerge depending on circumstances and the new challenges that will emerge. However, I do know we need at least to ask the right question before we get the right answer. “How do we save America?” is no longer the right question. “America” itself has become an almost meaningless word. “How do we save our people?” is where we need to start. A Western civilization-state is where we need to end.

What we do in between will be the story of the next few years, perhaps the next few decades. They may prove to be the most important in the entire history of our race. There can be no more illusions. The hour of decision is here. Western Civilization – white Civilization – yes or no? We must make our choice.

Mr. Hood is a staff writer for American Renaissance. He has been active in conservative groups in the US. You can follow him on Gab.
< Who Are the Enemies of Western Civilization?
San Jose Leaders Agree Thomas Fallon Statue Must Be Removed >
Blog
Commentary
Videos
Podcasts
Follow us