A Nation of Pioneers, Not Immigrants Some schools ban Indian mascots. Others ban pioneers. Both are “offensive.” This seems contradictory, but there’s a link. Both remind whites that our country was not “built by immigrants.” Pioneers and conquerors built it, and to do so they had to defeat warrior tribes, not meek victims. This isn’t the popular version of American history today. When an eminent historian writes the “Heroic Story of the Settlers,” it’s eye-opening. David McCullough clearly admires his subjects — the people who settled Marietta, Ohio — but he does not cover up their atrocities. For example, in 1782, American militia falsely blamed Indians for murdering a pioneer family, and massacred 96 innocents. In response, Indians tortured, scalped, mutilated, and killed Colonel William Crawford, a friend of George Washington.

David McCullough reminds us of our true national character, and The Pioneers contains an important lesson: Western Civilization isn’t about location, but blood. We bring our civilization with us.

The settlement of the West defines our history. The British attempt to limit western expansion was an important cause of the Revolutionary War. Arguably, the main split was between the British elite who wanted colonies dependent on the mother country, and the colonial elite who wanted an independent, expanding future.

George Washington spoke of “our rising empire.” Despite its questionable constitutionality, Thomas Jefferson bought Louisiana and called for an “empire of liberty.” During peace negotiations with the British, John Adams said he would “shed the last drop of blood” rather than “relinquish our claim in the western territory.” His son John Quincy Adams proclaimed in 1802, “Westward the course of empire takes its way.”

Ohio is not a “western” state today, but it was once the frontier. (“Tell me about Ohio,” says the highly fictionalized Banastre Tarleton in The Patriot after he’s promised western land). The Confederation Congress wisely passed the Northwest Ordinance to govern the territory. It guaranteed religious freedom and supported education. It set up a path to statehood. It also barred slavery at a time when every state allowed it. Finally, it allowed settlers to claim land and wealth for themselves. It was, in Mr. McCullough’s words, “designed to guarantee what would one day be known as the American way of life.”

New Englanders settled Marietta; settlers christened the boat that took them to their new home the Mayflower. The key figure was General Rufus Putnam, a Revolutionary War hero who wanted to create a “new New England.” Another important leader was minister Manasseh Cutler, who preached a sermon about the “American empire,” a “new Empire [that] has sprung into existence.” He believed religious freedom, education, and development of the arts and sciences would not undermine Christianity. History may have proved him wrong, but without faith, Cutler and his companions could not have accomplished what they did. There were two obvious obstacles: the Indians and nature. When the settlers arrived in 1788, 70 natives met them, including the Delaware chief Captain Pipe. He “greeted the arrivals as brothers” and swore friendship “as long as the sun and moon endured.” The settlers knew Captain Pipe had helped torture Colonel Crawford; they quickly built a stockade.

Mr. McCullough doesn’t hide the settlers’ feelings about Indians. In one passage, Reverend Cutler complains about drunken “squaws” loitering around his house.

The Pioneers notes that there were many different Indian tribes. Some mixed freely with the settlers; others wanted war. Putnam thought the Delawares and Wyandots seemed friendly, but that others were “a set of thievish murdering rascals.” According to Mr. McCullough, the “native people did not believe land was something to be owned.” Though there was a treaty, neither side expected it to last. Some natives began slaughtering all the game in the area, hoping the whites would starve.

They almost did. In the fall of 1789, an early frost, measles, the Indians’ scorched earth strategy, and sporadic ambushes almost crushed the whites. “What saved the settlement was generosity” within the group, writes Mr. McCullough. We see the same spirit when disaster strikes a white community today (in contrast to non-white areas, where we often see something different).

Indian attacks became more common. Mr. McCullough notes that Indians hated “surveyors,” who were “the ones preparing the way for more white invaders.” One surveying party was almost annihilated. A group of whites, including a woman and two children, invited Indians to share a meal and were treacherously massacred. The Marietta settlers were prepared for attacks at any moment. Their scouts were ambushed and scalped.

These attacks are not unlike the mass shootings in El Paso and Christchurch. Massive demographic change leads to violence, usually against innocents.

President Washington sent a large but undisciplined army to secure the area, but it was crushed at “St. Clair’s Defeat.” Indians killed or wounded an astonishing 1,094 Americans and lost only 21 of their own. Americans avenged this defeat at the Battle of Fallen Timbers, a victory that bought Marietta the peace it needed to develop. 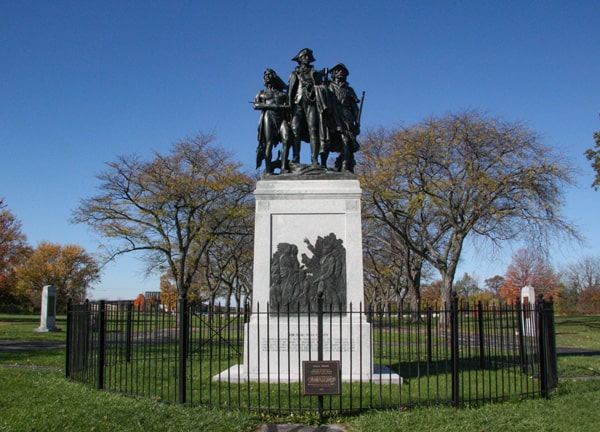 In 1802, Manasseh Cutler’s son Ephraim was a delegate to the constitutional convention of Ohio. Mr. McCullough notes that a black servant was allowed to vote in the election, “the first vote cast by a free black African in the Northwest territory.” Ephraim Cutler cast the deciding vote to reaffirm a ban on slavery in Ohio. Whether intended or not, this guaranteed the territory would be almost entirely white.

The Pioneers is a profile of white people at their best. When settlers found a great mound built by a vanished people, they protected it from development and studied it. They exchanged New England farmers’ garb for buckskin. When they were cooped up in the stockade waiting for Indian attacks, they organized sports and games. They stamped this new land with a Western identity. They named the town for Marie Antoinette and called the stockade Campus Martius (Field of Mars). They named the main street for George Washington.

The Pioneers has fascinating information about the Aaron Burr conspiracy, the War of 1812, and even Johnny Appleseed. Yet what will most impress white advocates is the settlers’ strong sense of duty. Loafing, writes Mr. McCullough, was unknown; everyone worked, even the children. The doctor Samuel Hildreth, who had a good New England education, refused to take payment during an influenza epidemic. He published articles, advanced the field of medicine, and provided a huge scientific library and collection of specimens to Marietta College. His obituary said he did it “by saving the ‘odds and ends’ of time.” Even in this wilderness, Hildreth and others were already planning universities and government institutions.

It’s humbling to see what people with modest means could accomplish. The highest praise offered was for people who were “useful.” In many ways, The Pioneers is a moral text, a practical, American version of Marcus Aurelius’ Meditations. Duty, patriotism, stoicism, and being “useful” — this is the code of the American settler.

The book has flaws. It is so focused on Marietta that we hear very little about other major events, such as Tecumseh’s uprising. We get tantalizing glimpses about the growth of Cleveland or Cincinnati, but the focus is so local that sometimes The Pioneers reads as if it were published by the Marietta Chamber of Commerce. Mr. McCullough quotes foreign visitors who bemoan the Americans’ treatment of the Indians, without reminding the reader that promises of eternal Indian friendship turned into violent attacks within months. Southerners may not like the book’s pro-Yankee attacks on the Old South. The latter half of the book drags, mostly because the hard work of settlement has been done.

Still, the first half is engrossing — as thrilling and suspenseful as a good spy novel. At any moment, this tiny band of families could be wiped out by plague or Indians, yet they do their duty. They form a community that seems more real than anything in America today, even with all the social networks that are supposed to “connect” us. What is most striking is a complete lack of self-doubt. Leaders simply do what needs to be done.

There’s also a warning for white advocates. Some Indians urged war against the settlers; some wanted peace. Yet ultimately, demography is destiny, and the Indians were overwhelmed. One tribe bemoans leaving behind the “burial places of their kindred.” “Only the Indian names were to remain,” Mr. McCullough writes.

If we do nothing, whites won’t even have that. Names are often the focus of this tale. It is a story of allusions to Rome and Washington, the Queen of France, and the Pilgrim Fathers taking root in a savage country. Yet every day we hear of another school or street renamed, a statue destroyed, a symbol desecrated. Settlers worked, fought, and sacrificed to create a “rising empire,” but their descendants have been unable to keep it.

We owe it to our ancestors to reclaim it, no matter the odds. White advocates should read The Pioneers to remind ourselves of the terrible odds our ancestors faced. We are the heirs of heroes, and we must be worthy of their legacy.

Mr. Hood is a staff writer for American Renaissance. He has been active in conservative groups in the US. You can follow him on: Gab.
< Diversity Means Fewer White People
Army Hysteria over “White Scare” >
Blog
Commentary
Videos
Podcasts
Follow us