More than any other nation on Earth, the United States is responsible for promoting the race-denying ideologies of egalitarianism and globalism. America’s law enforcement officers — the “face” of government to many people — quickly have to forget what their training and society have told them as they learn the truth about group differences. If you are an officer, you will quickly be “red-pilled” on the reality of race, whether you like it or not. I have served for several years and have been thoroughly reeducated by the “privilege” of meeting all kinds of people I would never have associated with in any other profession.

As anyone with the slightest understanding of crime statistics knows, many of the calls we take involve black suspects. High-priority calls, such as robberies or assaults with a deadly weapon, frequently have such similar descriptions of the suspects that one officer joked that we have been looking for the same man for the past 50 years: a young black male in a white t-shirt and blue jeans. And it’s the same suspect for lesser crimes.

A common problem among blacks is an inability to understand the laws they are breaking. One case sticks in my mind — when I probably came closer than at any other time in my career to shooting someone. Another officer and I were dispatched because a black man was trying to get into the home of his ex-girlfriend’s family to see his infant daughter. He had a history of violence, so they wouldn’t let him in. He grabbed a knife and threatened to cut everyone’s tires if he couldn’t see his daughter, and when that didn’t work, he shouted that he would get a gun from his car and shoot everyone.

Dispatch kept us updated on these threats, and as I followed the other officer running up the hill to where this was happening, I saw him pull out his weapon and give orders to drop the knife. I rounded the corner of the house and did the same, to which the man shouted, “Y’all just want to shoot a nigga.” I pointed my Taser directly at him. So did the other officer. After seeing the tasers pointed at his chest, he realized that we might not shoot him if he just stood there acting tough, but that there was a very good chance he would be tased. He dropped the knife and surrendered.

The family got a restraining order against the man, who thought it applied only to the family personally. He didn’t realize it applied to their property as well, and he went to the house at a time when he thought the family would not be there. At court, he tried to explain, and talked over the judge who then snapped, “You know what your problem is? You don’t listen.” And so, he was back in jail, because he couldn’t understand a simple restraining order.

Many blacks don’t seem to understand the consequences of what they do. Teenagers, especially blacks, find parties and show up by the hundreds even if they have no connection to the people hosting the party. This happened not too long ago in McKinney, Texas, and the resulting police action lead to one officer becoming the target of a witch-hunt and being forced to resign. In my area, we often get calls because so many cars are parked in a neighborhood that no one can get in or out. 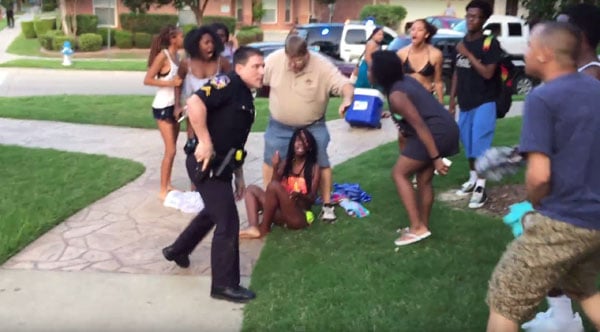 In situations like this it’s common for shots to be fired. One black household was besieged by a dozen teenagers who had heard false rumors about a party. When they were turned away, angry words were exchanged and shots fired into the air. This happened at night, involved people who hardly knew each other, in a place with no security cameras or good witnesses. Therefore, like so many others, the incident was documented and shells were collected, but nothing else happened. Neighbors either move or get used to it.

An officer I know who works in a nearby city showed me a video she took on New Year’s Eve. As midnight struck, all you could hear was gunfire. Even though it sounded like a gun battle in the Middle East, no one called in to report shots fired. This was expected behavior.

Even when there is no crime, blacks can get out of hand. We get a lot of runaway calls. Most of the time the parents are more angry than frightened, because most children have not been abducted; they just don’t want to come home. One call I took was about a black girl who was supposed to come home from her job at a convenience store only a short walk away. When she didn’t show up, the whole family became hysterical.

As I took the report, I had to give up on talking to the mother — only in her thirties — since she curled up into a ball on the floor screaming, while her own mother rocked her back and forth. Hysteria is contagious, and the younger ones started screaming, too. I couldn’t get answers to many of the questions I needed for the report, such as the missing girl’s social security number or blood type. I’ve stopped being surprised at parents’ ignorance about their children after dealing with one mixed-race woman who didn’t even know her own middle name.

Weeping relatives wandered the streets, shouting the girl’s name, even though she had been gone only a few hours. The family got angry with me since they thought I wasn’t doing enough, even though I explained that the best thing I could do for them was to complete the report quickly so the girl could be registered as missing. To calm them, I had other officers start checking the area — a highly unusual move during the report-making process unless someone has seen an actual abduction. Shortly after I left the house to join the searching officers, the family came and told me they had found her. The 16-year-old girl had been hiding, first because she was depressed, but later because she was afraid of the police cars that were looking for her.

At the station, my sergeant asked why I called for additional units to look for her, since that is almost never necessary. I explained what the family had been doing, and he left me dumbfounded when he actually asked: “Were they black?” I said they were, but added nothing else. We all know that a stray comment can end your career, so we avoid any discussion of race at work.

Over the years, I have tried to imagine what goes on in the minds of other officers who do not read websites such as American Renaissance or the rest of the Alt-Right. They do not have a coherent or well-articulated approach to thinking about race. They must think the way many of us did before discovering race realism: They see group differences all the time, but deny them over and over because orthodoxy tells them everyone is the same.

There is just enough truth in this to keep them going. I remember a white father who can only be described as trailer-park trash complaining about his black neighbors. They were dressed respectably and had well-kept lawns, but they had annoyed him by calling us because his very young children were playing outside with unleashed pit bulls. We found this unemployed father asleep with his girlfriend inside his trailer while his children, no older than four, were out by the street.

Examples like these — exceptions to racial patterns — stick with white police officers because they confirm the view we are taught that all races are exactly the same. Meanwhile, blacks have no trouble recognizing patterns. Anytime they hear they “matched a description” of a suspect, their most common reaction isn’t anger; it’s a big smile. Crime is like most things in this country — as immigration continues, it is becoming less of a black-and-white issue. Almost every community in America is affected by massive immigration, legal and otherwise. It is common for me to make a traffic stop and walk up to a driver who does not speak a word of English, despite having lived here for years — sometimes more than a decade. Many don’t have to. If they are Spanish-speaking, they can live in a separate Hispanic society in my area that numbers in the tens of thousands and has its own churches, businesses, and organizations.

The most distinctive thing about Hispanics is how they handle alcohol. One Hispanic man that almost side-swiped me had his car littered with bottles of beer. Another drunk driver I arrested had hit half a dozen traffic cones as he approached an active work zone on the highway. There are plenty of people of other races who drink and drive, but the degree to which Hispanics drink before (or during) driving seems unparalleled to me. I assume this is because of the Amerindian heritage of many Hispanics which gives many of them a weakness for alcohol. Language barriers make it hard to administer a field sobriety test. Sometimes I can call in a Spanish-speaking officer or get an interpreter over the phone, but this works only under certain conditions. You cannot control a hostile crowd through a phone interpreter. Immigration status is not allowed to make any difference in how we treat people; we never ask who is here illegally, and even if we know, it does not affect our investigations.

There are many immigrants who don’t speak English or Spanish. I’ve had people from Bangladesh walk up to my station to report a domestic assault in broken English through a relative. Neither the victim nor the suspect spoke any English, and I initially could hardly write the report since the victim could not tell me where the assault happened. She knew it happened outside of work, but she did not know the address or even the name of the company for which she presumably worked. I didn’t realize such a thing was possible. Neither could read English, but they couldn’t read in their native language, either.

Race and identity always play a role in conflict. With nationally-covered shootings, beginning with Trayvon Martin, the creation of Black Lives Matter, and — most important — the ubiquitous ownership of cell phones with video cameras, the harsh anti-police sentiment will probably last for the foreseeable future. This is the worst it has been since the Rodney King incident.

So long as the police are an implicit force of whiteness, videos of police battling with non-whites will stir anger and result in carnage like the Dallas shooting where five officers lost their lives to anti-white violence. Even when the police are fully in the right, others will not always interpret it that way, especially when race is part of the picture.

White law enforcement officers owe it to themselves to recognize that politics go on whether we take part in them or not, and that includes racial politics. So long as whites as a group refuse to fight for their own interests or even speak honestly about race, the narrative of the white police officer who oppresses others will go unchallenged and remain the story that so many in the media are eager to tell. This will encourage non-whites to attack us. It is absolutely necessary that white officers begin talking about their experiences with each other, so that eventually our voices are heard on the national stage.

View all posts by Tom Andrews

Tom Andrews is the pen name of a police officer in the United States.
< The Alt Right Eyes Its Future And Preps To Professionalize Post-Trump
Comments of the Week, September 10, 2016 >
Blog
Commentary
Videos
Podcasts
Follow us