The Worst Movie Ever Made?

A new horror film, Master, is making waves in the liberal arts scene. It is black woman Mariama Diallo’s first film, and it follows three black women at a prestigious New England college: a freshman (Zoe Renee as Jasmine Moore), an administrator recently promoted to the position of “master” (Regina Hall as Gail Bishop), and a professor seeking tenure (Amber Gray as Liv Beckman). The horror element of the film is that the school is rumored to be haunted — especially freshman Jasmine Moore’s dorm room — which in 1965 housed the school’s first black student . . . until she hanged herself. 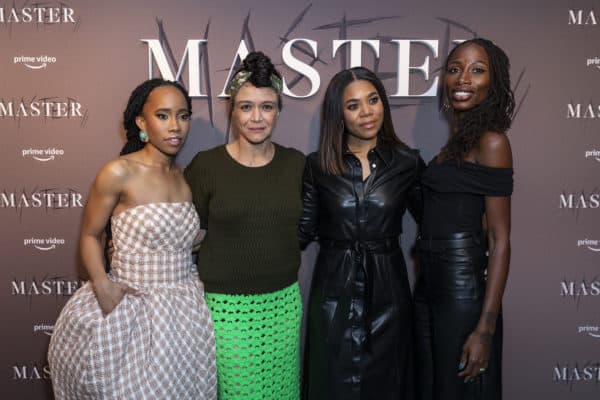 The mishmash of supernatural terror and social commentary is described well by Richard Brody, writing in the New Yorker, “[Master] uses horror-genre devices to reveal the ambient racism pervading American life.” At night, Jasmine has terrifying dreams about monstrous hands clawing at her. During the day, her white peers level micro-aggression after micro-aggression at her: saying she looks like various black celebrities, complaining that her nappy hair clogs drains, ignoring her request to be paid back for the pizza she orders at a party, etc. Administrator Gail Bishop gets the same treatment. Her white colleagues pepper her with condescending liberal comments, telling her that her “voice” is essential at the college, comparing her to fellow black trailblazer Barack Obama, etc. She discovers that her official portrait is being eaten away by bugs, and that her house has an inexplicable maggot infestation.

The movie makes much of these awkward encounters. In one tediously long scene, freshman Jasmine checks out some books from the library. As she walks out the door, she sets off the theft alarm. She turns around and tells the white librarian that this has happened before, and that the alarm is wrong. The librarian does not believe her, and asks her to come back to the front desk so her backpack can be searched. We are obviously meant to feel outrage over these petty indignities, but every time I’ve triggered an anti-theft alarm, employees asked me to go back to the register to figure out what happened.

As the film progresses, all three black women feel more and more isolated. Jasmine can’t make friends with the rich white kids, and there are almost no other non-white students. Gail the “master” feels completely out of place in a new job that surrounds her with bumbling whites. At one point, she screams at a group of them that it’s as if her position is not “master,” but maid. Professor Liv’s quest for tenure is stymied, and she’s accused of being another Rachel Dolezal.

At one point, the word “leave” is carved into the door to Jasmine’s dorm room, and a noose hung from it. Later, a cross is set ablaze in front of her building. The culprit is not found, and the audience is left to wonder if it was a racist student or an evil witch. The message, of course, is that it doesn’t matter: Racism is everywhere and inescapable. In the end, Jasmine is found dead, hanging in her dorm room. Again, we don’t know who is the culprit. Maybe another student did it, maybe evil spirits did it, maybe evil spirits infected her with a suicidal impulse. The message is the same: Racism comes from both people and supernatural forces, making it unavoidable. I enjoyed the film’s mocking of white liberals. However, it’s not clear what the leftist black writer/director Mariama Diallo wants woke whites to do. Surely she wants whites to “celebrate diversity,” “elevate black voices,” and the like. But the whites in her film who believe in these things are mocked for being awkward and insensitive. Much like the white feminists derided by black political commentators, no amount of ethno-masochism or groveling is ever good enough. Perhaps the movie’s only virtue is that it reinforces that lesson — one that liberal whites may eventually learn.

Master is a failure as social commentary. Black students at elite universities are not terrorized. The supposed “hate crimes” they suffer from turn out to be hoaxes. The Ivy League coddles blacks students, allowing them to get away with stunts, such as marching through a school library screaming, “F*** you, you filthy white f***s!” “F*** you and your comfort!” “F*** you, you racist s***!” Blacks who think New England too white can go to an HBCU — there are over 100 of them. Suffering “micro-aggressions” is part of the human condition, not evidence of “institutional racism.” Finally, black women are one of the least suicide-prone groups in the country. In 2020, 70 percent of suicides in America were white men. Here are America’s suicide rates for women by race:

Age-adjusted suicide rates for females, by race and ethnicity: United States, 1999 and 2017. (Source: The CDC)

How about a cinematic examination of what leads an old white guy to kill himself?

Master is another reminder that our cultural elites are disconnected from reality. I hope its absurd exaggerations will get a white audience member or two to question the “huddled clichés” we are expected to believe.

Chris Roberts is the Director of Special Projects at American Renaissance. You can follow him on Gab.
< The Takeover of America’s Legal System
He Misses the Clanking of His Chains >
Blog
Commentary
Videos
Podcasts
Follow us