Recent events in Free State Province show that South Africa is more racially divided than ever. The torture/murder of 21-year old Brendin Horner by two blacks — he apparently caught them stealing cattle — sparked a wave of white protest and indignation not seen in years.

Whites may tweet their anger or post on Facebook but they don’t often demonstrate; they see it as a “black thing.” However, on October 6th, about 3,000 whites, mostly rural Afrikaners, gathered at the town of Senekal where the two suspects, Sekwetje Esaiah Mahlamba and Sekola Piet Matlaletsa were due to appear in court. The two killers and their victim: Mahlamba, Matlaletsa and Brendin Horner.

The shocking cruelty of South African “farm murders” has become infamous world-wide. Gangs of black assailants usually attack a single white or a couple, torture them for hours, and then steal a few things or sometimes nothing at all. Canadian activist Lauren Southern has made a documentary, Farmlands, in which she described some of these grisly murders.

Farm murders are where primal Africa and Marxism meet. For years, media and universities have urged blacks simply to take away farms from their “racist” owners. Emboldened by the official climate of farmer-hatred, black murderers and stock thieves have almost free reign. The murder of young Brendin Horner — his killers tied him to a pole and clubbed and stabbed him to death — appears to have been the last straw.

Emotions ran high in Seneka. Farmers stormed past police and raged at the accused in their holding cells. The police fired two warning shots. None of the farmers flinched, and one shouted in Afrikaans, “Shoot back!” Many farmers were armed.

Afterwards, the liberal media accused the farmers of having fired the shots, but reports, images, and videos spread so quickly on social media that the media lost control of the story, at least in Afrikaans. Not even the mainstream Afrikaans media such as Netwerk24.com dared to adopt the official government line about white “law-breaking thugs” and “racists. Whites who are furious at blacks who tortured a young white to death are, of course, “racists.”

Brendin Horner appears to have fought to the last, breaking his knuckles on his attackers, but he was unarmed. This can be a fatal mistake in rural South Africa. This photo of him with his girlfriend, Lenize Taljaard, has become a symbol of what the Boer people are losing in South Africa. In a YouTube interview, farmer-singer Chris Chameleon said he “was saddened by this murder” and “by all the others that had preceded this one,” but that he was “uplifted” by the large crowd of white protestors, the sense of solidarity, and the message of “enough is enough, we won’t take it anymore.” Mr. Chameleon added: “The good guys also need warriors.” Elsewhere on social media there was a lot of war talk and I do not read it as empty bravado. It was more like the acknowledgement of a reality: Afrikaners or Boers will have to stand together if we are not to die, one by one.

There is also a palpable sense of solidarity that has not existed among our people since before Hendrik Verwoerd was assassinated in September 1966. Afrikaners seem to be setting all their differences aside. Everyone now wants to know how to respond to attacks by black murderers and politicians. 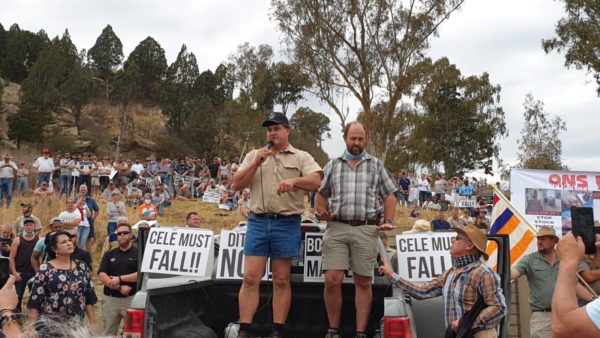 Mr. André Pienaar (with microphone) addressing the crowd in Senekal. Some of the placards read: “(Minister of Police) Cele must fall” and “Boer Lives Matter.”

Some of the white protestors, including André Pienaar who led men into the courthouse in search of the two murderers, were arrested. Within minutes, Afrikaner lawyers were posting phone numbers on Twitter and WhatsApp, offering to help for free. According to the latest news reports today, Pienaar has huge support, not only in the Free State, but countrywide. While the black minister of police, Bheki Cele, described him as a “thug,” to most whites he is a hero for at least offering some symbolic resistance to black supremacy and violence.

There is talk that the October 16 court appearance of the two killers, Mahlamba and Matlaletsa, will be moved from Senekal to the provincial capital of Bloemfontein, where the police have more manpower to deal with rebellious whites.

Mr. André Pienaar’s bail hearing was on Friday, October 9th. Everyone expected him to be charged with “malicious damage to property,” a common charge against black protestors. Except he hadn’t damaged anything; he and his followers had merely entered the court building.

In a travesty typical of the “kangaroo justice” in South Africa I previously wrote about, Mr. Pienaar has been charged with “terrorism” and “attempted murder,” two serious charges for which he could get 10 to 20 years in prison!

For over a century, South African whites have never been in any significant or prolonged confrontation with blacks, apart from quelling riots and foreign-funded terrorism in the days of white rule. But even those riots and terrorism did not change a basic policy of peaceful cooperation.

Now for the first time, after a quarter century of black rule, there is something new. While many blacks, such as Julius Malema and members of the governing ANC elite have often said they were enemies of whites, that message never really hit home. This week, I saw signs that for the first time a significant number of whites are opening their eyes to reality.

Julius Malema, who calls his followers in red T-shirts his “ground forces” tweeted:

Since the government of @CyrilRamaphosa is extremely scared to respond decisively, we are on our own. Next appearance, all ground forces and peace loving South Africans will be in attendance, in defence of our democracy and property. Magwala a chechele morago! Fighters attack! pic.twitter.com/HIddc4gOV3

In 1995, there were 5.2 million whites in South Africa; now only 4.7 million. Many commentators predict the quiet dissolution of the Afrikaner nation. Throughout Afrikaner history there have been rebellions and uprisings, mostly against British rule in the 19th and early 20th centuries. The first and most famous was the Slagtersnek Rebellion of 1815 in the Cape Colony. It set off the Great Trek into the interior and the quest for freedom and an independent republic.

This week reminded me of Slagtersnek, as everything I read in Afrikaans, even in mainstream publications, contained stirring denunciations of the great injustices from which we suffer. This was commonly circulated on social media; in English, it says: “Brendin Horner. Your child is my child. Enough is enough. Stop farm murders.” 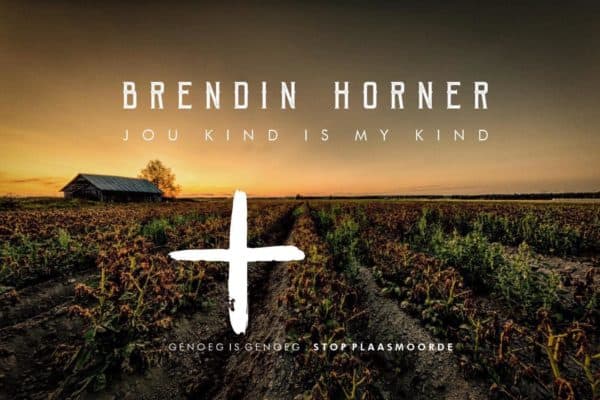 Stopping farm murders will take a huge effort; perhaps a complete revamp of the South African system, a conservative revolution. Afro-Marxism and black supremacy are the enemies of peace and prosperity.

Dr. Roodt studied at the University of the Witwatersrand and the University of Paris. He founded the Pro-Afrikaans Action Group (PRAAG) in 2000 and is the author of a number of books, including most recently, Raiders of the Lost Empire. You can follow him on Twitter @DanRoodt.
< Taking the Red Pill in South Africa
How Racial Preferences Really Work >
Blog
Commentary
Videos
Podcasts
Follow us