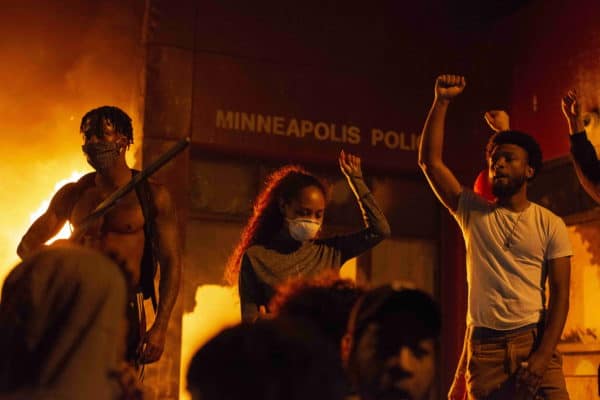 Minneapolis was where the violence began. Governor Walz, in response to a question about whether white supremacists had joined in looting, said that “based on my suspicions and what I’ve seen on this, yes.” He also said drug cartels “are trying to take advantage of the chaos.” Gov. Walz estimated that “80 percent” of those committing crime were not Minnesotans. On May 30, Mayor Jacob Frey said “white supremacists, members of organized crime, out of state instigators, and possibly even foreign actors” were trying to “destroy and destabilize our city and our region.”

We are now confronting white supremacists, members of organized crime, out of state instigators, and possibly even foreign actors to destroy and destabilize our city and our region.

Those claims were never substantiated. An estimated 86 percent of arrests by May 30 were of Minnesotans. None were linked to “white nationalists.” Video evidence of the riots shows many of the looters were black, displaying Black Lives Matter slogans, or flashing what look like gang signs.

It is true that early in the Minneapolis riots, a man with an umbrella and wearing a gas mask smashed windows. Some claimed the man was a cop, which local police denied. Two weeks ago, a search affidavit named a supposed Hell’s Angels member and white prison gang member whom authorities suspect was the “Umbrella Man.” The affidavit says protests were peaceful until he came along, and identifies Mitchell Carlson as “a full-fledged member of the Hell’s Angels” and “a known associate of the Aryan Cowboys,” a “known prison gang.” It notes a “striking resemblance in the eye, nose bridge, and brow area” between Mr. Carlson and “Umbrella Man.”

There’s been no arrest. Journalist Andy Ngo, who has covered the riots and antifa, says people are trying to divert the blame from who was really responsible for the violence in the city.

Further, the intel came by email from an anonymous “friend” of a tipster. That’s very weak evidence.

The sensational headlines we see now are meant to gaslight us until thinking the BLM riots started because of the far-right, & that antifa isn’t real.

Remember how people said Umbrella Man was a cop? Even the Minnesota AG @keithellison entertained this baseless conspiracy theory. Point is, for months now people have been trying to explain away what is clearly a militant using antifa-specific tactics to instigate mass violence. pic.twitter.com/OR5oT9inzh

An affidavit based on an anonymous tip isn’t much of a story. And why hasn’t there been an arrest? Even if Mr. Carlson is arrested and charged, it still wouldn’t be much. A few broken windows are nothing compared to the horrors unleashed across the nation over the last few months. If Mr. Carlson did smash some windows, it doesn’t follow that this inspired others to set the AutoZone and a police building on fire. Nonetheless, there was heavy press outrage.

At least CNN wrote about “riots” and not “a protest.” Still, let’s grant that there may be something in this case. It’s impossible to say that about “white supremacists” rioting in Richmond.

Mayor Levar Stoney claimed “there were white supremacists marching under the banner of Black Lives Matter, an attempt to undermine an otherwise overwhelmingly peaceful movement toward social justice.” Democratic congressional candidate Qasim Rashid echoed this claim on Twitter. Who were these “white supremacists?” Police Chief Gerald Smith said his department “identified some individuals who have been seen with the Boogaloo boys and some antifa groups around the area.” Mayor Stoney appears to think “Boogaloo boys” are “white supremacists.” They aren’t. They are broadly libertarian, anti-government, anti-police, and “anti-racist,” and want to build a cross-racial alliance against the state. Stonewall Jackson in Richmond. The handiwork of white supremacists?

The Virginia Mercury, which says it “generally features progressive commentary,” reported on July 30 that “Richmond officials have presented no direct evidence showing white supremacists organized the protest, encouraged violence, or participated in any property damage.” Police found no “white supremacists” to arrest in Richmond, but did arrest plenty of non-whites. One of the few whites they collared, Molly Conger, is a prominent antifa blogger. This got far less coverage than the non-arrest of a supposed “white supremacist.”

National Public Radio also tried shift the blame. In June, it published an article claiming “right-wing extremists are turning cars into weapons, with reports of at least 50 vehicle-ramming incidents since protests against police violence erupted nationwide in late May.” It sounds like a national campaign by “white supremacists” to kill peaceful protesters, but NPR managed to find only one plausible “racist” out of the 50 incidents. The original photo was one of armed rioters attacking a woman in a car. They were arrested, not the driver. Conservatives, including Donald Trump Jr., noted the mistake; NPR responded with a self-pitying article that accused the President’s son of having “seized on the moment” and saying he’s “known for his propensity to speak to the fringes of the political spectrum.” NPR changed the photograph to one of the aftermath of the Unite the Right rally in 2017; it had to go back three years to find something that fit its slant.

Democratic officials and many journalists refuse to blame Black Lives Matter or antifa for mob violence. They want to blame “white supremacists,” and if none exist, they conjure them up.

Robert Hampton is a contributing editor at American Renaissance. He is a Middle American who chose to wake up.
< The Wisdom of Sam Francis
Store Forced to Back Down from Plan Charging Whites Special Fee >
Blog
Commentary
Videos
Podcasts
Follow us