Who’s to Blame for the Mess in Puerto Rico?

Puerto Ricans are blaming President Trump for the fact that two weeks after Hurricane Maria, their island is still a mess: power outages, flooding, fuel shortages, spotty cell service, washed out bridges, roads blocked by fallen trees. But who is really to blame for the island’s paralysis?

Consider this: Puerto Rico has a population of only 3.4 million but their elected government has run up a debt of over $70 billion and pension obligations of $50 billion. That’s more than $35,294 per resident and over 100 percent of GDP. Puerto Rico has already defaulted on a $58 million bond payment in 2016, due to its already-high taxes and unwillingness to cut government spending. It fell into crushing debt despite the $21 billion annually the island receives in aid from the United States, much of it spent on welfare programs such as Head Start, public housing, and food stamps. That’s over $6,000 per capita in federal welfare that the islanders consume. And due to the special status of the island, Puerto Ricans do not even pay federal income tax.

Borrowing and US handouts sustained the welfare habits of the people, but Puerto Rico left its infrastructure embarrassingly outdated. According to the Los Angeles Times, Puerto Rico’s electrical grid is so starved of physical and human capital that it suffers from power outages four-to-five times the average — even in good weather. Puerto Rico also failed to invest in infrastructure to protect against flooding. The island has few floodwalls and dangerously weak dams — a dam on the island cracked following the hurricane, forcing the evacuation of more than 70,000 people.

These problems were foreseeable and preventable, but liberals and Puerto Rican officials are blaming Donald Trump. Perhaps he is being too nice. Puerto Rico created its own problems; why should we be on the hook for them? 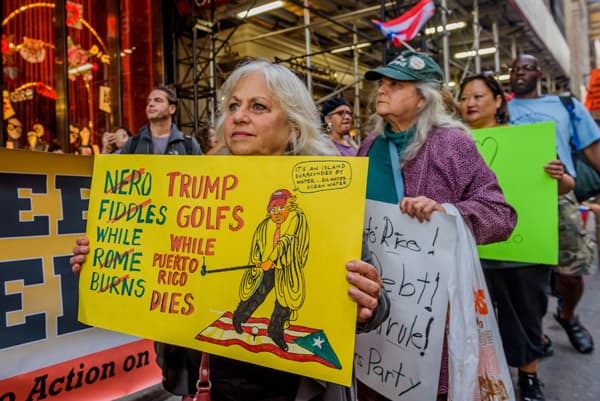 After acquisition by the United States following the Spanish-American War in 1898, the island’s residents never integrated with Americans culturally, linguistically, or racially. Puerto Ricans are culturally Hispanic, racially a mix of Spanish colonists, African slaves and Taino natives, and most of them don’t speak any English. They may technically be United States citizens but they share little common history or ancestry with Americans and are clearly a nation that developed separately from our own. And what could indicate a clearer sense of alienation from the United States than the fact that Puerto Rico has its own Olympic team?

Puerto Ricans, meanwhile, have many gripes with what they perceive as their American overlords. For example, even before this latest hurricane-induced crisis, a major problem for Puerto Rico was their inability to conduct trade independently. According to U.S. law, goods must travel between Puerto Rican and mainland American ports on American-made vessels before they are exported or imported. This weakens Puerto Rico’s economy.

The best solution would be to let Puerto Rico become an independent country, free to make its own decisions and responsible for its own problems. This could be done amicably and generously. Since we pay the island tens of billions of dollars every year in welfare payments, we could easily pay off their debt and give them post-hurricane humanitarian aid as incentives to independence.

We could also offer remigration cash incentives for Puerto Ricans living in America who are willing to give up their U.S. citizenship and move to the island. This would not only be an opportunity for the Puerto Rican diaspora in the United States to reunite with their people, but also a great way to reverse the brain-drain. Over the past century, many of the more intelligent and hard-working Puerto Ricans moved to the mainland for better opportunities. The 2010 U.S. Census counted the number of Puerto Ricans living in America at 4.6 million, making it America’s second-largest Hispanic group after Mexicans. This represents a tremendous loss in cultural, economic, and human capital for the island.

Finally, we could offer military protection and economic advice for a couple decades. Chile took economic advice from free-market economists from the University of Chicago and the economy boomed. With the right advice and incentives, Puerto Rico could experience a similar economic rebound.

Separation would come with an expensive up-front price tag for us, but it would save Americans money in the long run and would give Puerto Rico full control over its culture and destiny.

View all posts by Alex Witoslawski

Alex Witoslawski is a first generation American and political activist living in Detroit. His political work was instrumental in bringing free speech law suits against several universities.
< One-Third of Eligible 154,200 DACA Recipients Have Not Filed for Renewal
Whites Are Underrepresented Among Mass Shooters >
Blog
Commentary
Videos
Podcasts
Follow us