Trump on Immigration: No Retreat!

Last night the roars of applause in the Phoenix Convention Center were rivaled only by the sighs of relief from race realists and immigration patriots all over the country. Donald Trump, fresh from a meeting with Mexican president Enrique Peña Nieto that even his critics considered a success, delivered what Ann Coulter called “the most magnificent speech ever given,” setting minds at ease after hinting for the past week at a possible “softening” on immigration.

Setting the tone for his speech, Mr. Trump challenged the standard view of immigration:

The truth is, the central issue is not the needs of the 11 million illegal immigrants–or however many there may be. . . . To all the politicians, donors and special interests, hear these words from me today: there is only one core issue in the immigration debate and it is this: the well-being of the American people. Nothing even comes a close second.

Mr. Trump’s proposals flowed from this “America first” approach. He reinforced his hallmark positions, promising to build a “tall, powerful, beautiful wall” on the southern border (complements of Mexico), temporarily suspend immigration from countries compromised by terrorism, target illegal alien criminals for deportation, and end “catch and release.” He also touched on a few more obscure policies, promising to restore the Secure Communities program and improve 287(g) partnerships between ICE and state and local police. Most important from our perspective, however, are his fleshed-out plans for removing otherwise law-abiding illegals and limiting legal immigration.

Mr. Trump ruled out amnesty, saying those illegals seeking legal status “will have one route and only one route: to return home and apply for re-entry under the rules of the new legal immigration system that I have outlined.” He did say that “[i]n several years, when we have accomplished all of our enforcement goals” and “illegal immigration is a memory of the past,” “only then will we be in a position to consider the appropriate disposition of those [illegal aliens] who remain.” But his enforcement goals should already have forced the vast majority of illegals out of the country.

Rather than call for mass removal of all illegals–a position that makes even some hardliners squirm–Mr. Trump brilliantly called for a gradual approach, setting enforcement mechanisms and deportation priorities in place that effectively amount to the same thing. He emphasized that “anyone who has entered the United States illegally is subject to deportation,” but that his priorities would be:

criminals, gang members, security threats, visa overstays, public charges–that is, those relying on public welfare or straining the safety net, along with millions of recent illegal arrivals and overstays who’ve come here under the current Administration.

Left unsaid, however, was what portion of illegal aliens falls under these priorities. Here are some numbers: 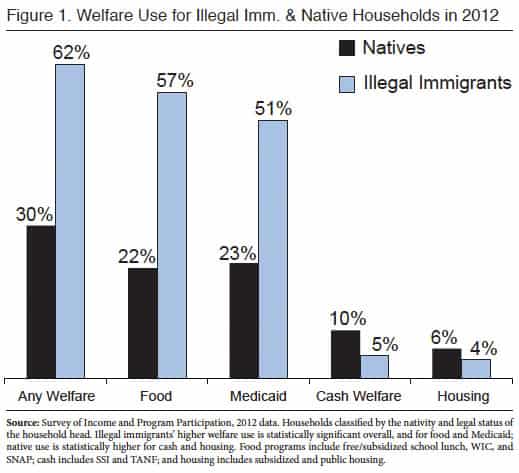 It’s possible that nearly all illegal aliens will fall under one or another of these priorities. The media will hesitate to point this out, however, because admitting a majority of illegal aliens are either criminals or rely on the dole would prove Mr. Trump’s point that Mexico “isn’t sending their best.”

In order to carry out his policies, Mr. Trump proposed adding 5,000 new Border Patrol agents and tripling the number of ICE deportation officers.

The illegal aliens who are not priorities for deportation may be squeezed out of the country anyway. Mr. Trump promised to “ensure that E-Verify is used to the fullest extent possible under existing law, and will work with Congress to strengthen and expand its use across the country.” Mr. Trump noted that immigration law exists in part to protect the work-site, and that “if we only enforce the laws against crime, then we have an open border to the entire world.” Workplace enforcement alone would ensure mass self-deportation, particularly among illegals who are not on welfare.

While Mr. Trump was vague on how he would reform laws governing legal immigration, he hinted at lower numbers and increased quality of legal immigrants. He said we must “control future immigration . . . to ensure assimilation, integration and upward mobility.” He noted earlier in his speech that “not everyone who seeks to join our country will be able to successfully assimilate,” implicitly rejecting the idea that the US has “magic dirt.” He called for a new immigration commission with these priorities:

Combined with the strong enforcement detailed above, these reforms will slow the demographic transformation of the US and may be a stepping stone to a true American Renaissance.

Toward the end of his speech, Mr. Trump sounded a note of foreboding:

This election is our last chance to secure the border, stop illegal immigration, and reform our laws to make your life better.

This is it. We won’t get another opportunity–it will be too late.

Mr. Trump then introduced relatives of people who have been murdered by illegal aliens–deaths that he noted would have been impossible if his policies had been followed. It was a powerful reminder of the direct, personal cost of illegal immigration, and in their brief remarks several “Angel Moms” noted that Donald Trump is our last chance to save our country.