There are still many questions about last week’s election. Much of the press is dismissing the possibility of any “irregularities,” but Attorney General William Barr is not.  On Monday, he issued a memo on “Post-Voting Election Irregularity Inquiries.” Here it is:

Last week, our nation once again demonstrated the strength of our democracy as more than 140 million Americans cast ballots to select their leaders. I want to thank each of you and your teams for your extraordinary efforts to ensure that all Americans could exercise this most fundamental of rights with confidence and in safety.

Now that the voting has concluded, it is imperative that the American people can trust that our elections were conducted in such a way that the outcomes accurately reflect the will of the voters. Although the States have the primary responsibility to conduct and supervise elections under our Constitution and the laws enacted by Congress, the United States Department of Justice has an obligation to ensure that federal elections are conducted in such a way that the American people can have full confidence in their electoral process and their government.

The Department’s general policies with regard to election fraud investigations are contained in the Justice Manual. Those policies require, among other things, consultation with the Public Integrity Section’s Election Crimes Branch (“ECB”) in some instances. Those policies already allow preliminary inquiries, including witness interviews, to be conducted without ECB consultation. In instances in which they are consulted, the ECB’ s general practice has been to counsel that overt investigative steps ordinarily should not be taken until the election in question has been concluded, its results certified, and all recounts and election contests concluded. Such a passive and delayed enforcement approach can result in situations in which election misconduct cannot realistically be rectified. Moreover, this ECB practice has never been a hard and fast rule, and case-specific determinations and judgments must be made. While most allegations of purported election misconduct are of such a scale that they would not impact the outcome of an election and, thus, investigation can appropriately be deferred, that is not always the case. Furthermore, any concerns that overt actions taken by the Department could inadvertently impact an election are greatly minimized, if they exist at all, once voting has concluded, even if election certification has not yet been completed.

While it is imperative that credible allegations be addressed in a timely and effective manner, it is equally imperative that Department personnel exercise appropriate caution and maintain the Department’s absolute commitment to fairness, neutrality and non-partisanship. You are the most senior leaders in the United States Department of Justice and I trust you to exercise great care and judgment in addressing allegations of voting and vote tabulation irregularities. While serious allegations should be handled with great care, specious, speculative, fanciful or far-fetched claims should not be a basis for initiating federal inquiries. Nothing here should be taken as any indication that the Department has concluded that voting irregularities have impacted the outcome of any election. Rather, I provide this authority and guidance to emphasize the need to timely and appropriately address allegations of voting irregularities so that all of the American people, regardless of their preferred candidate or party, can have full confidence in the results of our elections. The American people and the leaders they freely elect deserve nothing less. 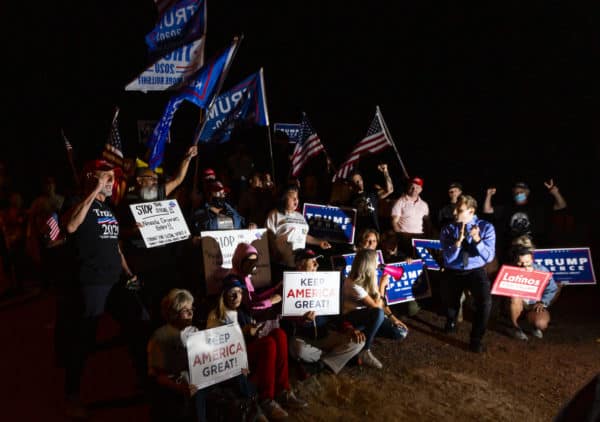 There will be a rally in Washington, DC this Saturday to support the President. I encourage American Renaissance readers to attend these events. If nothing else, they will be a chance to meet whites who are not afraid to voice controversial opinions.

Chris Roberts is the Director of Special Projects at American Renaissance.
< Who Owns the Future? Dems or GOP?
America’s Social Credit System Is Worse than China’s >
Blog
Commentary
Videos
Podcasts
Follow us