In the small town of Hancock, Maryland, a local bar called the “Town Tavern” has for years displayed two outdoor paintings of the Confederate battle flag. The bar closed recently, but the murals stayed up. Then last month, the mayor of Hancock, Ralph Salvagno, decided to cover them with red spray-paint. 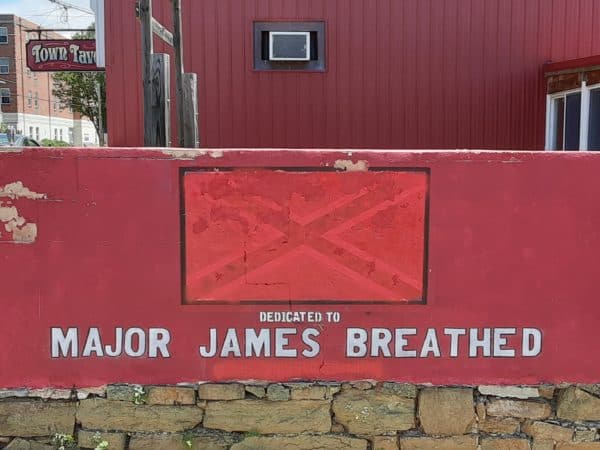 Maj. Breathed grew up near Hancock and attended the University of Maryland. He served with the South during the Civil War, and moved to Hancock afterwards, and is buried there. Though technically a Northern state, Maryland was sympathetic to the South . President Lincoln used very authoritarian tactics to keep the state in the union — including having dozens of members of the state legislature arrested. Curiously, the Mayor forgot to desecrate the battle flag that serves as this mural’s background.

The owner of the property, Billie Jean Fisher, filed a police report, and in an apparent moment of hubris, Mayor Salvagno, who is white, admitted that he had done it, proclaiming, “I think I did the right thing.”

He has been charged with malicious destruction of property, and faces up to 60 days in jail and a $500 fine.

Remember: You can fight back.

View all posts by Stanley Hornbeck