And other lefty hysterics.

The current Supreme Court has sent the Left into apoplexy with rulings that do nothing but pay attention to what’s in the Constitution. And, as usual, whatever the Left doesn’t like is “white supremacy.” If anything, the screaming about it is even more stupid and hysterical than usual.

Overturning Roe v Wade is the main reason for outrage but was, in my non-lawyer’s view, obviously correct. The justices who voted for Roe in 1973 based their ruling on a so-called “right of privacy” that had lain undiscovered in the Constitution until it was finally brought to light in a different case in 1965. Justice William Douglas, speaking for the full court, admitted that this new right had been detected among the “Emanations from a Penumbra” emitted by rights the Constitution actually did guarantee. At the time, even Time magazine worried about “a shaky new ‘right of privacy’ concept that is bound to baffle judges for many more years.”

It was on these shaky grounds that the court ruled eight years later in Roe that every state legislature that had limited abortion had got it wrong, and that American women had a federally guaranteed right to an abortion.

You can be in favor of abortion but realize how crazy it is to think there’s a Constitutional right to one, right up there with free speech and bearing arms. But furious lefties have spent the last two months demonstrating menacingly in front of the homes of justices, and acting as if the Supreme Court had banned abortion. 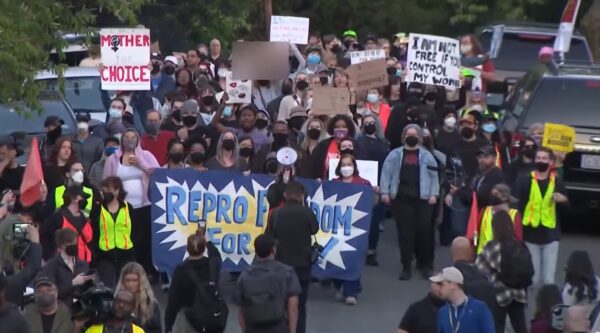 Of course, it didn’t do that. It said only that it’s up to the people’s elected representatives to decide, not nine judges. The Left loves judicial dictatorship when the decrees go their way.

But where’s the white supremacy?

MSNBC had an article called “These were the Supreme Court’s most disastrous rulings this term.”

“This term.” Maybe next term, the Court will snuff out all human life. This term, it unleashed “rulings that functionally drag the United States back to a bygone era where old, white, rapacious Christian men controlled everything — from Americans’ wombs to their water supply.”

However, six of the seven justices who voted for Roe in 1973 were white, rapacious, Christian men, joined by a black Christian man. This time, only four white rapacious Christian men voted to overturn Roe, and they were joined by a black man and a woman. So, I don’t understand.

Ja’han Jones ends his article with this: “The court now takes a three-month recess before getting back to demolishing democracy and rolling back our rights.”

Here is another black writer, Mara Gay, on the editorial board of the New York Times: “The Republican War on Sex.” Not a war on women; a war on sex. She complained about “puritanical tyrants seeking to control our bodies,” and says that people who oppose abortion have “an insatiable desire to punish women who have sex on our own terms and enjoy it.” She didn’t quote a single person who says such a thing, but adds that the right to an abortion is “essential to the fight against white supremacy and its insidious attempts to control the lives and bodies of Black people.”

I don’t understand how fighting for abortions is the same thing as fighting white supremacy.

And so I turned to NBC News to find out why “Black women will face the worst of Roe’s Reversal.” The author is Curtis Bunn, who writes for NBC BLK about race, so I figured he would know, but all he said was that, on average, blacks are poorer than white women, so it will be harder for them to travel out of state for an abortion.­

But he did find a black pastor who said that the court’s “decision compounds racist practices that have bedeviled Black families for centuries,” and that “the Centers for Disease Control and Prevention calls racism a public health crisis.”

­So there’s bound to be white supremacy in the ruling somewhere.

On the court that just overturned Roe were three women, two Jews, a Latina, a black, and the only protestant, Neil Gorsuch, is a convert, so I was eager to know how this bunch had resurrected white supremacy.

That’s false to begin with. Voting and property rights were state matters, and women could certainly own property. In some states, they could vote, as could some blacks in the north. The argument in this article is simply this: The 18th century white men who wrote the Constitution were white supremacists, so they were probably wrong about everything. Therefore, anyone who thinks the Constitution should mean what they thought it meant is also a white supremacist. The author of this boneheaded article is a white man, Baynard Woods. He is so ashamed of his family names — slave owners on both sides of the family — that he writes them with a line drawn through them. As you will recall, Ja’han Jones says that next term, the court will “get back to demolishing democracy and rolling back our rights.” I imagine the right Ja’han is most worried about is the right to racial discrimination in his favor. Because next term, “Affirmative Actions Could Soon Be Overturned As Supreme Court Takes Up Harvard And UNC Cases.”

I did an entire video on Joseph Biden’s executive order to all the federal departments and agencies to build “equity,” which means discrimination against whites, into every government function. From the US-Japan Friendship Commission to the CIA, every branch has turned in an “Equity Action Plan” to this lady, Shalanda Young, at the Office of Management and Budget, czarina for rooting out government white supremacy. Blacks — but not whites — will get help with down payments, closing costs, and even emergency money to avoid foreclosures. ­­

You probably never heard about it, but Congresswoman Maxine Waters sponsored a bill in the House to give the Federal Reserve a new job.

It “must carry out its duties in a manner that supports the elimination of racial and ethnic disparities in employment, income, wealth, and access to affordable credit.”

Every move the fed makes has to eliminate disparities, because only racism could cause them. The bill passed the House 215 to 207 but is languishing in the Senate.

And you will remember that under Mr. Biden, “USDA Launches Loan-Forgiveness Program for Minority Farmers.” That was going to be $4 billion, but not one dime for whitey. And this: “Biden Will Prioritize ‘Brown and Black Communities’ for COVID Vaccine.” And this: “One of world’s largest investment firms will need permission to hire White men.” There’s no end to this stuff.

What would happen if the Supreme Court ruled that the 14th Amendment’s “equal protection of the laws,” and the Fifth Amendment’s due process clause applied to white people. That wouldn’t be merely “originalist;” it would be obvious, and based on very clear federal civil-rights laws. It has taken the most breathtaking, contortionist reasoning ever to rule otherwise.

Is it fantasy to think the Supreme Court could end legal, racial discrimination against whites? Maybe not. The legal reasoning would be even easier than overturning Roe, and a majority with the guts to pitch that decision — one of the Left’s all-time-favorites — has the guts to do just about anything.

I’d love to see it happen. I can already hear the bellowing and roaring about “white supremacy,” and predictions that the court will bring back slavery next. This is Joseph Biden’s America, after all, where treating whites equally is a curse and an abomination. Actually, this has been America ever since Richard Nixon. Whitey has been in the back of the bus for so long, you youngsters can’t remember a time when you weren’t in the rumble seat.

But do I detect a faint aroma of fairness in the air?

Jared Taylor is the editor of American Renaissance and the author of Paved With Good Intentions, White Identity, and If We Do Nothing.
< Latest Symptoms of a Disintegrating Nation
An Adoption Story >
Blog
Commentary
Videos
Podcasts
Follow us