One Year Since the Capitol Riot — Biden Asks the Right Question

But is all wrong anyway.

It’s been a year since the January 6th Capitol riot, so we are getting stiff reminders of how awful it was. The New York Times anniversary cover story said it was “an anti-democratic insurrection,” and “an attempt to overturn democracy” that “forced lawmakers to flee for their lives.” As if the guy with the horns was going to gore them all to death. CNN now calls it “an unprecedented assault on democracy.” Representative Bennie Thompson of Mississippi says, “Our democracy was inches from ruin.” He is chairman of the January 6 committee, so he should know.

The Atlantic Council just put out a big report about the rioters called “After the Insurrection.” Its conclusion? “The threats they pose to the nation’s security and democratic foundations remain a paramount concern.”

Last week, the Canadian magazine Maclean’s had a headline: “Was Jan. 6 the beginning of the end for America?” It quotes an author who says, “I think January 6 might just have been the new Fort Sumter.”

In its anniversary article, the Washington Post quotes FBI director Christopher Wray: “It’s behavior that we, in the FBI, view as domestic terrorism.” 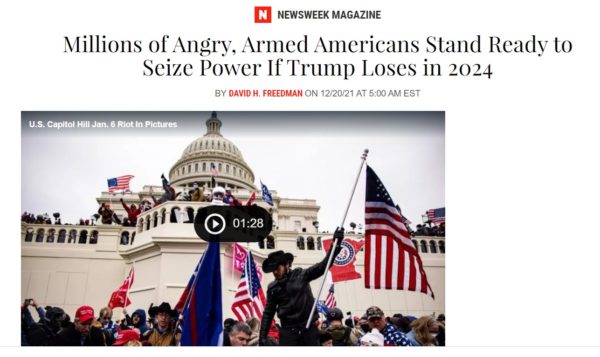 Wow. Newsweek warns that these people are “overwhelmingly male and white.” The army will have to shoot them, but Newsweek worries that troops might not want to kill Americans.

Jamin Raskin, who led the second impeachment of President Trump, is so worried about Trump supporters that he has ordered books on cults and deprogramming. President Joe Biden marked the day by asking, “Are we going to be a nation that lives not by the light of the truth but in the shadow of lies?” Good question. Let’s start with the word “insurrection.” It was obvious from the start, that this was a leaderless rabble that managed to break into the Capitol. Even the FBI eventually had to admit to the Washington Post that the vast majority of participants “didn’t have a plan” to overthrow the government: “They didn’t know what they were doing. A lot of them didn’t even know where they were going.”

And they weren’t attacking democracy. They thought they were restoring it. Even today, 58 percent of Republicans think the election was stolen. (And don’t forget that in a fall 2017 Post-UMD poll, 67 percent of Democrats and 69 percent of Hillary Clinton voters said Trump wasn’t legitimately elected president.) We hear over and over again about the “deadly” assault on democracy – except that the only people who died that day were demonstrators. Two heart attacks, an accidental overdose — and Air Force veteran Ashli Babbitt, shot to death by a black officer. For weeks, the media claimed Officer Brian Sicknick was beaten to death with a fire extinguisher, but he died the next day of natural causes: two strokes.

One bit of almost universal idiocy that has been quietly dropped is the idea that this was all ab out white supremacy – but idiots remain. James Wallis, chair of the Faith and Justice Center at Georgetown University, told NPR that the riot was not only a coup in the name of the “big lie about the election.” “[T]he bigger lie in whose name this was done was racism in the ideology of white Christian nationalism.” One thing that’s obvious – but hotly denied – is that the people who entered the Capitol are being treated completely differently from BLM rioters. First of all, the Justice Department launched the most massive manhunt in American history to catch them. It plastered their faces on bus shelters, and asked for – and got – hundreds of thousands of tips from the public. NPR reports a year later that there are still “Amateur sleuths helping to identify suspects.” There are hundreds of these so-called “sedition hunters.” You see, the FBI thinks 2,000 people were in the Capitol, and only 710 have been arrested. Gotta get ’em all! And once they’re got, are they mistreated?

I will say only that Kathleen Landerkin, Deputy Warden of the DC jail where Jan 6 rioters are held just deleted her twitter account, where she said such things as “Fuck everyone who supports Trump.” And that last November, US District Judge Royce Lambeth held the authorities of the DC jail in contempt, and asked for an investigation of whether Jan 6 prisoners are being abused.

Court procedures have been completely different for them. Even the lefty Guardian had to concede last April that “Most charges against George Floyd protesters dropped.” It writes, “In most of a dozen jurisdictions examined, at least 90% of cases were dropped or dismissed. In some cities, like Dallas and Philadelphia, as many as 95% of citations were dropped or not prosecuted.” Including felony charges.

Portland, Oregon had some of the worst rioting, and Multnomah County has a nice graphic to show what a soft touch it’s been. Of the 1,111 cases referred by local prosecutors, it rejected 898, or 81 percent. In 706 of those cases, rejections were not because of lack of evidence but were “in the interests of justice.”

In other words, “They’re guilty as charged, but we’re just not going to prosecute.”

When rioters in Portland attacked the federal courthouse night after night, local police gave up trying to stop them, so the Trump administration arrested 96 of them. By April last year, after the Biden people had taken over, the Wall Street Journal reported that “Almost half of federal cases against Portland rioters have been dismissed.” Many violent offenders got community service and the charges completely wiped from their records. Some of these people had admitted to attacking officers. The rest are likely to get off, too. So what’s happening to the Jan sixers? As of Dec. 16, there had been 710 arrests. Look at the lower right, the 75 charged with using a “deadly or dangerous weapon.” Not one was a firearm. Flagpoles, crutches, police shields, sticks. But look in upper right: “Charged with corruptly obstructing, influencing or impeding an official proceeding.” What’s that? As the Wall Street Journal explains, because most of the people arrested so far just ambled in, “To Prosecute Jan. 6 Capitol Rioters, Government Tests Novel Legal Strategy.”

It trotted out a provision of the 2002 Sarbanes-Oxley Act, that was passed after the Enron collapse and imposes up to 20 years of prison on anyone obstructing an “official proceeding.” It had never been used against rioters – until these guys got slapped with this exciting new felony.

The most famous guy to plead guilty to it is Jacob Chansley, the “QAnon shaman.” He wasn’t violent and didn’t break anything. He just walked around and hooted and prayed. He was held in jail for 11 months and then sentenced to another 3-1/2 years. If he “obstructed an official proceeding,” everyone did. It looks to me like he is being punished for his costume.

Sentencing is a crapshoot.

Politico has a database of every defendant. As of January first, 150 had pleaded guilty and 71 had been sentenced. Thirty people got jail time. Most of the sentences so far are for the obscure federal misdemeanor of “Parading, demonstrating, or picketing in the Capitol building,” of which everyone is presumably guilty. A lot of people got probation, but two got as much as six months in the big house. Why wasn’t the shaman just “parading?”

You are likely to be punished more severely if you are charged with “entering a restricted federal building.” But didn’t everyone do that, too?

Part of the crapshoot is who does the sentencing. Take Judge Tanya Chutkan, a black Obama appointee born in Jamaica. Judges almost never impose a harsher sentence than the one the prosecution demands – and these prosecutors have been bloodthirsty – but Judge Chutkan has done it seven times. In one case, prosecutors wanted three months of house arrest. She said no. The plaintiff was part of “a violent mob seeking to overthrow the lawfully elected government” and “sitting at home” wasn’t punishment enough. She gave him 45 days in the slammer.

The judge you want is Trevor McFadden, who complained how lightly BLM rioters got off. Prosecutors wanted 60 days in prison for Andrew Ericson, whose worst crime was stealing a beer from Nancy Pelosi’s refrigerator. Judge McFadden gave him 16 days – and only on weekends so he won’t lose his job.

But white judges can be fierce, too. Tam Dinh Pham, was an 18-year Houston police veteran who walked into the Capitol and took selfies. “Your role was very minor on that day,” Judge Timothy Kelly told him at sentencing. “On the other hand, without people like you, the collective force of the mob would not have been the same.” What? He wasn’t in uniform. He lost his job, his pension, had to pay $1,500, and spend 45 days in prison.

The real test will come when Proud Boys and Three Percenters go on trial. Libs want them locked up for ever. As the Boston Globe wrote in December, “A year after a seditious insurrection, why won’t federal prosecutors treat it that way?” The author is full of blather about “white supremacy,” “attack on democracy,” “deadly insurrection.” So, we’ll see.

I’ll close with Joe Biden again: “Are we going to be a nation that lives not by the light of the truth but in the shadow of lies?” Uncle Joe, your pals have already answered that question for us.

Jared Taylor is the editor of American Renaissance and the author of Paved With Good Intentions, White Identity, and If We Do Nothing.
< Verified Hate: Capitol Riot Edition
How I Stopped Being a Leftist >
Blog
Commentary
Videos
Podcasts
Follow us