The Terrible Cost of Willful Ignorance

Skeptic is a quarterly magazine that debunks irrational beliefs. It is affiliated with the Skeptic Research Center, which just published a report called “How Informed are Americans about Race and Policing.”

The survey asked “How many unarmed black men were killed by police in 2019?” Stop and ask yourself: Do you know the right answer? Your fellow citizens could chose among five answers: Thirty-three percent chose the lowest figure of “About 10”. The most common answer, “About 100,” got 38 percent, and 29 percent thought the number was 1,000 or 10,000 or even more. The correct answer is in the Washington Post’s database on police killings. And when you search for the year 2019, black, unarmed, male, as you can see at the bottom line, the number is 11 people shot and killed by police. 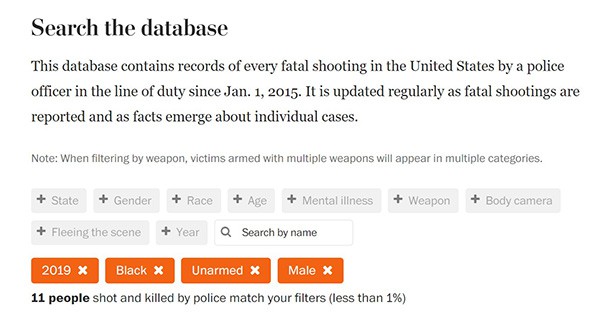 That means most the common answer in the survey – one hundred – was about ten times higher than the correct answer, and about a third of Americans think police killed a thousand or more unarmed blacks.

There’s more to it than that. The more liberal you are, the more likely you are to be hopelessly wrong. This table shows how people answered, according to their political orientation. 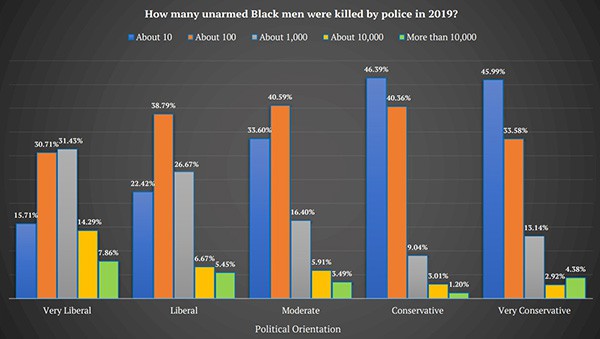 Look at the left, the “very liberal” people. Only 15.71 percent got the right answer – that’s the blue column, which is “about 10”. The most popular number for “very liberal” people was the gray bar. They think police shot and killed 1,000 unarmed black men. The next bar, the yellow one, is the 14.29 percent who think police killed about 10,000 black men in a single year, and 7.86 percent thought police killed more than 10,000. Look at the other political orientations – listed left to right at the bottom – and pay attention to the blue bars, which represent the correct answer of ‘about 10.’ The more conservative you are, the more likely you are to get it right, with a little dip for the “very conservative.” But among even the *best informed* people, the “conservatives,” not even half knew the right answer – only 46.39 percent. 40.56 percent thought the figure was one hundred, or ten times what it really was, and 13-1/4 percent – that’s the total of last three lines – gray, yellow, and green – thought police had killed 1,000, 10,000 or even more.

Ignorance has consequences. As you know, when George Floyd died in May last year, the country erupted in riots and looting. At least 200 cities had to impose curfews. There were billions of dollars in insured losses – and who knows how much in uninsured losses – making it the worst civil unrest in US history. More than 30 states and the District of Columbia – the ones in orange – had to call out the National Guard to keep the peace. That was nearly 100,000 men, making it the largest military operation other than war in American history.

This is the memorial where George Floyd died. He has become a saint. His funeral was a massive affair and he was buried in a gold casket.

Did all this have anything to do with the wildly exaggerated ideas people have of the number of unarmed black men the police kill every year? Don’t forget, more than half of Americans think the number is 10 times, 100 times, even 1,000 times greater than it actually is, and probably think the police never kill unarmed white people. Well, the Washington Post database tells you that in 2019, when police killed 11 unarmed blacks, they also killed 23 unarmed white men and 10 Hispanic men. That doesn’t get much coverage, does it?

Every year, police kill about 1,000 people total. About 950 of them are armed and clearly dangerous. Blacks are about one quarter of the total killed, and this is less than you would expect from their rates of violent crime and how often they are arrested.

The Washington Post had this information – anyone could have found it. But when the rioting started, did big media say, “Uh, fellows, there is no plague of racist police shootings. Calm down”? No. Here’s the Washington Post *at the height of the riots*: “America has always known about systemic police brutality. Will we finally do something about it?” Do you think this article mentioned the numbers from the Post’s very own database? Of course not. And just last week, an article about “black men and boys killed by police” starts with these words: “Police shooting and killing Black males is all but a centuries-old American tradition among law enforcement in the U.S.” No one would dare run that headline if people knew the truth. Every cop in America knows that if he shoots a black man it could ruin his life.

I work for American Renaissance, one of the few organizations that publishes facts about race and crime. And what does it get us?  A website called Media Bias/Fact Check says this. The yellow dot in the red means we are on the “extreme right.” Our factual reporting is low, and we are a questionable source. That’s what you get for telling the truth. But our readers know how many blacks are killed by the police.

You will recall that the more liberal someone is, the more likely he is to have completely crazy ideas about police killings. And what would you call the media? Liberal? Very liberal? They sympathized with the rioters — not the police — because the rioters were fighting police racism. Imaginary police racism.

Would the truth have made any difference? Here’s a clip from a video by Ami Horowitz, who went to a BLM rally and explained the facts about police shootings. [1:41 – 3:15 ]

That is the liberal mentality. These white people are so caught up in the virtuous excitement of fighting racism that they don’t want to hear the facts.

I suspect people in media think the same way. They ignored the truth – for years – and when the rioting started, they sat on the facts. They called the police racist, looked smug, and America burned.

The police reaction was, “Gosh, if we do our jobs, we’re called racists, and our cities go up in flames.” So they pulled back. The result was the biggest one-year jump in murders ever. ­­­And almost all the additional dead people were black men. Has that sobered the media? Not one bit.

And a closing remark. In just a few days, jury selection will begin for the trial of Derek Chauvin, the Minneapolis police officer who restrained George Floyd with a knee to the neck. And here’s the news from that city: “Minneapolis fortifying buildings with fencing, concrete barricades, and razor wire before Chauvin trial. City leaders say National Guard soldiers will also be in Minneapolis.” Stores are boarding up.

Gee. Why is that? Because everyone knows that if Officer Chauvin is not convicted of murder, the city – the country – will blow up. But the media have been telling us for nearly a year that Floyd was murdered, so conviction will be a cinch, right? Maybe not. Media hardly mentioned it when three months after Floyd died, an autopsy report came to light. “New court docs say George Floyd had “fatal level” of fentanyl in his system. Defense attorneys argue drug overdose and pre-existing health conditions caused Floyd’s death.”

The evidence could show Derek Chauvin is *not* guilty beyond a reasonable doubt. But what Minneapolis jury would dare find him innocent? Every juror will know that would unleash a storm of violence. Every juror will know that if he votes the wrong way it could put his very life in danger. That’s why there is no chance of a fair trial, and why an innocent officer could be locked up for years – to appease the mob.

Because for the media – and for liberals – facts and the truth don’t matter.

Jared Taylor is the editor of American Renaissance and the author of Paved With Good Intentions, White Identity, and If We Do Nothing.
< House Passes Expansive Policing Overhaul Bill Named in Honor of George Floyd
Terror at the Capitol! >
Blog
Commentary
Videos
Podcasts
Follow us