Easyjet Worker, 28, and Her Daughter, 3, Strangled to Death ‘By Her Ex After She Dumped Him’ 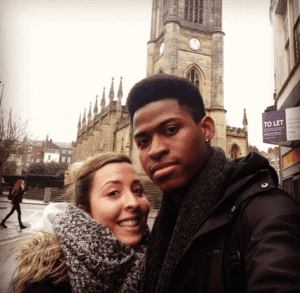 A worker at easyJet and her three-year-old daughter were found strangled to death at their home in Spain.

Police arrested Monica Linde’s partner today (Tuesday, January 7) after making the gruesome discovery when they were called to the flat the couple shared with their daughter Ciara, in Esplugues de Llobregat, near Barcelona’s El Prat airport.

Monica, 28, is understood to have started working for easyJet at El Prat airport last August after spending time living in London where she was employed at Zara Home and also had a job as a barmaid.

Detectives confirmed the suspect, who has been named locally as Ruben Dario, 27, will be appearing in court on Wednesday, January 7.

The spaniard, thought to have met his partner while she lived in the UK, was taken into police custody after receiving hospital treatment for wounds which are thought to be self-inflicted.

Local reports claim Monica and Ruben Dario were in the process of separating despite the fact they were still living under the same roof.

Police made the arrest after being called to the double murder scene early yesterday morning.

The regional Mossos d’Esquadra police force said: “Police have arrested a Spanish man aged 27 as the suspected author of a double homicide.

“We received a call alerting us to the fact a man had allegedly killed his 28-year-old partner and young daughter around 6.10am yesterday on Monday, at their home in Esplugues de Llobregat.

“Police and other emergency services went to the scene and confirmed the death of two people.

“The suspected author was arrested.”

Easyjet, who employed Monica as a member of their ground crew staff, said the company had been in touch with Monica’s family to offer support and assistance at this difficult time.

“Everyone at easyJet is extremely saddened by this and our thoughts are with the family and friends of our colleague,” said the airline in a statement.

Esplugues de Llobregat’s town hall responded to the news of the horrific crime by organising three days of mourning.

Its mayoress Pilar Diaz, said she was “devastated” at what had happened.

“Today we have woken up to the worst news,” said the mayoress in a tweet.

“Monica and her daughter’s lives have been snuffed out in Esplugues. Our thoughts are with their family.”

He said: “Terrible. A man has allegedly murdered his [partner] and a three-year-old daughter in Esplugues de Llobregat.

“All my love for your family and friends. No one will prevent us from continuing to fight against the #malechauvinist violence.”