Maldives Marine Artwork Destroyed for Being a ‘Threat to Islamic Unity’

A new sculptural work, Coralarium, created by artist and environmentalist Jason deCaires Taylor, was demolished last week after it was deemed anti-Islamic. The semi-submerged artwork was criticised by religious leaders and scholars in the Maldives, where Islam is the official religion. The depiction of human figures in art is discouraged under Islamic law.

The government ordered the destruction of the artwork, after a court ruled it to be a threat to “Islamic unity and the peace and interests of the Maldivian state”, the Maldives Independent reported, despite the authorities previously granting permission.

The project by DeCaires Taylor, who is known for his underwater sculptures and galleries around the world, was commissioned by the Fairmont Maldives Sirru Fen Fushi resort, owned by the Accor hotel group, as an “intertidal gallery”, and was completed in July. The large steel frame with cutouts aiming to mimic the marine world was intended to allow sea life to explore freely within, acting as a new habitat for coral and other species. Thirty human figures were positioned on top and inside the frame at tidal level, with others submerged beneath. The sculptures were based on life-casts of people, around half of them Maldivian, with some reimagined as hybrid forms including coral or root-like elements. 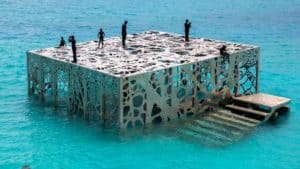 Nine months in the making, its creation involved a large team of marine engineers, steel fabricators, divers and mould-makers. Specialist materials included pH-neutral steel, which is safe for use in a marine environment. Changing according to light and tides, the artwork was open to resort guests and day visitors.

However, on 21 September the work was destroyed under court order with pickaxes, saws and ropes.

“On Friday last week I was extremely shocked and heartbroken to learn that my sculptures have been destroyed by the Maldivian authorities at the Coralarium, despite continued consultations and dialogue,” deCaires Taylor said. “The Coralarium was conceived to connect humans to the environment and a nurturing space for marine life to thrive. Nothing else! The Maldives is still beautiful, with a warm and friendly population, but it was a sad day for art and a sad day for the environment.”

Soon after it was installed, a statement was released by the president’s office, stating that “due to significant public sentiment against the installation”, the ministry of tourism would facilitate the removal of the sculptures. Although the English statement describes the work as “sculptures”, the Maldivian uses the word “budhu”, which means idol, the worship of which is considered a sin in Islam.

The discussion spread across social media and into pre-election speeches of politicians last week. The outgoing president, Abdulla Yameen of the Progressive Party of Maldives (PPM), had come under fire during his time in office for not removing the artwork quickly enough, including from president-elect Ibrahim Mohamed Solih of the Democratic Party. The destruction of the artwork occurred only days before the general election, which saw Yemeen losing out to Solih on 23 September. In the run-up to the election the PPM manifesto had outlined the establishment of “Artists’ Hubs in key tourist areas”.

In the days leading up to the election, Solih, speaking to the Maldives Independent, said: “We have a need to define what idols are. Religious scholars or the fatwa council must deliberate on this and specify what things can be labeled as idols. Some people on social media are even saying if these are idols, then mannequins are idols, too.”

In a statement to the Guardian, the Accor hotel group said: “While we are very surprised by the removal of eco-art pieces by the authorities, we respect the people, traditions and customs of the Maldives. The removal process was peaceful and friendly without interruption to our world famous service. The Coralarium structure and underwater trees remains intact, ensuring the coral restoration programme remains alive and well. We have initiated immediate reimagination plans with the artist, creating a new underwater gallery that will be in harmony with the locals and environment.”