Apu ‘To Be Dropped’ from The Simpsons After Racism Row

After 31 years working behind the counter of Springfield’s Kwik-E-Mart, Indian shopkeeper Apu is going to be dropped from The Simpsons, sources close to the programme have claimed.

The cartoon character, voiced by white actor Hank Azaria, prompted heated debate in recent months after he was branded a racist caricature in a TV documentary, The Problem with Apu.

The documentary’s presenter, US comedian Hari Kondabolu, claims the character is tainted “a little bit of the poison of racism”.

Rather than calling for the character to be killed off, however, he urged the writers to “keep him” and “complicate” him, to make him less of a stereotype.

But now insiders are saying that Apu will instead be written out of the show following the racism row.

Adi Shankar, the film producer best known for the 2011 Liam Neeson thriller The Grey, has claimed “multiple sources” have confirmed the shopkeeper’s fate is sealed.

“They aren’t going to make a big deal out of it, or anything like that, but they’ll drop him altogether just to avoid the controversy.” It would be a radical move for America’s longest-running sitcom.

Apu has been a fixture on the show since 1990, and Azaria won a 1998 Emmy Award for his portrayal of the character.

The Simpsons’ production company, Gracie Films, did not respond to a request for comment. 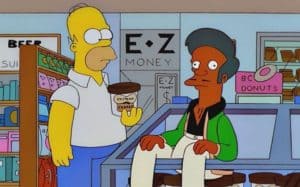 Gregory Hood has an excellent analysis of the Apu flap here.