The Dangers of Ignoring Cognitive Inequality

IQ scores are classified in a number of ways, all of which are broadly similar. The Wechsler Adult Intelligence Scale (WAIS-IV) establishes seven categories of IQ scores. Most of us fall into the ‘Average’ band, constituted by the 90-109 range. Those achieving scores of 130 or higher are considered ‘Very Superior.’ Conversely, scores of 69 and under are classified as ‘Extremely Low,’ and automatically qualify the scorer for a diagnosis of ‘mild retardation’ according to the APA’s Diagnostic and Statistical Manual of Mental Disorders. {snip}

The connection between intelligence and behavioral problems, such as Conduct Disorder (CD) or Antisocial Personality Disorder (APD), was well-known around the time of the Port Arthur Massacre. A review by biostatistician and UCSD professor Sonia Jain cites contemporaneous studies to suggest that low IQ scores in childhood should be considered a risk factor for APD and CD. In 2010, several psychologists published results from a longitudinal study containing data on over a million Swedish men, who were tracked from conscription for a little over 20 years. They found that IQ scores tested during conscription were a significant and robust predictor, not only for APD or CD, but for all categories of mental disorders. Conscripts with low IQ were substantially more likely to be diagnosed with one or more mental disorders, to suffer from mood and personality disorders, and to be hospitalized for mental illness. {snip} 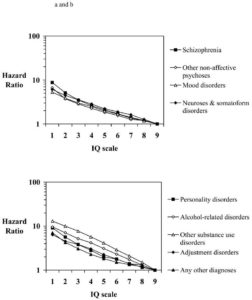 a & b: Hazard ratios for admission for different categories of psychiatric disorder according to nine-point IQ scale. Highest IQ score (coded as 9) is the reference group. Estimates are adjusted for age at conscription, birth year, conscription testing centre, parental age and parental socioconomic status. (n=1,049,663)

{snip} In a population where intelligence is normally distributed with a mean of 100, {snip} 15 percent would receive IQ scores somewhere below 84 — well beyond the threshold for disqualification in the Armed Forces Qualification Test (AFQT), used to determine suitability for admission into the US Army until 1980. Careers for those below this level are extremely rare — a fact that might help explain the correlation between low IQ and an enhanced risk of criminal offending, given the scarcity of well-paid jobs for those with an IQ of below 84.

But much of this correlation is due to street-level petty and violent offenses, not mass murder, and it would be abhorrent — obscene, even — to suggest that people with a low IQ should be treated with suspicion, or as murderers-in-waiting. In almost all cases, these individuals pose a risk to no one but themselves, and are more likely to fall prey to victimization by others. On the other hand, it is equally irresponsible to ignore the specific difficulties which those with a low IQ face. The consequences of this wishful thinking — however noble in intent — can be devastating.

Perhaps the best example is offered by the recent history of the Cold War. While the American military-industrial complex was sufficiently sophisticated to provide the United States with all the arms and armaments it could possibly hope for, there are always things that money cannot buy. In this case, it was bodies — young American men needed to fight on the ground in 1960s-era Vietnam, where they found the most unforgiving of battlefields among the region’s unassuming jungles and innocuous rice paddies. The unusually high attrition rate of soldiers posted there, as well as the frequent use of student deferments or feigned illness to dodge the draft (President Trump’s excuse of ‘temporary bone spurs’ constitutes one particularly famous example), resulted in a shortage of men which meant that more troops were needed than the nation was able to supply.

{snip} Secretary of Defense Robert McNamara arrived at a more permanent workaround. The US government would draft men whose low IQ scores had hitherto disqualified them from military service. This stratagem — codenamed ‘Project 100,000’ — is detailed along with its dreadful consequences in the book McNamara’s Folly by the late Hamilton Gregory. Gregory witnessed the fate of the low-IQ draftees firsthand while he was a soldier in Vietnam. These draftees — cruelly nicknamed ‘McNamara’s Morons’ — were generally capable of completing simple tasks, but even a simple task imperfectly executed can be disastrous in warfare.

What happened to many of the 100,000 (whose actual total exceeded 350,000) is not hard to predict. “To survive in combat you had to be smart,” Gregory writes. “You had to know how to use your rifle effectively and keep it clean and operable, how to navigate through jungles and rice paddies without alerting the enemy, and how to communicate and cooperate with other members of your team.” Fulfilling all or any one of these minimum requirements for survival in a battlefield is contingent upon a certain level of verbal and visuospatial intelligence, which many of McNamara’s draftees did not possess. This ultimately led to their fatality rate in Vietnam exceeding that of other GIs by a factor of three.

The danger of physical harm faced by those with a low IQ is not restricted to the battlefield. A 2016 study by four psychologists using data from the Danish Conscription Database (containing 728,160 men) revealed low IQ to be a risk factor for almost all causes of death. A drop in IQ by a single standard deviation (roughly 15 points) was associated with a 28 percent increase in mortality risk. The association between low IQ and mortality was particularly great for homicide and respiratory disease (such as lung cancer). The high homicide rate could reflect a predisposition for those of low IQ to find themselves in dangerous situations, perhaps due to a lack of economic opportunity or an increased likelihood of being victimized by predatory individuals. Similar features could explain the prevalence of respiratory disease, which may be a product of high rates of smoking as well as a greater likelihood of inhabiting more polluted industrial areas where it’s easier to find low-skilled work. Clearly, being born with a low IQ is sufficient to set one up for an unlucky and unhappy life. {snip}

{snip} Having intelligence is what allows us to operate in the world — both on our own, and within the societies we inhabit. Those lucky enough to have a high IQ have an easier time at dispatching the various challenges they face, and thus naturally rise within hierarchies of competence. We can imagine any number of these hierarchies, most of which are unimportant (the hierarchy of Rubik’s Cube solvency speed, for example, is probably irrelevant), but all of which require some degree of intelligence. Furthermore, some of these areas of success — such as friendship groups, romantic relationships, and professional employment — are so fundamental to the individual pursuit of happiness that to be unable to progress in them is profoundly damaging to one’s sense of well-being and intrinsic self-worth.

This means that having a low IQ doesn’t only make you more likely to get killed or fall victim to an accident. It also means you’re more likely to undergo difficulties in progressing up every ladder in life. You’ll often feel permanently ‘stuck at zero’ — unable to improve or change your position. Most of us will experience this feeling at least a few times in our lives, whether encountered in school (being unable to break the ‘A-grade’), in our social lives (being unable to establish or maintain a successful romantic relationship), or in comparatively trivial areas. Yet most of the time, it is transient — passing when we switch our efforts to a new endeavor, or after devising a way to solve the problem. Very few of us know what it is like to have that feeling almost all of the time — to have a large proportion of one’s attempts at self-betterment or advancement frustrated by forces that seem to be beyond our control. Being trapped in such a dismal psychological state for only a brief interval can lead to anxiety, depression, or dependence. In some, this feeling of ‘being stuck at zero’ (that the world is manifestly unfair and against them) will lead to resentment — and resentment can turn into murderousness.

None of this is to suggest that those with low IQ, or those who experience a duration of being ‘stuck’ due to their cognitive limitations, should be viewed as likely to break the law or engage in violent crime. But it’s one possible explanation for the fact that those with a low IQ are more likely to do so than those with an average or high IQ. And the uncomfortable reality is that the resentful, in this case, are somewhat correct in their analysis — they have been set up in a game rigged against them from the very start. Recent research in genomics has confirmed this: a 2018 study in Nature1 used genes sequenced from over a million individuals to examine the genetic contributions to educational attainment. This process allows for the construction of profiles for individual ability by evaluating polygenic scores (PGS). In this study, those within the highest PGS quintile had around a 50 percent likelihood of graduating from college; those in the lowest bracket, only 10 percent. Yet none of this difference in ‘genetic quality’ can be accounted for by individual merit or achievement. It is a difference of crucial importance, yet it is determined for us as individuals by luck alone. Polygenic Scores from the Nature study (2018)

While generous welfare systems in Western countries do provide benefits to those most disadvantaged by the cognitive lottery, a much larger proportion do not qualify for any assistance at all. Instead, those with IQs below 84 are often forced to work arduous manual labor jobs, since they are unlikely to possess the array of qualifications required for non-manual work. These occupations make them the most marginalized in our complex capitalist society — and even those employment opportunities are shrinking under the unrelenting pressure for lower costs and greater efficiency. Job categories like driver, cleaner, and assembly line worker are rapidly disappearing due to automation, leaving those with low IQ nowhere else to go. While most of us delight at the luxurious comforts heralded by the ongoing automation revolution, these same comforts — such as self-driving cars, autonomous vacuum cleaners, and robotized assembly lines — are poised to render a cognitively vulnerable 15 percent of the population unemployed and unemployable.

What exactly are we doing to rectify or alleviate cognitive inequality? The answer, of course, is that we ignore it and hope it will go away. Continuing to force large numbers of cognitively underprivileged children through the arduous challenges of the standard education system is only perpetuating the devastating legacy of intelligence denialism. {snip}

{snip} Until we accept that people with low IQ exist, and that the ramifications of their condition are indeed severe, how can we even begin to discuss what might be done to alleviate their suffering? The importance of cognitive ability for life success in our technologically complex society makes answering that question a moral imperative — but economic and political leaders have shown scant interest in this issue. Despite the fact that low IQ is correlated with negative outcomes in a large number of areas and afflicts around 15 percent of the population, we seem incapable of treating it like any other public health problem.

Wael Taji is the penname of a predoctoral student and intelligence researcher working in behavioral economics and neuroscience at Peking University. His first publication, “China’s Urban-Rural Cognitive Divide: Evidence from a Longitudinal Cohort Study,” is currently under review at the journal Intelligence, published by Elsevier. You can follow him on Twitter @coevolutionist