A Houston cop was caught on camera begging a security guard to help him arrest a resisting suspect — but she stood by and recorded him instead.

The officer was tackling Davon Shavelle Miller, 17, at a gas station when he spotted a security guard nearby and begged for assistance.

‘Help me!’ the unidentified officer can be heard saying in the video, which has since been posted on Facebook and viewed more than 700,000 times. 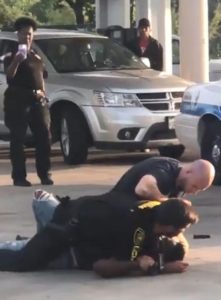 Authorities said Miller was initially pulled over because he was driving a car connected to an aggravated robbery and shooting, according to KPRC.

Miller got out of the car and tried to flee as the officer seen in the video chased after him.

The officer tackled Miller to the ground at a gas station and can be seen lying on top of him in the beginning of the clip.

Footage shows an unidentified bystander trying to help the officer control Miller as the teen continues to resist.

A woman in green scrubs is nearby, repeatedly begging Miller to ‘stop resisting!’

‘Hey! Hey! It’s not worth your life,’ she screams at the teen. ‘Stop resisting!’

‘He’s trying to kill me!’ Miller yells back as he continues to squirm under the cop’s body.

Miller then appears to put his hand to the cop’s face, trying to shove him away, as he screams ‘Why you push me!?’

The officer then appears to punch him in the head and says ‘Don’t grab my face!’

At this point a woman dressed in a security guard uniform exits a car parked behind the officer’s vehicle and holds up her phone to record the fight.

Miller then grabs the officer’s handcuffs, and the cop warns him that he will use his Taser if the teen doesn’t let go.

‘No he’s not!’ the woman in the scrubs screams as she continues to plead with the teen. ‘He’s not going to kill you, we’re all out here with cameras.’

The bystander manages to rip the handcuffs away from Miller as the security guard continues to record the incident. The officer then turns his head and notices her.

But the situation escalates when Miller appears to grab the officer’s gun.

‘Stop grabbing my gun!’ the cop screams as the woman in the scrubs yells ‘Oh my god!’ in fear of what will happen next.

‘I didn’t grab his gun!’ Miller yells back.

The officer holds both of Miller’s hands down to the ground and turns to the security guard, who has moved from her original position and begun circling them.

Miller was arrested following the incident and charged with felony disarming a police officer for attempting to take the officer’s gun.

Joe Gamaldi, president of the Houston Police Officers’ Union, said the teen was ‘absolutely a threat’.

‘He had a pistol in his car that his girlfriend actually wrapped in a towel and threw it in the bushes while our officer [was] fighting with him,’ Gamaldi said.

‘Not only that — you watch the video. He’s grabbing our officer’s gun.’

It remains unclear if the woman was an actual security guard, and where she was employed.

But Gamaldi said, no matter who she is, she should be fired immediately.

‘So-called security guard, a complete joke,’ he said. ‘She should be ashamed of herself.’