Several reports indicate that the fragments of the “migrant caravan” are now arriving south of the U.S. border with Mexico. Border Patrol officials in California and Arizona said they have not seen any illegal border crossings between ports of entry this week.

Over the weekend, about 600 migrants arrived via train in the northern Mexican city of Hermosillo, the Associated Press reported on Tuesday. The group plans to continue to Tijuana in the next few days. 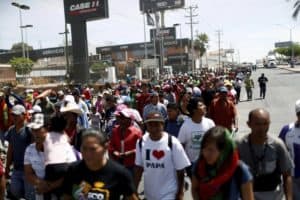 Late last week, about 50 migrants from Central America arrived in Tijuana, Reuters reported. “Since peaking at around 1,500 people, the so-called migrant ‘caravan’ has dwindled under pressure from Trump and Mexican migration authorities, who vowed to separate those migrants with a right to stay in Mexico from those who did not,” Reuters states. {snip}

Border Patrol officials in the San Diego, Yuma, and Tucson Sectors told Breitbart Texas on Tuesday they have seen no illegal crossings in recent days by anyone from the “caravan.” El Centro Sector has not yet responded to an inquiry.

On April 11, Breitbart Texas reported that an MS-13 member joined up with a “caravan” splinter and crossed the border in the Yuma Sector.

U.S. Customs and Border Protection Officials have not responded to an inquiry as to whether they received any asylum requests from “caravan migrants” crossing from Tijuana in recent days.

If members of the ‘caravan’ enter the country illegally, they will be referred for prosecution for illegal entry in accordance with existing law. For those seeking asylum, all individuals may be detained while their claims are adjudicated efficiently and expeditiously, and those found not to have a claim will be promptly removed from the United States.

In response to the caravan and recent spikes in illegal border crossings into the U.S., President Trump ordered the deployment of up to 4,o00 National Guard troops to help secure the border.

The governors of Texas, New Mexico, Arizona, and California all responded by activating troops in their respective states.