For someone who understands the reality of race and IQ, Bell Curve co-author Charles Murray has been surprisingly quiet about immigration. In June, Dr. Murray couldn’t recall a time when he had taken a public stance on the issue:

To the many who complain about my stance on immigration: Cite article or book/ page in which I state a position on immigration. I’ll post.

Dr. Murray did, however, argue in The Bell Curve that immigration from low-IQ countries has a dysgenic effect and makes the American labor force less competitive. A Twitter user also pointed out that a decade ago, he commented on immigration after being prompted by John Derbyshire. Dr. Murray said he wanted an end to illegal immigration, family reunification, and birthright citizenship. He was in favor of high-skilled immigration but skeptical of unlimited low-skilled immigration. However, he also said he was “not impressed by worries about losing America’s Anglo-European identity” and claimed he’d “rather live in a Little Vietnam or a Little Guatemala neighborhood, even if I couldn’t read the store signs, than in many white-bread communities I can think of.”

At a Center for Immigration Studies panel discussion on Monday with independent researcher Jason Richwine and University of Pennsylvania law professor Amy Wax, Dr. Murray said his views on the subject haven’t evolved much, but that one thing has: The Trump phenomenon has led Dr. Murray to take seriously low-skilled Americans’ objections to low-skilled immigration. He now thinks it was a mistake not to have thought or written about this before. He made it clear that this change wasn’t inspired by Mr. Trump himself, but rather by the intense support he draws from working-class Americans. The subject of the panel discussion, a new study by Dr. Richwine called “Immigrants Replace Low-Skill Natives in the Workforce,” offered clues to the basis of that support.

Looking specifically at non-incarcerated men of “prime-age”–between 25 and 54–without a high school degree, Dr. Richwine found 35 percent of native-born Americans were neither working nor looking for work in 2015, compared to only 8 percent for similarly situated  immigrants. When considering both the employed and the unemployed, on average, natives worked the equivalent of 35 full-time weeks, compared to 49 weeks for their immigrant counterparts. Among natives, the problem is particularly bad for this class of blacks, who work an average of only 24 weeks, compared to 36 weeks for whites and 42 weeks for Hispanics.

The work-time gap between this class of natives and immigrants–men ages 25 to 54 who didn’t finish high school–has grown more dramatic since the recession, from which natives still haven’t recovered: 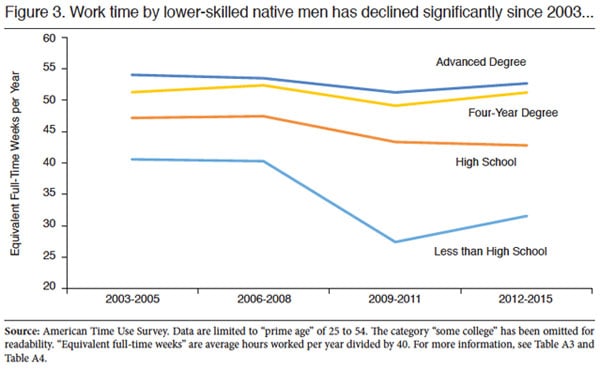 Though high school dropouts make up only 7 percent of prime-age, native-born men, they account for 19 percent of the prime-age, native-born men outside the work force. Dr. Richwine concludes that low-skilled immigration makes this group’s high unemployment less noticeable. Their absence from the workforce does not cause labor shortages because immigrants fill the gaps. Politicians and business leaders therefore have no real incentive to get natives back to work. Dr. Richwine argues that restricting low-skilled immigration would focus attention on the plight of natives while also increasing competition for jobs and raising wages.

The panel also discussed the increasing defects of the American lower class, something highlighted in Dr. Murray’s 2012 book Coming Apart. While this is related to unemployment, it’s unclear which comes first. In her comments, Prof. Wax said that whereas progressives often blame unemployment of the low-skilled on structural factors such as corporate greed, globalism, and outsourced manufacturing jobs, employers may simply prefer immigrants–and not just because they’re willing to work for lower wages. She pointed to rising obesity, single parenthood, and drug use among the native lower class as possible explanations. She also blamed cultural attitudes: More Americans say a low-skilled job is a “dead-end” or think society owes them a living.

Dr. Murray agreed with Dr. Richwine and Prof. Wax, and said the only way to know whether unemployment and attitudes among the low-skilled Americans might be improved is to follow Dr. Richwine’s prescription. This experiment must be tried, Dr. Murray explained, if we are to preserve the relative class egalitarianism that has characterized the country. He said Trump’s popularity has encouraged him to think in terms of “what’s good for us,” and part of that is looking after our own unemployed. “We need to reconstruct an American society in which people are proud of being part of the same brotherhood/sisterhood,” he explained.

No matter how fervently he wants to restore American brotherhood, Dr. Murray isn’t willing to vote for Donald Trump to get it. “If you desire the ends, you should desire the means,” one questioner noted. Dr. Murray said he would not vote for Mr. Trump even if he adopted all the principles of Friedrich Hayek and Milton Friedman, arguing that “it is possible to have a temperament and a character which makes you unfit to hold the office of president.” He does, however, consider limiting low-skilled immigration “an idea whose time has come” and thinks Democrats will sense this sea change and enact restrictions even if Hillary Clinton wins.

Despite his newfound nationalist sentiment, Dr. Murray remains the sort of “conservative” willing to sacrifice victory for the sake of respectability. Still, he is one of the few establishment intellectuals with the courage to follow the data on race and IQ. At the end Monday’s event, Dr. Murray said he plans to elaborate on Robert Putnam’s findings that diversity destroys social trust. This is a promising area of investigation; let us hope Dr. Murray finds his courage once more.