One last dip into a big Pew survey we’ve been discussing on the politics and policy views of Americans. Pew surveyed more than 10,000 adults earlier this year on topics ranging from their views of Hillary Rodham Clinton to taking the bus, and the report divides their responses along a set of political typologies that group respondents into generally coherent categories across the range of policy issues: i.e., the “business conservative,” the “solid liberal,” the young “next generation left.”

Across that spectrum, there is not surprisingly wide disagreement on racial progress in America and the steps government still must take to achieve it. Most of the results on this chart are fairly predictable: Conservatives broadly believe that the government has pretty much done all it needs to to ensure equal rights for blacks. Liberals, with one striking exception, overwhelmingly disagree: The views of young, affluent liberals stand out. In fact, they align more closely with conservatives than other liberal groups. {snip}

We know that the “next generation left” does support affirmative action (as do, notably, majorities of every typology other than the two most conservative): 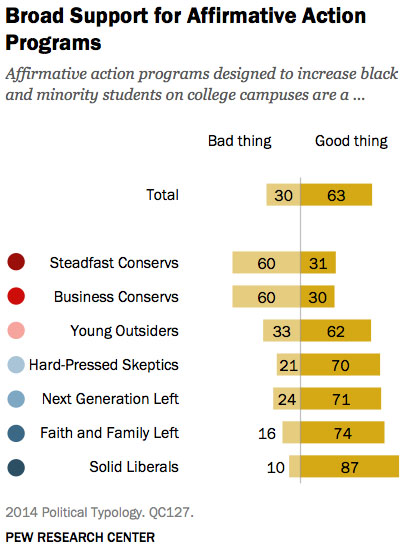 It’s possible, though, that young liberals support affirmative action more as a means to create diversity than to redress discrimination. In this next chart, 68 percent of the “next generation left” believe that blacks themselves–and not discrimination–are mostly responsible for their own failure to get ahead: The vast gap between solid liberals and steadfast conservatives on this question is striking (these results also provide context to the widely divergent and passionate responses to Ta-Nehisi Coates’ Atlantic cover story this spring making the case for reparations). But so too is the gap striking between solid liberals–a group that’s highly educated, urban and well-off–and their younger “next generation” counterparts.