Lego has been accused of racism by the Turkish community over a Star Wars toy allegedly depicting  a mosque.

The critics claim that the Jabba’s Palace model, part of Lego’s Star Wars range, offends Muslims as it resembles the Hagia Sophia mosque in Istanbul – one of the world’s most renowned mosques. 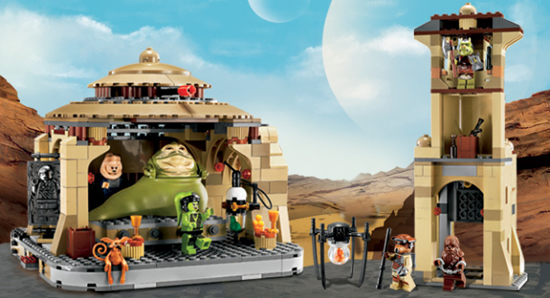 Members of the Turkish Cultural Community of Austria group also accused the toy manufacturer of depicting Asians as having ‘deceitful and criminal personalities’.

The group has released a statement calling for an apology from Lego for its cultural insensitivity.

The Lego set is based on the home of Jabba the Hutt, a central character in the Star Wars series, who lives in a domed palace, with a separated watchtower.

As well as bearing a likeness to the Hagia Sophia mosque, the Turkish group also claimed the toy takes its design from the Jami al-Kabir mosque in Beirut – while the watchtower is said to resemble a minaret.

A post on the community’s website contains a picture of the slug-like creature’s Lego home, pointing out similarities with the Istanbul mosque.

Outraged Muslims have criticised the toy producer on the community’s website, accusing it of deliberately placing contextual errors in the toy.

The case came to light when a Turkish man expressed his dissatisfaction with the toy after it was purchased for his son by a family member.

After investigating, Dr Melissa Günes, General Secretary of the Turkish Cultural Community, said that Lego had been contacted with an official complaint.

A statement posted on the organisation’s website refers to Jabba the Hutt as a ‘terrorist’ and says that he ‘likes to smoke hookah and have his victims killed’.

It adds: ‘It is clear that the ugly figure of Jabba and the whole scene smacks of racial prejudice and vulgar insinuations against Asians and Orientals as people with deceitful and criminal personalities.’

The statement says that the figures in the set are made to resemble ‘terrorists, criminals and murderers’.

Referring to weapons contained in the set, the statement suggests that the ‘combination of temple building and bunker facilities where shots are fired cannot be appropriate for children between 9 and 14 years old’.

It concludes: ‘One would expect more empathy and responsibility from a manufacturer of toys that has produced toys and models that are good for teaching for decades.’

The organisation also says it is planning legal action in Austria, Germany and Turkey against the toy firm if it does not get a satisfactory response.

‘The Lego mini-figures are all modelled on characters from the movie.

‘We regret that the product has caused the members of the Turkish cultural community to come to a wrong interpretation, but point out that when designing the product only the fictional content of the Star Wars saga were referred to.’