Is There a Doctor (of Genetics) in the House?

What are TV commercials really selling? Lately, American advertising has abandoned its mission of marketing products with clever presentations and jingles. Instead, ads seem to be promoting interracial relationships to the point that the product is often obscured. This is so common that commercials featuring whites exclusively are rare.

While many race combinations are featured, the preferred pairing seems to be a black male with a white female. Modeling agencies can even provide mixed-race children to complete the picture of familial harmony. The images are shallow — one might say skin deep — but insidious when you consider the consequences of indiscriminate genetic mashups. 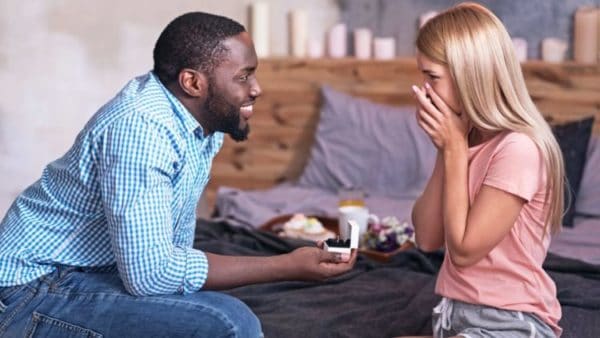 An ad for State Farm insurance.

Sickle Cell Anemia is a genetic disease. One in 12 American blacks carry the recessive Sickle Cell gene. It may be inherited from one parent and can remain quiescent for generations until a carrier mates with another carrier. In my experience, a discussion about Sickle Cell with blacks quickly ends in an accusation of racism. Apparently, you can quarrel with chromosomes.

Testing for Sickle Cell is responsible family planning. This would be like disease-management practices common among Jews, especially Ashkenazim, who are genetically predisposed to serious diseases such as Tay-Sachs (one in 27 Jews is a carrier) Canavan disease, Torsion dystonia.

Thalassemia is an inherited blood disease common in people from Mediterranean and Middle Eastern countries. In severe cases it causes anemia and is treated with frequent blood transfusions. Cousin marriage increases the risk. People from Southeast Asia, India, China, the Philippines, and elsewhere have high rates of Thalassemia. Haemochromatosis, the so-called “Celtic disease” predominantly affects the Irish and the British.

How many biracial couples, swept along by hormones in a sex-obsessed society, pause to consider the legacy they may be leaving their children and grandchildren? Occasionally, one hears that race-mixing will create a class of “golden people” who will bring about world peace. Instead, it can result in children with complex, individualized health problems that can’t be treated with conventional medicine. Introducing race-specific diseases into populations where they don’t usually occur is just part of the damage the advertising industry is promoting. The hodgepodge of DNA that kumbaya couplings can produce can be a death sentence, as was the case with Michelle Carew. Her father, baseball legend Rod Carew, was a Panamanian with black and West Indian ancestry. Her mother was a Russian Jew. Michelle had leukemia. A bone marrow transplant might have saved her life, but a donor match for her rare genetic composition could not be found. She died at age 18.

On a 2017 episode of the TV show Autopsy, forensic pathologist, Michael Hunter, examined the death of Bob Marley. The biracial Jamaican musician’s death at age 36 produced theories that Marley had been assassinated. Dr. Hunter’s conclusion was that the cancer, which took Marley’s life, is an exceedingly rare form usually restricted to whites. His father had it.

My own interest in this began years ago with a Facebook post featuring the face of a beautiful 10-year-old boy. His parents, a German father and a Japanese mother, had exhausted their resources and were desperately searching the world for a bone-marrow donor match. Were they successful? There were no follow-ups, which suggests a sad outcome. The consequences of indiscriminate ethnic/race pairings can be disastrous for children and families. Why isn’t this information widely disseminated?

At one time, blood tests were required for marriage licenses to screen for venereal diseases, rubella, and Rh-negative blood type. Screening might also have included Sickle Cell and Tay-Sachs. Unfortunately, in 2019, premarital blood screening was stopped because it was not thought to be a cost-effective way to screen for disease. Syphilis, the most serious disease screened for (and highly harmful to fetuses) was declining when screening was discontinued, but has reemerged as a public health concern. It is safe to assume that the Civil Rights movement and the 1967 US Supreme Court case, Loving vs Virginia, which overturned anti-miscegenation laws, softened the attitude toward blood testing. Mary Hughes, 68, and husband Millard, 81, inside their Homewood, Illinois home on March 8, 2007. The Hughes were married in 1965, before the landmark case of Loving v. Virginia, which declared bans against interracial marriage unconstitutional. (Credit Image: © Candice C. Cusic / TNS / ZUMAPRESS.com)

Increasingly, American society seems to lurch from one crisis to another despite millions of dollars spent on agencies that are supposed to mitigate crises. America is emerging from a year-long Covid-19 lockdown that has shined an uncomfortable light on national organizations that are supposed to protect our health. There has clearly been mismanagement, and there may have been corruption, politics, and hidden agendas.

What is the likelihood that the Centers for Disease Control (CDC), National Institutes of Health (NIH), or World Health Organization (WHO) are now studying the consequences of mixing different genetic groups? The claim that all people are created equal doesn’t hold up in the hospital room. Nevertheless, the country is well on its way to government by hurt feelings, denial of facts, racial extortion, and cans kicked down the road.

Would the mixed-race gene pool ever become a calamity that demands attention from an ill-prepared medical community? On the micro level, it already has. Witness the fates of the German-Japanese child and Michelle Carew. What about a macro-level calamity? Would a population of recessive-gene-carriers become so widespread that human vitality is compromised? The future should be bright with conquered diseases, healthful diets, and health-promoting practices. However, the current emphasis on “diversity, inclusion, and equity” (DIE) may lead to less healthy and even medically untreatable people. Americans are now a nation of short-sighted, dice-rollers. Some may say, “What is the likelihood my child will need a bone marrow transplant or an organ donation?” Or, “What is the chance my child, who is untested for recessive genes, will marry with another carrier?” Even the phrase family planning has a fuddy duddy ring and marriage is dominated by the belief that love is all that matters.

If there is no guidance from national organizations, who can step in to discuss this? Family doctors? Obstetricians? Gynecologists? Amniocentesis can reveal problems such as Sickle Cell or Tay-Sachs. Since both conditions are genetic, parents face a grim choice: abort, or give birth and try to manage the diseases.

What about premarital counseling from priests or pastors? Does that still exist? Are young people still open to advice from a counselor in a dog collar? Is the Church up to the task? Recently, Pope Francis reasserted the Catholic position on abortion. No mention of genetics as family planning. Most Protestant denominations, seeking to fill empty pews, avoid preaching specific guidance that might scare off congregants. Even the Jehovah’s Witnesses, whose strictures about blood prohibit donating blood or receiving transfusions, have taken no position on marriages that may result in serious, genetic blood disorders.

Into this abyss of ignorance comes the advertising industry. The influencers of Madison Avenue must know their power to shape attitudes. Why are they doing this? Do ad agencies think clients will get better a return on investment by turning Jake from State Farm into a black man? Who is their target audience for a black husband cooking and doing laundry for his beaming white wife? Coca-Cola trumpeted its “wokeness” when it said, “Be less white.” Much of advertising is following suit, but taunting whites by erasing them from the marketplace is not just bad business; it’s a provocation.

People can take action. We must name, shame, and boycott these advertisers. It is despicable to peddle laundry detergent by promoting white guilt and self-loathing. Cigarette advertising was driven from television because the product was harmful. Cigarette packages bear a Surgeon General’s warning. Advertising for liquor and beer is followed by “Drink responsibly.” BOTOX ads warn about side effects. Anything that encourages unions which can have dangerous genetic outcomes should have a similar warning.

But it won’t happen in woke advertising. Consumers must say, loudly and clearly, “We know what you’re selling. And we’re not buying it!”

View all posts by J.B. Clark