On June 13, I drove to Richmond, Virginia, to see the damage done to the Confederate monuments and pay my respects to the men whose statues still stand. I was too late for President of the Confederacy, Jefferson Davis. The mob tore him down on June 10, leaving this defaced memorial.  (Click on the  photos to see them at full resolution.) Here is a detail of the rioters’ artwork. Stonewall Jackson is still on his horse, but his pedestal has been updated. Here is Jeb Stuart. There is a gentle slope up from the street to the pedestal, and white skateboarders were doing tricks on it. The worst treatment — short of tearing it down — was reserved for the Robert E. Lee monument. The general is still astride Traveller, but the state of Virginia, which holds title to the monument is determined to take him down.

Monument Avenue is a majestic boulevard, lined with lovely houses. The people who live in them are overwhelmingly white, but many houses displayed “Black Lives Matter” signs. This mansion on what is still called (Jefferson) Davis Avenue, had a huge banner hanging from the balcony. 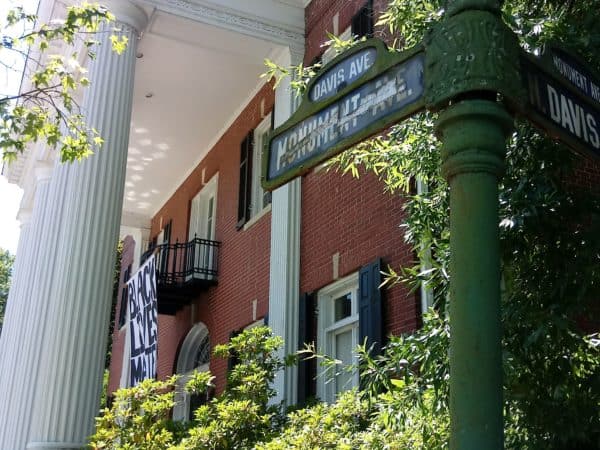 It had a smaller sign at a side entrance. Are these signs sincere expressions of capitulation or a cynical appeal to the mob: “Please don’t touch our lily-white Doric columns”? I fear it was the former. It was a beautiful day, and someone had hired a black gospel band to give a concert at the base of the Lee memorial. The crowd was almost entirely white, and the mood was festive. There was no menace in the air — but whites still proclaimed their emasculation. I visited the headquarters of the United Daughters of the Confederacy (UDC) just off Monument Avenue on what used to be called The Boulevard. Last year, it got a new name — Arthur Ashe Boulevard — to honor a black tennis player. The evening before the mob tore down Jefferson Davis, it broke out all the windows of the UDC building, and set a fire inside, destroying Stonewall Jackson’s battle flag and a collection of his papers. This is what the building looked like: Every window was smashed and boarded up — at least in Confederate gray. I hadn’t realized that the UDC headquarters was right next to the Virginia Museum of Fine Arts, also on what used to be known as The Boulevard. Last year, the museum added a new sculpture to its permanent collection, “Rumors of War,” by the black artist Kehinde Wiley. Mr. Wiley says he felt “terror” walking by the statue of Jeb Stuart (see above) so he did an anti-racist version with a black man in the same pose — but wearing sneakers and torn jeans. The horse faces the UDC building. The sculpture was, of course, untouched. I must have spoken to a dozen uniformed police officers who were discreetly minding the crowd around the Lee monument. I thanked them for their work, and assured them that many, many Americans are disgusted by the latest fashionable tag, ACAB (all cops are bastards). They were pleased. I asked why they didn’t save the Jeff Davis statue and hadn’t stopped the desecration of the other monuments. “We were told do hold back,” said one officer with disgust. “You could have burned every car in the city and we wouldn’t have done anything.”

I asked another officer if the force was having a hard time finding new officers. “Who wants to be cop in Richmond?” he asked. He said recruiters are scraping the barrel to the point that some police academy trainees are “MRs.” I asked what he meant by MR. “Mentally retarded,” he said.

I escaped to Richmond’s Hollywood Cemetery, which has been untouched by riots. Eighteen thousand Confederates are buried here; some were famous. This man led the ill-fated charge that bears his name. I hadn’t realized he had served in so many important crucial battles in the Mexican-American War. Jeb Stuart and his horse may come down from Monument Avenue, but here — at least for now — he rests in peace. Here is a memorial to unnamed Jewish Confederates who gave their lives for the South. “A glorious immortality.” “Furled but not forgotten.” And, of course, “Thus, always, to tyrants.” This was the most moving monument of all: a 90-foot granite pyramid marked simply: “To the Confederate Dead.” As I drove home I listened to the radio. A Richmond talk-show host was explaining on National Public Radio why the monuments had to come down. He said they were put up as expressions of white supremacy to keep blacks in their place. Of course. When the United Daughters of the Confederacy and the people of the South raised the money for these memorials it had nothing to do with love and admiration for the truly great men who fought so bravely and loyally for a nation that was strangled in its crib. It was to insult the Negroes. This is now the voice of Richmond.

Of all forms of capitulation, capitulation of the mind is most grievous and contemptible.