The first, written by Astead Herndon, was about St. Cloud, Minnesota, and its “white identity politics.” St. Cloud has taken in many East African refugees including many from Somalia. The city — current population 70,000 — was 2 percent non-white 30 years ago, but mostly due to refugees, it is now 18 percent non-white.

Residents want their representatives to stop the flow, but the New York Times calls them “anti-Muslim,” “xenophobic,” and “white, anti-immigration activists,” and dismisses fears of a “cultural threat.” Even though Mr. Herndon is writing about non-whites replacing whites, he calls “white replacement” a “racist conspiracy theory tied to the declining birthrates of white Americans.” The opening paragraph claims St. Cloud has had only a “few thousand” migrants, but the real figure is closer to 12,000.

Mr. Herndon mentions crime and notes a Somali migrant stabbed 10 people at a St. Cloud mall in 2016, but claims “there is no demonstrated link between immigrants and criminal behavior.” He also portrays concerned citizens as cranks: John Palmer, a retired university professor, gets a “daily intake of news from xenophobic and conspiratorial sites.” He gets the brushoff for suggesting the new migrants are less intelligent than native Americans. (Fact check: true.)

Another concerned citizen, Bob Carrillo, put a picture of his white grandchildren on the coffee table when Mr. Herndon interviewed him. The reporter claims that this is “meant to amplify the emotional impact of his xenophobic thesis: that Muslims pose an existential threat to the safety of his family.”

One person was punished for a sensible comment to The New York Times. Kim Crockett, vice president of the conservative Minnesota think-tank Center of the American Experiment, was quoted as saying, “I think of America, the great assimilator, as a rubber band, but with this — we’re at the breaking point . . . . These aren’t people coming from Norway, let’s put it that way. These people are very visible.” Her think-tank suspended her and forced her to apologize for stating the obvious.

A few days later, the Times covered African migrants coming to Portland, Maine, a city about the same size as St. Cloud. Unlike St. Cloud, most residents are said to be happy with the new arrivals. The Times claimed in the headline that Portland needs new people and that Africans are the answer. However, the subhead hints otherwise: “The surge has opened a debate in the city, which needs new residents but also has filled its shelters.”

The article says the Africans have swamped the city’s municipal fund and its homeless shelters, but reports happily that Mayor Ethan Strimling thinks African immigration will solve Portland’s population problem: “[W]hy would we want to stop that, especially when it costs us so little money?” Mayor Strimling said he was glad to hear it when President Trump said he might send detained illegals to sanctuary cities.

The only official worried about costs is city manager Jon Jennings. He says Portland is relying on outside donations to manage the influx and is running out of shelter space. He wants to cut the funding that attracts asylum seekers. Portland promotes itself as the one American city that offers welfare to migrants who don’t yet have asylum status (ordinarily they’re not eligible for welfare). This reckless policy leaves Portland short of cash for its own needs.

But the word is out on Portland’s open-handed policy, and foreigners keep coming; 250 showed up in just one week in June. The Times sees this as a temporary challenge that will ultimately benefit Portland, but the article says nothing about whether the newcomers work or are even looking for jobs.

Both articles paint a rosy picture of Africans; the problem is the natives. In Minnesota, it’s white xenophobes. In Maine, it’s a lack of funding. Both can be overcome if Americans commit to multiculturalism.

Aside from “diversity,” the Times never explains how Africans are a benefit. In fact, they are a disaster. USA Today named St. Cloud the worst Minnesota city in 2018. It has the highest poverty rate, highest unemployment rate, and a crime rate 63 percent higher than the national average.

More than half of St. Cloud’s blacks and nearly 42 percent of its foreign-born are poor. Retired Professor Palmer presented a report at a 2018 town hall meeting that showed Somalis have a higher rate of poverty, higher unemployment, lower median income, and a lower percentage looking for work than native Minnesotans. He argued the Somalis cause white flight, which explains why St. Cloud is the only Minnesota city with a declining population.

Somalis are a financial drain. Minnesota spent $81 million on refugees in 2015 alone, and many Somalis are also milking the system. The local Minneapolis Fox affiliate reported in 2018 that Somalis flew out of Minneapolis-St. Paul Airport in 2017 with an estimated $100 million in cash. Most of that was siphoned-off welfare and went to jihadi-controlled parts of Somalia. 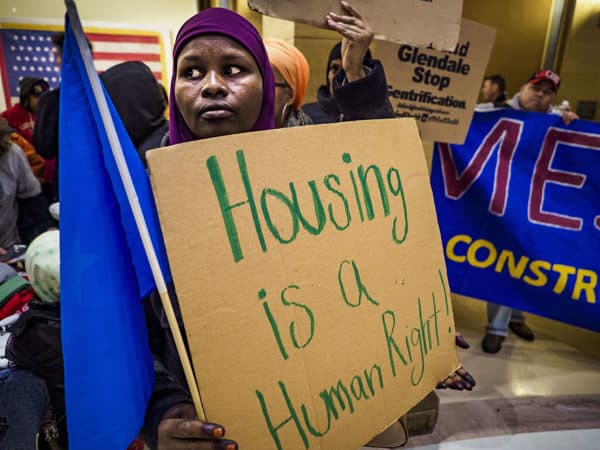 Somalis bring crime, which has spiked nearly 56 percent in Minnesota’s “Little Mogadishu” since 2014. Most homicides go unsolved because Somalis won’t talk to police, but Somalis still clamor for more police to protect them from gangs.

Somalis are at least a third of Minneapolis’ black population, and blacks were suspected perpetrators in 74 percent of violent crimes from 2009 to 2014. Under 19 percent of the state population is black. Nearly 70 Somalis — mostly from Minnesota — have joined or been caught trying to join an Islamist terror group, usually al-Shabaab, a Somali affiliate of al-Qaeda.

Maine has similar problems. Portland is begging for the rest of the state to cover the costs of housing hundreds of foreigners. Welfare for non-citizens costs the city $2 million a year, and Africans just keep coming. Maine’s House voted earlier this month to let non-citizens get food stamps and other welfare.

Former Maine governor Paul LePage said in 2017 that asylum seekers were the state’s “biggest problem” because they strain resources and deal drugs. Lewiston, Maine, was flooded with African migrants in the early 2000s because of its generous welfare. The town voted overwhelmingly for Donald Trump in 2016, and is worried it may have to take in Portland’s overflow.

For the liberals who write for the Times, it’s Americans who are the problem. Young Africans are the future and old white guys are the past. But any talk about “replacement” is a “racist conspiracy theory.”

Robert Hampton is a contributing editor at American Renaissance. He is a Middle American who chose to wake up.
< Cuccinelli Blames Migrant Father for His Own and Daughter’s Drowning Deaths
Are Cassandras Fated Only to Talk to the Wind? >
Blog
Commentary
Videos
Podcasts
Follow us