Jaden McNeil is a student at Kansas State University and the former chapter head of Turning Point USA. He left the organization after he decided it was useless. He started a new group called America First Students (@AmFirstStudents). 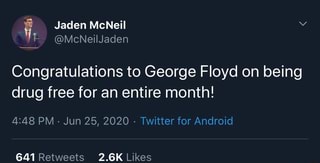 Since then, Kansas State University has had a mental breakdown. The school’s athletics department is struggling to contain a players’ rebellion. The school denounced him. It’s offering therapists for those who can’t handle this tweet. There are many violent threats against Mr. McNeil.

A message from President Richard Myers:

The insensitive comments posted by one K-State student hurts our entire community. These divisive statements do not represent for the values of our university. We condemn racism and bigotry in all its forms.

We are launching an immediate review of the university’s options. Black Lives Matter at Kansas State University and we will continue to fight for social justice.

Kansas State University is a public school. Unless the First Amendment no longer applies, it has no options.

I am united with all our #KState student-athletes for using their voices to stand up to racism and injustice. This disgusting comment is not representative of the K-State that I know and love. I strive to continue to work with our team on solutions and against all hate.

The Dean of Students:

For those impacted by this incident, please know there are supportive resources available including The Office of Student Life, Counseling Services, @KStateDiversity.

Recent tweets from a K-State student downplaying the Black Lives Matter effort and the tragic and senseless death of George Floyd are disgusting and totally inappropriate and not reflective of who we are as a University or our Athletic Department.

If this is typical of black athletes, we need a new concept of fragility. It’s a pathetic display of weakness from some of the most coddled people who have ever lived.
Mr. McNeil isn’t backing down.

“Coward” I’m one of the few people in this country willing to stand against the mob. The real cowards are people like you who bend over backwards to defend this shit in fear of being called racist or whatever. You’re pathetic. https://t.co/xRBC02BjFC

Kansas State, like almost every other American university, is a bloated institution with special groups set aside for non-whites.

It was also the scene of fake hate crimes in both 2017 and 2018.  Nothing happened to the hoaxers. Clearly, the supply of “hate” isn’t meeting the demand, if the university can’t handle a single vaguely edgy tweet.

If there is real hate, it is from those who are directly threatening Mr. McNeil’s life. Will the university act? The Kansas legislature should defund the school, beginning with the athletics department.
If it won’t, parents should stop sending their children to this poisonous place. They should stop supporting these teams. Stop going to games or watching people who hate you throw a ball. Better yet, stop living vicariously and lift, train, and compete on your own.

Mr. Hood is a staff writer for American Renaissance. He has been active in conservative groups in the US. You can follow him on Gab.
< White Evangelicals Love Black Lives Matter
Comments of the Week, June 27, 2020 >
Blog
Commentary
Videos
Podcasts
Follow us