What Do We Owe This Country? Part I

It clearly thinks it owes you nothing.

What allegiance do whites owe the United States? It was established as a country for whites, and honored them as founders and leaders. Today our own government treats us as an embarrassment and a problem. What does that mean for us? What does America now mean for us?

I’ll answer in two videos. This one shows how the United States has shifted — radically — from honoring whites to fearing and mistreating them.

There is nothing in the Constitution that says the country was built for whites, but in the very first sentence, it says the founders are building “a more perfect union” to “secure the blessings of liberty to ourselves and our posterity.” As the liberals never tire of pointing out, every one of the signers was white, so it would be logical to assume that the posterity they had in mind were white people. But the best proof what they had in mind was a nationality law that was passed during the first United States Congress, which met in 1790. Americans were passing the very first laws for a brand-new country, and this one was about a crucial question: Who could be an American? That was simple: only “free white persons.” There were bound to be snags because there were already other races in the United States, but blacks did not get citizenship until 1868. It took a civil war and the 14th Amendment, which became law only through force. Former confederate states rejected it but were denied representation in Congress until they ratified it. Indians didn’t become US citizens until 1924. Still, the country had an immigration policy that was designed to keep the country majority white, and that didn’t change until passage of a radical new law in 1965 that opened the country up the whole world. But you could call that illegitimate, too. Its backers promised there would be no change in the racial mix of the country, and if Congress had known the country would go from nearly 90 percent white to minority white in not even 80 years, it would never have voted for it. America was for white people, with perhaps a little non-white seasoning.

Census Director Robert Santos explained that “diversity and inclusion can serve as a catalyst for achieving excellence.”

However, not even Joe Biden is sufficiently committed to “achieving excellence” through diversity. And that is why Senator Tammy Duckworth of Illinois declared last year that she would vote to confirm Biden nominees only if they were “racial minorities” or LGBTQ. 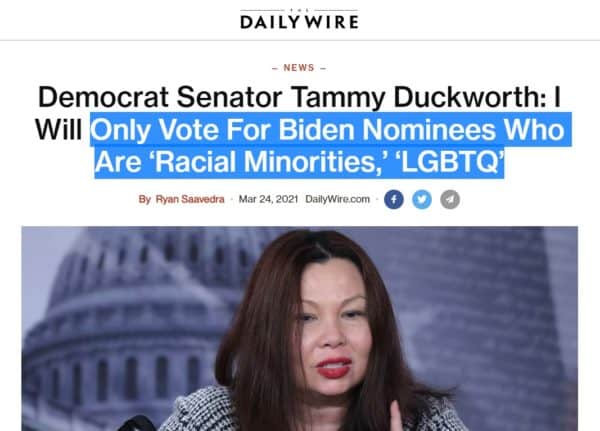 Both are Asian, and were disgusted with Democrat President Joe Biden’s appointments, whom you can see here.

The country is trying to do better. It used to celebrate Lincoln’s birthday and Washington’s birthday as national holidays, but those two were part of the white-supremacist-cis-patriarchy, so we bundled them together into Presidents Day. Now the country celebrates the birthdays of only two individuals: Jesus Christ and Martin Luther King. But that wasn’t enough for black people, so we now have a federal holiday on Juneteenth, which most Americans hadn’t heard of until last year.

We used to admire Columbus. Benjamin Harrison made the first presidential proclamation on Columbus in 1892, the 400th anniversary of the discovery, recognizing what he called “the pioneer of progress and enlightenment.” Now, he is the pioneer of slavery and genocide. Columbus Day is still a national holiday, but for how much longer? The New York Times says that last year, Mr. Biden celebrated Indigenous Peoples’ Day and that more than a dozen states have dumped Columbus in favor of the Indians. At least 130 cities have made the switch, too, including Columbus, Ohio, the biggest city named after Columbus. And it is, of course, a scandal that every US dollar banknote has a white man on it. That is why we will be getting this replacement for Andrew Jackson on the twenty.

Jackson owned slaves. Who else will the government replace? Instead of Hamilton on the ten, how about a black version of Aaron Burr? In today’s America, anything is possible, so long as it’s “diverse,” which is to say, replaces white people.

His first day in office, Joe Biden issued an executive order on diversity, equity, and inclusion to requires every part of the entire 2.7 million-man federal bureaucracy to submit a plan to discriminate in favor of everyone who has been “systematically denied a full opportunity to participate in aspects of economic, social, and civic life.”

That means recruit, promote, and celebrate everyone but white people.

At State Street Bank, which manages $4 trillion in assets, anyone who actually wants to hire a white man needs special, top-level approval. Anywhere you find a lot of white people, it’s a problem — or a threat — and has to be fixed: Classical music, the National Hockey League, Astronomy, art museums, national parks, the faculty of Harvard, your last dinner party. And when I say everything that’s white, I mean everything: “Colorful World of Birding Has Conspicuous Lack of People of Color.” Ninety-three percent of bird watchers are white, and that’s unacceptable. What if white people like being around other white people? That’s not allowed.

What is so awful about us, anyway? Raul Grijalva, congressman from Arizona has the generic explanation: “the reality for communities of color in this country is that the destruction of black and brown lives goes unpunished.”

We got specifics from the Smithsonian. The Museum of African American History & Culture explains that white people have set up “social identities and systems of oppression” to make sure white people have privilege and to keep everyone else at the bottom.

It made a handy infographic of some of the awful things white people do. However, to say whites oppress others by working hard, planning for the future, and understanding cause and effect suggested that black people shouldn’t bother with these things, so the museum took the list down, but it still tells white people: “If you identify as white, acknowledging your white racial identity and its privileges is a crucial step to help end racism. Facing your whiteness is hard and can result in feelings of guilt, sadness, confusion, defensiveness, or fear.” Facing up to whiteness brings guilt, sadness, and fear because being white is bad. But your sadness and fear are the price you must pay for justice. You see, top brass were horrified when several veterans and one active-duty soldier were arrested after the Jan 6 riot which, we are told, was about white supremacy, so Defense secretary Lloyd Austin ordered every military operation everywhere in the world shut down for a day of instruction on rooting out white supremacy. I have never heard of a white supremacist threat in the ranks, but according to new rules, a soldier can be punished just for reposting or even “liking” anything DOD thinks is “white nationalism.”

Something else Joe Biden did was reintroduce Critical Race Theory training throughout the federal government. I don’t have any clips of government training, but here’s one from the private sector. [[0:00 – 0:47]] If you look closely, Ashleigh Shackelford had her Paypal account info on the flip chart. That was so those nice white ladies in the audience could send her reparations directly. Maybe not all CRT training goes so far as to say white people aren’t human, but the message always is that we are guilty because we are white.

You may recall that Coca Cola had mandatory employee training on understanding and challenging what it means to be white. The main message to us was, “Be less white.” How do you do that? Don’t be the things that make you white: oppressive, arrogant, certain, defensive, and ignorant. Christopher Rufo has found this kind of anti-white indoctrination throughout the federal government and in countless private companies.

Companies wouldn’t have to spend money on CRT training if they had fewer of us on the payroll to begin with. And so, “United Airlines vows 50% of new pilots hired will be women or minorities.”

White men, who are now 80 percent of their pilots, go to the back of the bus.

White doctors perpetuate racism just by being white, so we want fewer of them, too, even if it means training underqualified blacks and Hispanics. This graph on who gets in tells you just how much the deck is stacked against whites (and also Asians.) And remember the advantages non-whites got during Covid? ‘Too White’ To Get COVID Vaccine? Some Social Justice Activists Say Yes.” As one “expert” explained to the New York Times, “[I]t is reasonable to put essential workers ahead of older adults, given their risks, and that they are disproportionately minorities. ‘Older populations are whiter’.”

That makes them expendable.

Google snubs white people. This is what you get if you ask it for “American inventors.” Two token white men.

And here’s Google’s idea of “happy white women.” Not one white couple, but quite a few mixed marriages. Maybe miscegenation is the final solution to the problem of white people.

You can even erase famous white characters from the past. If you make a movie or TV show, give the part to a non-white, preferably black.

It’s quite a collection here, isn’t it? And you can be sure there will be many more.

Do you begin to detect a certain hostility? These people have sure picked it up: [[0:00 – 0:47]] That’s just half the people in this video, but you get the idea. And we mustn’t forget tenured professor, Brittney Cooper’s solution to the question of what to do about white people: [[1:48 – 1:53]] Can’t say that? Well, she just did, and her career as a core faculty member at Rutgers hasn’t suffered at all. Some blacks take the problem into their own hands. Here are statistics from the National Crime Victimization Survey, in which a huge sample of Americans describe violence of which they have been victims and say who attacked them.

So, what are white people to think about this? More to the point, what are we to do about it? That will be for Part II, next week.

Jared Taylor is the editor of American Renaissance and the author of Paved With Good Intentions, White Identity, and If We Do Nothing.
< Foreign-Born Population Hits Nearly 48 Million in September 2022
Integration Made Me a Believer in Segregation >
Blog
Commentary
Videos
Podcasts
Follow us