Alabama TikTok star Mama Tot shared her grief and frustration on the social media platform Friday, telling her 8.7 million followers how she feels after the man accused of fatally shooting her son in a botched pot deal turned himself in and was charged with murder.

Ophelia Nichols, the real name of the social media star, told how she felt a sense of sorrow when she first saw a photo of Reuben Gulley, 20, who Prichard, Ala., police say shot her son, Randon Lee, 19, in a local gas station. 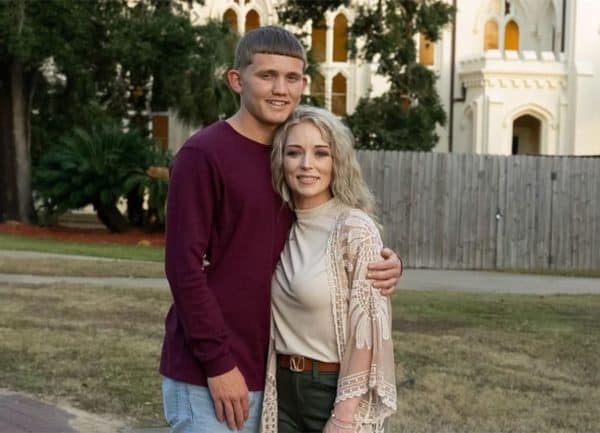 ‘I am not happy,’ she said. ‘When I seen that mugshot last night, I thought to myself, ‘My goodness, he’s just a baby.’

She said she saw comments from the suspect’s teachers online saying ‘he was a lovely young man.’

‘I’ll be he was,’ she said. ‘That just made me think within 11 seconds he made a decision to just throw his life away.’

Nichols said she found commonality between Gulley’s life and her son’s.

‘There’s one thing that he and my baby child had in common and that is that they both have a mother that would do absolutely anything for them,’ she said, choking back tears. ‘So remember that there are two families that are hurting. There’s two of us.’

Gulley, of Saraland, Ala., turned himself in Thursday at the Mobile County Jail on a warrant for his arrest for Lee’s murder.

Lee, who had just turned 19, was a smalltime pot dealer in the area who had sold weed to Gulley before.

But on the night of June 24, surveillance footage shows Lee met up with his killer, each pulling up to a gas station pump in their respective cars.

One of the suspects, who police believe is Gulley, can be seen getting into Lee’s car where he fired the fatal shot.

He then got back into his own vehicle before speeding off.

After being shot, Lee managed to drive to another gas station, where he died, Prichard Police Detective Jason Hadaway said.

‘We do know at this time that Mr. Lee did have a relationship as far as selling to different individuals. These two individuals had bought from him in the past,’ the detective said.

Lee was not on the local police’s radar as someone known to them to be selling drugs.

‘We did everything we could to keep him on the right track but this past year everybody thought he was because he was doing so good,’ Nichols said. ‘But (it) gives nobody the right to shoot my son. That’s all I know.’

She said that one of the most painful things was hearing the judgements of her son from people in the community.

‘What hurt me really big was when this all come out was people in my town – people I grew up with, shop at the same stores that they do – made such terrible comments about my baby child,’ she said.

‘I thought, why? You don’t even know him. Then I thought, “Lord, I hope she don’t go through that,” ‘ Nichols said, referring to Gulley’s mother. She shook her head an bit her lip.

‘I don’t wish that on anybody. That was really hard for me,’ she said. ‘Neither one of our children should have been there that night. Neither one of them.’

I know it’s going to be a long road to justice,’ Nichols said. ‘And I hope it’s done right.

In another TikTok video posted later on Friday, she sits in her car and express frustration over the attention she’s getting over Gulley’s arrest and the entertainment value it has for some followers.

‘My baby child’s life isn’t a funny gossip story that happened in a funny small town a month ago that we can laugh about it today. This was my child’s life and my child was murdered.’