Rémi Tremblay is the spokesman for a patriotic Quebec organization known as Fédération des Québecois de Souche. Earlier this summer, the group invited Jared Taylor to speak near Montreal. In the following interview, Mr. Tremblay explains the work of the federation.

AR: First, how would you translate the name of your organization, Federation des Quebecois de Souche, and what are its goals and activities?

I think the best way to translate our name would be Federation of Old Stock Quebecers. “Old stock” emphasizes that we are a distinct people, and want to stay that way. Before the so-called “Quiet Revolution” of the 1960s, we used to be called French Canadians, which applied to a distinct ethnicity. That term was replaced by an inclusive one, “Quebecer,” which is like “Canadian” or “American.” If anyone can be a Quebecer we find that the term is meaningless. Others have tried to define what a Quebecer is, with definitions ranging from “anyone living in Quebec” to “anyone who likes Quebec.” This does not represent us; Québécois de souche describes who we really are. “Now or never! Masters in our own house.”

Our goal is to preserve our people and defend its interests. Living as a minority on a continent mostly populated with English-speaking people, Quebecers are intuitively conscious of their ethnic identity and interests. However, we differ from most Quebec nationalist groups because we think that the greatest threat to our survival is not our Anglo-Saxon neighbors, but immigration and multiculturalism. So our concrete objective is to end immigration and to stop multiculturalist nonsense.

Our activities range from demonstrations to lectures, with a great emphasis on spreading our message. Our activists hand out thousands of flyers each year explaining our goals on specific issues such as immigration.

Please tell us a little about your background and why you started FQS.

The FQS was started in 2007 when our province was shocked by religious accommodations granted to minorities. All major universities started opening Muslim prayer rooms, and a gym in Montreal had to blacken its windows so young Orthodox Jews could not see the women. Sikhs were allowed to wear their turbans as police officers or while they played sports, etc, etc. All these religious measures — called “reasonable accommodation” — angered the population, so the government set up an investigative commission. The people heading the commission were Charles Taylor, an avowed Marxist, and Gérard Bouchard, a devout multiculturalist who coined the term “interculturalism” to replace the hated term, multiculturalism. They defended the minorities, and were very rude to anyone opposing such accommodations. People were angrier than ever.

It was in this context that we founded FQS. Originally it was only a web forum where people could express their anger. Since then, it has evolved into a website that has become a reference for the activist and nationalist movement in Quebec and into a real organization with activists all around the province. We now publish a magazine, we have organized demonstrations and lectures, and every week we continue to attract new people to our cause.

Does Quebec have its own immigration policy, and if so, how does it operate?

We are the only province that has its own immigration policy, which means that since 1991, Quebec chooses most of its immigrants. Because we are French-speaking, our selection of immigrants revolves around language. We can also decide how many immigrants we want to accept in the province. Right now we are accepting about 55,000 a year, which is a lot for a province of seven million. Of course, anyone who immigrates to another Canadian province under the federal immigration policy is free to move to Quebec.

What is the percentage of non-whites in Quebec, where are they concentrated, and what countries do they come from?

How can this be, if most immigrants come from French-speaking countries?

The majority of immigrants are said to speak French, and the majority come from French-speaking countries, but others do not. Of course, immigrants from China, Iran or the Philippines usually don’t speak a word of French, and it is unlikely that their children will learn French. It is entirely possible to live and survive in Montreal without speaking French. You must then add to these immigrants who don’t speak French, the immigrants who arrived in other provinces and decided to move to Montreal after landing in Canada. And of course, we accept a lot of refuges who are not screened for language. So the result is that non-French children are the majority in Montreal schools.

How do opinions about immigration differ among Quebecers by region, by age, social level, etc?

I would say that in what we called the “regions”–everything outside of Quebec City and Montreal–there is strong opposition to immigration. I remember we were handing out flyers in a small town against immigration and a local resident saw the word “Immigration” on the flyer. He did not read it and started insulting us because he thought we were promoting immigration!

So outside the urban centers, Quebecers are much closer to their roots and are more nationalistic than in Montreal or Quebec City. Political correctness has never made its way through Quebec’s rural areas and we are often surprised by the things we hear people say.

As for age and social level, there are no studies on the subject, so I can speak only from personal experience. I would say that older people tend to be more critical of immigration, but most of the activists we have are young. As for social level, I would say that people who attended university are less likely to support us. These people can live in rich areas where they don’t need to cope with multiculturalism, so the only thing they know about it is the utopian description they were given by their professors.

Do you have a better chance of achieving your goals if Quebec remains part of Canada, or would you prefer independence?

We do not advocate independence for its own sake. Most of the independence movements just want to copy the Canadian multiculturalist system. I would say that Quebec’s major separatist party, the Parti Québécois, is very similar to the Scottish Nationalist Party: left leaning, pro-immigration, etc.

Nevertheless, we lean toward promoting independence. Because of its unique situation, Quebec has always been more nationalistic and conscious of its ethnic interests than the rest of Canada, where multiculturalism is more accepted than it is here. Our country exemplifies the destructive relationship two European people can have. Instead of working hand in hand with English-speaking Canadians, our peoples are divided by what Tom Sunic calls reactive nationalism. Very often our interaction is based on opposition rather than cooperation, which does not make sense because we both face the same problems.

We do think it could be easier to preserve our people and our culture if we were independent, but it is very late. In 1995, when we had a referendum on sovereignty, the federal government fast-tracked thousands of immigration applications because they knew immigrants would vote against an independent Quebec. They literally stuffed the ballot boxes with immigrant votes. As our premier, Jacques Parizeau, said after the loss, we lost “because of money and the ethnic vote.”

Are you in contact with French nationalists and identitarians? If so, please tell us about them.

Yes, we are and have been in contact with several French organizations. Because Quebec is a very small nation, most of the nationalist/identitarian books and movies available in French come from France. So, of course, we are in contact and work with several organizations. There is very strong pressure on some of the organizations we work with, however, and I would prefer not to name them.

In France there is repression against everything nationalist. Activists have been arrested on trivial charges and organizations are dismantled by the government.

Is there is a strong “anti-racist” movement in Quebec? Can you hold meetings openly?

There is an “antifascist” movement in Montreal, but it is simply a code word; these are anarchists and they are basically anti-everything-that-is-not-them. In Montreal, left-wing radicals are extremely violent and have committed all the terrorist attacks that occurred on our land over the last 10 years or even more if we go back to the FLQ (Liberation Front of Quebec) of the ’60s. They are so violent that there is a special police unit, Gamma, to monitor their activities. 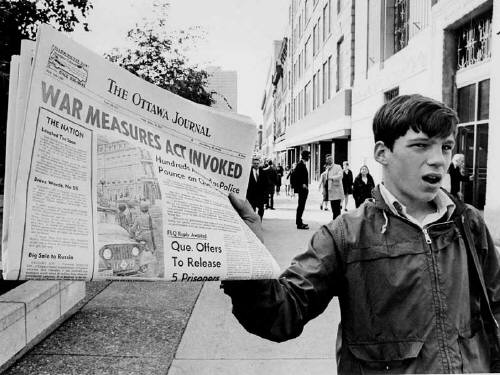 During the October Crisis, the Liberation Front of Quebec kidnapped two government officials. This led to the suspension of civil liberties during peacetime.

They oppose us but they also oppose populist radio hosts, conservative journalists, etc. I think they want to silence everybody who does not think as they do. They never debate; their motto is, “We don’t discuss with Nazis.” Of course, for them, everyone is a Nazi. The media are Nazi, the government is Nazi, the police are Nazi, so of course, for them we are Nazis. I tried to find one single politician who has never been labeled a Nazi, and even the far-left Amir Khadir (of Québec Solidaire) has been labeled a Nazi by English-speaking anarchists.

Over the years they have threatened us quite a few times over the Internet and have confronted us on the streets a few times, but there have been no major disturbances. Our demonstrations are held openly, but our lectures are usually private. “Antifascists” like to make bomb calls or threaten the owner of the rooms we rent, and when we invite foreign speakers, they call the border agency to try to prevent them from coming into Canada (however, the border agency is Nazi when it arrests illegal immigrants). Most of the time their actions give us free publicity and a chance to reach a broader audience.

Please tell us anything else you think Americans should know about your movement.

We invite you to communicate with us. Most of our staff speaks English and we will be happy to answer any questions you may have. We want to encourage a more pan-European approach.

Also, it is important to keep being active. We cannot sit and watch our countries being destroyed. No act is in vain; every small action counts!

Jared Taylor is the editor of American Renaissance and the author of Paved With Good Intentions, White Identity, and If We Do Nothing.
< Mountain Lakes School District Discriminates Against White Students: Lawsuit
“Kum Ba Yah” >
Blog
Commentary
Videos
Podcasts
Follow us