A mom who was left with a critical brain injury after being dragged down stairs by a mugger at a Manhattan subway station may never wake up, her son has said.

Than Htwe, 58, and her son, Kyaw Zaw Hein, 22 were walking up the steps at Canal Street station at around 10:45am on Saturday when an assailant attacked them from behind, grabbing the son’s backpack. 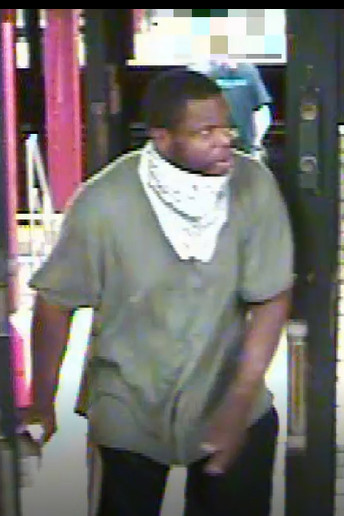 The suspect in the attack.

Hein was not seriously hurt, but his mother hit her head and was critically injured.

They were rushed to Bellevue Hospital Saturday morning, where Htwe underwent brain surgery and remains in critical condition.

But Hein says doctors have now told him that his mother ‘won’t be able to wake up.’

‘The doctors told us that the trauma to her head was so severe that she won’t be able to wake up,’ Hein wrote in a heartbreaking GoFundMe post.

‘Eventually all her organs will shut down. We are now just waiting and worrying about what happens next.’

As the mugger yanked on Hein’s backpack, he tumbled backward. As he began to fall, he reached for his mom, who stumbled down with him.

Both were knocked unconscious in the fall, and when Hein woke he say his mother ‘lying on the floor with blood everywhere’, according to the GoFundMe post.

She has undergone surgery at hospital for her head injury, but remains in a coma, her family said.

Htwe moved to New York from Myanmar in 2018 to be closer to Hein, as well as their extended family.

‘After hearing this about a mother who was kind hearted and respectful. Who was willing to move to a new country to give her one and only child a better life, really saddens us,’ the GoFundMe post read. ‘All of us are heartbroken and shocked by how the events have turned out.’

Police are appealing for information on the attacker. They are also investigating whether the attack was racially motivated.

Shortly after the incident, police released a photo of the suspect and asked that anyone who recognizes him to call police. Anyone with information is asked to call Crime Stoppers at (800) 577-TIPS. All calls will be kept confidential.

So far, Hein and his father, Myint Shein, have raised $5,173 on their GoFundMe page. According to the post, all donations will go to Htwe’s husband.

‘I just want to tell everyone who’s reading this, to always cherish the moments you have with your mother,’ the post concluded. ‘Tell her ‘I love you’ or giving her a hug and kiss because you never know what will happen.’

Calls to Hein and his family from DailyMail.com went unanswered.

Hate crimes against Asian Americans are on the rise, with unprovoked attacks happening across the United States.

The number of incidents against Asian Americans reported to the New York Police Department rose from three in 2019 to 28 in 2020.

Activists and police officials say many additional incidents were not classified as hate crimes or went unreported.

Stop AAPI Hate, an initiative that tracks violence and harassment against Asian-Americans and Pacific Islanders, recorded more than 3,000 reported incidents from the start of the pandemic, said Russell Jeung, one of the group’s leaders and chair of the Asian American Studies Department at San Francisco State University.

In December 2020 an Asian Hate Crime Task Force was formed within the NYPD, to encourage victims to report the attacks.

‘If you dare to raise your hand against a member of our Asian communities, you will suffer the consequences,’ he said.

In early May 2021, New York City Mayor Bill De Blasio told radio host Brian Lehrer that the MTA leadership was ‘fearmongering’ when they warned that the NYC subway is becoming unsafe.

Later that month, NYPD transit-police chief Kathleen O’Reilly told an MTA board meeting that ‘crime remains down year to date … a decrease of 46.8%.’

However, those statistics fail to account for the reality that due to the COVID-19 pandemic, ridership has been lower than normal.

Between January 2020 and May of this year, 10 people lost their lives to homicides while riding the New York City subway system, according to a new analysis from the New York Times.

The average number of killings on the subways has been one to two annually since the late 1990s. New York has experienced five years’ worth of homicides in little more than a year.