Paul Gottfried Replies to Our Review of The Vanishing Tradition

I was disappointed but not really surprised to read Hubert Collins’s critical review of our anthology The Vanishing Tradition, which the reviewer described as something that came out of a “time capsule.” Collins properly noted the anthology is short on information dealing with the last five years; and for those who want works of mine that that address current issues on what purports to be the Right, Conservatism in America (Palgrave-Macmillan, 2007) might be a better place to start. It is not my intention to argue these points with the reviewer, who has treated some of my earlier work with generous praise. He is correct, moreover, to note that anyone who is interested in a critical study of conservatism, inc. centering on present battles would do well to look elsewhere. But I most certainly did not edit the anthology Collins reviewed to engage the specific question of where the conservative movement has been in the last five years. I wrote my contributions and enlisted others to write theirs to illuminate the genesis and development of what now claims to be a “conservative movement.” If there is a focal point to our collection, it would be explaining how a movement that is not in any way part of an historic Right and which exhibits sometimes shocking intellectual vulgarity has captured and monopolized the Left’s authorized opposition. This explanation cannot reasonably start with recent events but must go back to the 1980s and even earlier. 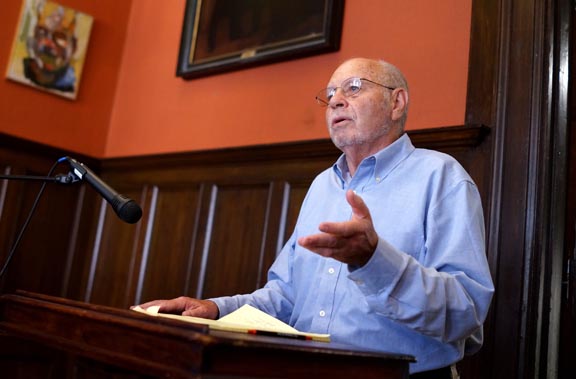 If Collins in unhappy that we dredge up incidents from the past, this anamnestic act seems necessary to make clear to a younger generation how media conservatism came to power and in what circumstances this occurred. Most younger people, that is, those who have not yet reached middle age, have no idea of what the Right was like before its present captors seized it. And there is no reason they would, given the disparity in media resources held by the establishment and by those on its right. Although our anthology may not provide the reviewer with new revelations, it will surely help enlighten those who know less about the events and misrepresentations we discuss.

View all posts by Paul Gottfried

Paul Gottfried is the author of many books on European social and intellectual history and on the rise of the democratic managerial state, including Multiculturalism and the Politics of Guilt and Conservatism in America.
< White Ethnomasochism: A Global Sickness
Paris Attack: Two Hurt in Stabbing Near Former Charlie Hebdo Office >
Blog
Commentary
Videos
Podcasts
Follow us