Face of the First Briton Is Revealed

The ‘extraordinary’ findings were made by cutting-edge genetic tests and facial reconstruction techniques carried out for the first time on the bones of ‘Cheddar Man’ who died 10,000 years ago.

The bones, found in Somerset’s Cheddar Gorge, are the oldest near-complete human skeleton ever found in Britain and scientists said they were surprised to discover that the earliest Briton would be considered ‘black’ if he lived today.

The research suggests the first inhabitants of the British isles developed white skin later on than previously thought.

Experts also revealed that Cheddar Man is directly related to 1 in 10 people living in the UK today.

The first ancient Britons had black skin, dark curly hair and blue eyes, DNA tests show. The findings were made by genetic tests carried out for the first time on the bones of ‘Cheddar Man’ who died 10,000 years ago. The bones are the oldest near-complete human skeleton ever found in Britain

The Natural History Museum and Channel 4 unveiled a reconstruction of the ancient human yesterday, which was made for a documentary: The First Brit: Secrets of the 10,000 Year Old Man.

Cheddar Man’s bones caused a sensation when they were unearthed in Cheddar Gorge, Somerset in 1903.

For more than 100 years, scientists have tried to reveal Cheddar Man’s story, posing theories as to what he looked like, where he came from and what he can tell us about our earliest ancestors.

Only now with cutting-edge DNA and facial reconstruction techniques can we see for the first time the face of this 10,000 year old man, and ask how 300 generations later he relates to us today.

Experts from the museum and University College London conducted genetic tests on the remains, discovered in Gough’s Cave, which were taken by drilling a bone in the skull and sequencing the DNA preserved inside.

Dr Tom Booth, a scientist from the museum said that the findings that there was a 76 per cent chance that Cheddar Man was ‘dark to black’ – was ‘extraordinary’.

He said in the documentary: ‘If a human with that colour skin wandered around now, we’d call him black, and a lot darker than we’d expect for Europe as well.

He added: ‘It really shows up that these imaginary racial categories that we have are really very modern constructions, or very recent constructions that are really not applicable to the past at all.’

Dr Rick Schulting, an archaeology professor at Oxford University said: ‘It may be that we may have to rethink some of our notions of what it is to be British, what we expect a Briton to look like at this time.’

A previous reconstruction of Cheddar Man, made by the University of Manchester before DNA tests were available, depicted him with white skin.

Experts from the museum and University College London genetic tests on the remains, taken by drilling a bone in the skull and sequencing the DNA preserved inside

Professor Ian Barnes, a geneticist, who worked on the investigation said the discovery that the first Briton was black was not expected.

Britain in the Mesolithic era, the Middle stone age around 8,000 BC, was a very different place from today.

An Ice Age had just finished and the land had become green again. Herds of aurochs – huge, wild cattle – and red deer roamed the land.

Perhaps in pursuit of game, hunter gathering tribes swept in from what is now continental Europe across a land bridge across the North Sea – known as Doggerland.

Genetically, he belonged to a group of people known as the ‘Western Hunter-Gatherers’, Mesolithic-era individuals from Spain, Hungary and Luxembourg.

His ancestors migrated to Europe from the Middle East after the Ice Age and today, 10 per cent of White British people are descended from the group.

Scientists have reconstructed the Cheddar Man’s face several times using the shape of his skull and assumptions about the appearance of the first Britons.

Most of these analyses were not based on DNA data, and assumed he was white with light hair.

The total human population in Britain was then just 12,000.

Tests on the DNA of modern Britons reveal we have around 10 per cent of our DNA in common with Cheddar Man and his tribe.

Close genetic matches to Cheddar Man have been found in remains in western Europe at sites including Spain, Hungary and Luxembourg.

Scientists say that Cheddar Man’s ancestors arrived in the Britain via the Middle East, after coming out of Africa.

Professor Ian Barnes, research leader at the Natural History Museum, said at a screening of the documentary: ‘For me, it’s not just the skin colour that’s interesting, it’s that combination of features that make him look not like anyone that you’d see today.

‘Not just dark skin and blue eyes, because you can get that combination, but also the face shape. So all of this combines together and make him just not the same as people you see around today.’

Professor Barnes added that although this was just one individual, he said: ‘At the moment I’d suggest this is a good model for what the rest of Britain looked like.’

Cheddar Man’s bones caused a sensation when they were unearthed in Cheddar Gorge, Somerset in 1903.

For more than 100 years, scientists have tried to reveal Cheddar Man’s story, posing theories as to what he looked like, where he came from and what he can tell us about our earliest ancestors.

A reconstruction of Cheddar Man, who died 10,000 years ago, in 1998 by the University of Manchester depicted him with white skin.

They scanned the skull and a 3D model was produced by ‘paleo artists’ Alfons and Adrie Kennis, Dutch identical twins who make life-like reconstructions of extinct mammals and early humans.

The brothers, who have created reconstructions for museums around the world and usually create models of Neanderthals, spent three months creating Cheddar Man.

‘It’s really nice to make a more graceful man, not a heavy-browed Neanderthal. So we were very excited that it was a guy from after the Ice Age. We were very interested in what kind of human he was,’ said Alfons.

‘With the new DNA information it was really revolutionary. And it allowed us to look more at race, this revealed stuff that we’d never had known before.’

Cheddar Man, is thought to have had a relatively good diet, and his bones suggest that he would be much stronger than most people today

Cheddar Man, is thought to have had a relatively good diet, and his bones suggest that he would be much stronger than most people today.

Although previous populations had settled in Britain long before his arrival, they were wiped out before him and he marked the start of continuous habitation on the island.

Professor Mark Thomas said one theory is that white skin developed in Britain and western Europe after our ancestors switched to farming – and began to eat less meat.

This meant that instead of getting a lot of Vitamin D from liver and fish, they needed to get more from sunlight, which meant they needed fairer skin.

Alfons Kennis said: ‘People define themselves by which country they’re from, and they assume that their ancestors were just like them.

‘And then suddenly new research shows that we used to be a totally different people with a different genetic makeup.

‘People will be surprised, and maybe it will make immigrants feel a bit more involved in the story. And maybe it gets rid of the idea that you have to look a certain way to be from somewhere. We are all immigrants.’

Dr Silvia Bello, along with the Natural History Museum’s Professor Chris Stringer, has spent the last ten years analysing the bones of the earlier inhabitants of the cave which date back nearly 5,000 years before Cheddar Man.

They have established that these early humans were cannibals.

These temporary visitors came during an ice-age thaw but were driven out, like all previous humans in Britain, when temperatures dropped again.

They have studied cups made from human skulls which suggest this cannibalistic behaviour was driven by a type of ritual rather than starvation.

The DNA profile of Cheddar Man has revealed that, although they were found in the very same cave, he shares no direct ancestry with these earlier cannibals. 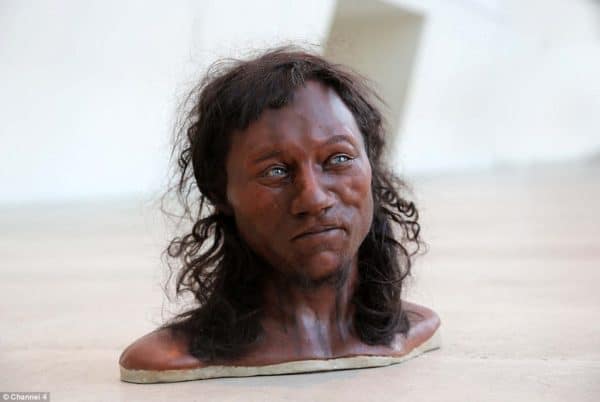