The murdered British soldier executed by two Islamist fanatics was tonight praised by his grieving family as ‘a loving son, husband, father, brother and uncle who would do anything for anybody’.

Lee Rigby – a 25-year-old ‘cheeky and humorous’ serviceman described as a ‘loving father’ to his two-year-old son Jack – was identified as police guarded his home in Middleton, Greater Manchester. 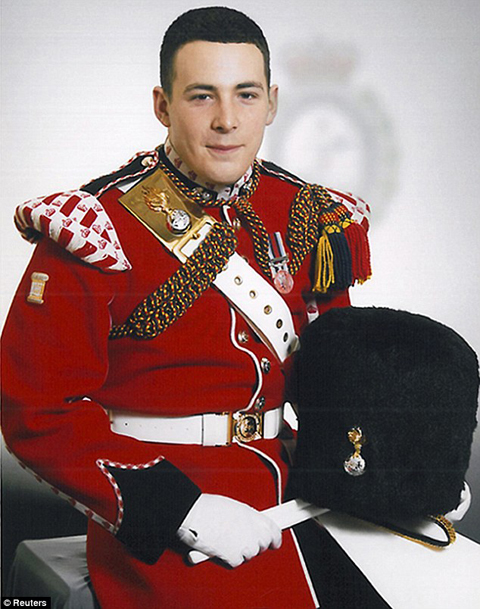 His family tonight paid tribute to ‘a loving son, husband, father, brother and uncle’, adding that ‘he always wanted to be in the Army, live life and enjoy himself’.

Drummer Rigby, a keen football fan who followed Manchester United FC, was just starting his Army career and had recently fought in Afghanistan with the Royal Regiment of Fusiliers.

But as he walked towards the Royal Artillery Barracks in Woolwich, south-east London, yesterday afternoon, he was run down by a car on the pavement and hacked to death in a shocking attack.

A statement from Drummer Rigby’s family tonight said: ‘Lee was lovely. He would do anything for anybody – he always looked after his sisters and always protected them.

‘He took a “big brother” role with everyone. All he wanted to do from when he was a little boy was be in the Army. He wanted to live life and enjoy himself.

‘His family meant everything to him. He was a loving son, husband, father, brother and uncle – and a friend to many. We ask that our privacy be respected at this difficult time.’

‘All he wanted to do from when he was a little boy was be in the Army. He was a loving son, husband, father, brother and uncle – and a friend to many.’

Drummer Rigby was known to his comrades as ‘Riggers’, who said he was a ‘popular’ and ‘very bubbly character’. He was ‘one of the battalion’s great characters, always smiling’, friends said.

Tonight, U.S. President Barack Obama offered his support to Britain, saying: ‘The United States stands resolute with the United Kingdom, our ally and friend, against violent extremism and terror.

‘There can be absolutely no justification for such acts, and our thoughts and prayers are with the family of the victim, the police and security services responding to this horrific act and the communities they serve, and the British people.’

The dead soldier, who was wearing a Help for Heroes top, was hit by a Vauxhall Tigra on the pavement before two crazed men attacked him with knives in a suspected terror attack.

Witnesses said the suspects ‘hacked and chopped’ at his body and were shouting ‘Allah Akbar!’ – an Islamic phrase meaning ‘God is great’ – and yelling ‘this is what God would have wanted.’

One of the men was identified as Michael Adebolajo, 28, who ranted on camera with a clear south London accent saying ‘you people will never be safe’.

The suspected killers were later shot by police and will be questioned by anti-terror officers once they have recovered.

Prime Minister David Cameron said the murder of a ‘brave soldier’ on the streets of London will bring the UK together and ‘make us stronger’.

Speaking outside Downing Street after chairing a meeting of the Government’s emergency Cobra committee, the Prime Minister said the attack ‘sickens us all’ and was a ‘betrayal of Islam’.

‘The people who did this were trying to divide us. They should know something like this will only bring us together and make us stronger,’ he said.

‘This country will be absolutely resolute in its stand against violent extremism and terror. We will never give in to terror or terrorism in any of its forms.

‘This view is shared by every community in our country. This was not just an attack on Britain and on the British way of life; it was also a betrayal of Islam and of the Muslim communities who give so much to our country.’

Labour leader Ed Miliband said in a televised statement that the killing was an attempt to divide Britain which would fail.

‘This was an appalling and horrific murder and all of my condolences are with the families and friends of the victim, and indeed with our troops because they serve incredibly bravely all around the world and they’ve seen one of their own murdered in an act of complete cowardice,’ he said.

‘There are people who try to divide us with acts like this. They’ve tried it before in London and they’ve failed and they will always fail.

‘There will be people who try to use events like this to divide us and they will fail too.
‘They will fail because the British people are united across different faiths, different religions, different backgrounds, in their abhorrence of this and in values of decency and tolerance.’

Members of the public were making special donations to the Help for Heroes charity today who assist wounded servicemen, as the victim was wearing one of their t-shirts.