The Yellow Vest protests in France befuddle many Americans. The movement defies the usual political categories and seems to have no clear goal. The impetus for the sometimes violent protests was a hike in gas taxes, but the movement’s energy has expanded far beyond a single issue. The greater significance is that a European people is willing to revolt against its rulers. The Yellow Vests have sent their government a message with street action — and the government is listening.

Some on the Right have attacked the protesters for their violence and aggression. Others have cried out against the Yellow Vests’ “socialism” and support for big government. And a few believed, at least initially, that the rioters were mainly Muslim immigrants, and painted the demonstrations as chaos imported from the Third World.

All of these criticisms are off the mark, especially the last one. The vast majority of the Yellow Vests aren’t foreigners — they’re working- and middle-class Frenchmen struggling to make ends meet. Most of the protesters are from villages and small towns, not the immigrant banlieues. According to one poll, 42 percent of those who says they are Yellow Vests voted for the National Front in the first round of the presidential election — the largest percentage for any party by far. Ninety-two percent of National Rally (the new name for the Front) voters sympathize with the movement, and some surveys show Yellow Vests are likely to vote for the rally in the 2019 European elections. Some leaders of the movement have even called for a right-wing general to take over the government.

It is true that demands so far have little to do with immigration and other identitiarian concerns: end pension cuts, reduce taxes, increase the minimum wage, and boost subsidies for hiring young workers. The only vaguely identitarian demand is that immigrants must “integrate.” President Emanuel Macron has capitulated in the face of some of these demands, with promises to scrap the tax hike and increase the minimum wage. However, those concessions have done little to quell the Yellow Vests’ anger. 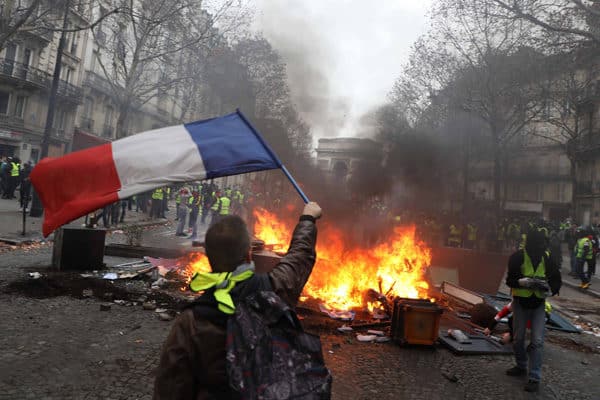 Protesters are surrounded by teargas during the ‘yellow vests’ demonstration on the Champs Elysees. (Credit Image: © Maxppp via ZUMA Press)

That’s because, as some observers suggest, this is a protest by “Middle Frenchmen” against Mr. Macron and his globalist agenda. They say they won’t stop until he is gone. The general support for Yellow Vests (78 percent) corresponds well with Macron’s low approval rating (23 percent), and the number of French who believe their country needs no more immigration (79 percent).

The Yellow Vests’ concerns may not be nationalist on surface, but the battle they’re waging is firmly within the context of the worldwide struggle against globalists. Just look at who is terrified by the protests.

On both sides of the Atlantic, liberal elites have been quick to attack the Yellow Vest movement as a quasi-fascist uprising against “democratic values.” The doyen of respectable French liberalism, Bernard-Henri Lévy, sharply condemned the protests. In a column last week, BHL urged the Yellow Vests to let the police “flush out the violent ‘brown vests’ who will be circulating among them.” According to the liberal philosopher, the Yellow Vests must cast out the “far-right” in order to embrace “republican democracy.” He also defended police violence against the Yellow Vests as necessary to defend of the French republic.

This is coming from the same man who demanded intervention in Libya and Syria because of to their governments’ harsh measures against demonstrators. Are populist revolts legitimate only in the non-western world?

The center-left in France has shown only disgust for the movement. Macron allies have smeared the Yellow Vests as neo-fascists, and the leader of the Socialist Party dismisses the movement because of its association with the far-right. A correspondent for the influential left-wing paper Libération called the protests a “movement of hicks.” A further indication that the movement is nationalist is that Antifa have attacked the Yellow Vests.

Footage of what is said to be French Antifa fighting fascists amidst the #YellowVests protests again today. pic.twitter.com/KVCE2UKlcj

In America, the establishment view has been similar, along with wild conspiracy theories that Vladimir Putin is behind the whole thing. Neoconservative columnist Max Boot wrote an entire op-ed writhing from criticism of his now discredited view that Mr. Macron can defeat populism, and complaining that Russains are egging on the Yellow Vests. The Washington Post editorial board poured scorn on the protesters for attacking Europe’s globalist leader, whom the paper chose to call an “internationalist:”

What does seem likely, unfortunately, is the weakening of one of the relatively few European leaders still standing firmly behind internationalist principles. Mr. Macron has been a leading voice for measures to control climate change and has tried to defend multilateralism from the assaults of President Trump. The danger is not just that Mr. Macron’s efforts to revitalize France’s economy and political system will stall; it is also that his failure will open the door to disastrous alternatives, such as the quasi-fascist Marine Le Pen or the far-left Jean-Luc Mélenchon, who between them captured about 40 percent of the first-round votes for president.

Globalist worries about the Yellow Vests reflect their appeal to nationalists. It’s a movement that wants to give the power back to the forgotten — people who proudly wave the French flag, cherish French traditions, and fear their country is threatened by out-of-touch technocrats and hostile foreigners. Its spontaneous eruption proves that good people can still rise up spontaneously against bad governments. It’s likely that similar movements will arise throughout Europe over immigration. There have already been the spontaneous demonstrations this year against immigrant violence in Chemnitz, Germany, and the Pegida movement.

The Yellow Vests show that millions of Frenchmen are fed up with globalist rule and want sovereignty. The movement is spreading to other European nations and will be a model of further populist protest. All identitarians should shout, “Je suis gilet jaune!”