Al Sharpton and the black commentator Joy Reid were panelists on a recent MSNBC special called “Everyday Racism.” Joy Reid is under attack from mainstream conservatives for comments on her old blog. For example, in 2007 she referred to Senator John McCain as “Baghdad John,” and Photoshopped his head onto the body of Virginia Tech mass murderer Seung-Hui Cho. In 2006, she suggested Wolf Blitzer was too friendly to Israel. She also said it would be great if Ann Coulter would just kill herself. But why is she the one taking fire when Mr. Sharpton is vastly more disreputable?

Mr. Sharpton has been in the public eye ever since the age of nine or ten, when he was ordained a Pentecostal minister. In the 1990s, he became a Baptist minister, and is regular styled as “Reverend Sharpton.” He still occasionally conducts funerals and leads worship services at black churches.

Until 1987, Mr. Sharpton was just one of a score of obscure black rabble-rousers in New York City. That year, a black teenager named Tawana Brawley claimed she had been raped by white men who wrote racial slurs on her body, smeared her with feces, and left her in a garbage bag. With no evidence, Rev. Sharpton named Miss Brawley’s alleged attackers as Harry Crist Jr., a police officer who committed suicide soon after, and New York assistant DA Steven Pagones.

Rev. Sharpton suggested the entire judicial process was a fraud. He said asking Miss Brawley’s advisers to meet with prosecutors was “like asking someone who watched someone killed in the gas chamber to sit down with Mr. Hitler.”

The case received a huge amount of media attention, coupled with the usual hand-wringing about institutional racism. However, a grand jury eventually found that Miss Brawley had invented the assault. Mr. Pagones later successfully sued Miss Brawley, Mr. Sharpton, and two of Miss Brawley’s other advisers for defamation. Mr. Sharpton was ordered to pay Mr. Pagones $65,000 but never did. He was such an embarrassing deadbeat that rich friends, including Johnnie Cochran Jr. and Earl Graves Jr., president of Black Enterprise magazine, chipped in to pay the fine for him.

Mr. Sharpton has never admitted he ever did anything wrong. In 2013, he was still suggesting there had been foul play. “Whatever happened, you’re dealing with a minor who was missing for four days so clearly something happened,” he said in a New York Times “Retro Report” film. (12:54)

The attention he got in the Brawley case made Mr. Sharpton a national “civil rights” leader. In 1995, he led protests against Freddy’s Fashion Mart, a Jewish-owned store that had raised the rent on a black sub-tenant. He called the owner a “white interloper” in Harlem. Others involved in the protests used far more heated language, denouncing “bloodsucking Jews,” “crackers,” and “Toms,” the latter referring to Freddy’s black customers. Shortly afterwards, a black man named Roland Smith, who had taken part in the protests, walked into Freddy’s with a gun, ordered all blacks — except the security guard — to leave, and set the building on fire. Eight people died, including the black security guard.

Al Sharpton has also been blamed for helping incite the 1991 Crown Heights riots. Gavin Cato, a seven-year-old son of Guyanese immigrants, was killed by a Jewish driver in a car accident initially caused by a black driver running a red light. Angry crowds of blacks vowed to target Jews in response, and hours after the accident, a black mob killed a passing Orthodox Jew, Yankel Rosenbaum. There were three more days of violence, with Mr. Sharpton stepping in to lead protests on the second day. He egged the rioters on with chants of “no justice, no peace,” never denounced the Rosenbaum murder, and encouraged black anti-Semites by talking about “the diamond merchants right here in Crown Heights.” 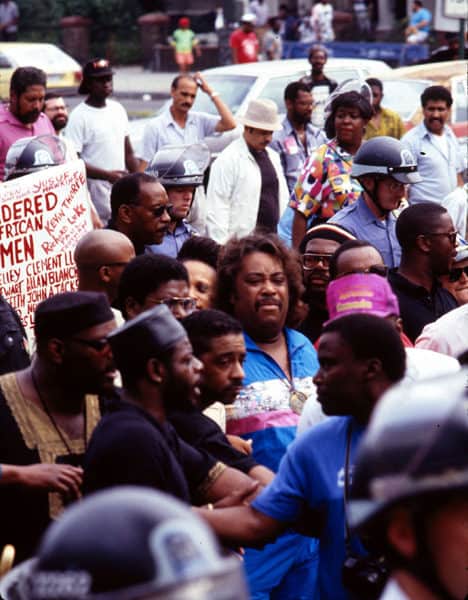 Twenty years later, he admitted that “our language and tone sometimes exacerbated tensions and played to the extremists,” though he apologized for nothing.

In 1994, Mr. Sharpton gave a speech on Afrocentrism at Kean University. You can hear part of it here:

We built pyramids before Donald Trump even knew what architecture was. We taught philosophy and astrology [sic] and mathematics before Socrates and them Greek homos ever got around to it . . . . Do some cracker come and tell you, ‘Well my mother and father blood go back to the Mayflower,’ you better hold your pocket. That ain’t nothing to be proud of, that means their forefathers was crooks.

Besides talking about “them Greek homos,” Mr. Sharpton called a man a “punk faggot” on the Robert Downey Jr. radio program and challenged him to a fight.

Mr. Sharpton called the then-Mayor of New York City David Dinkins a “ni**er,” adding that if a “black man stood up next to you [Dinkins], they would see you for the whore that you really are.” Rev. Sharpton was also caught on tape denouncing Koreans and “Chinamen” who do business in black neighborhoods, and telling blacks not to buy watermelons from them.

In 2007, Mr. Sharpton denounced presidential candidate Mitt Romney: “As for the one Mormon running for office, those that really believe in God will defeat him anyway so don’t worry about that.”

After he was slammed for suggesting that Mormons are atheists, Mr. Sharpton tried to deflect criticism with his usual race-baiting, complaining that church had kept blacks out of the priesthood for most of its history. Under pressure, he apologized to the Mormon Church, but not to Mr. Romney.

According to the book Inside the Nation of Islam by Vibert L. White Jr., it was Al Sharpton who pressured Louis Farrakhan to allow Khalid Abdul Muhammed to speak in 1996 at the one-year anniversary of the Million Man March in New York. That was after Mr. Muhammad was expelled from the Nation for explaining how whites in South Africa should be treated:

Rev. Sharpton wanted a warmer welcome for this man than Louis Farrakhan did.

Al Sharpton is now an enforcer of politically correctness. In 2007, he successfully lobbied to have radio host Don Imus fired after he referred to the Rutgers women’s basketball team as “nappy headed hos.”

In 2014, email was leaked from Sony in which co-chair of the company, Amy Pascal, tweeted ambiguously about “black babies” and jokingly suggested to someone who was about to meet Barack Obama that he ask him if he liked Django Unchained, a movie in which the black hero kills many white characters. To quell the ensuing public relations nightmare, Sony promised to give Rev. Sharpton a say in how movies are made.

Rev. Sharpton is celebrating the cancellation of Roseanne after the star character tweeted about black Obama confidant Valerie Jarett, and he says his organization “will continue to look into the hiring and business practices of all that shape public opinion in American culture.”

Rev. Sharpton enjoys many corporate sponsorships because of his ability to make trouble by accusing businesses of racism. As a 2015 report in the New York Post noted: “For more than a decade, corporations have shelled out thousands of dollars in donations and consulting fees to Sharpton’s National Action Network [NAN]. What they get in return is the reverend’s supposed sway in the black community or, more often, his silence.”

According to Ken Boehm, chairman of the National Legal & Policy Center, “Al Sharpton has enriched himself and NAN for years by threatening companies with bad publicity if they didn’t come to terms with him.” Mr. Boehm described Rev. Sharpton’s business as “shakedowns.”

The Post reported that Mr. Sharpton approached GM about donations beginning in 2000, but got nothing. However, in 2006, Mr. Sharpton picketed the company’s headquarters in New York, ostensibly to protest the closing of a black dealership. GM gave NAN $5,000 each year for the next two years.

Mr. Sharpton criticized Honda in 2003: “We cannot be silent while African-Americans spend hard-earned dollars with a company that does not hire, promote or do business with us in a statistically significant manner.” The Post suspects the protests stopped after Honda became a NAN sponsor. Major companies such as Coca-Cola, Time Warner, Ford, Google, Walmart, and others have donated to Mr. Sharpton in various forms, probably to avoid protests.

Despite these grants, Mr. Sharpton is consistently late in his personal and corporate taxes. In 1993, he pleaded guilty to failing to file an income tax return, which is a misdemeanor. National Review reported in 2015 that he owed New York State almost $596,000. According to a 2014 article in the New York Times, “Rev. Sharpton and the National Action network have repeatedly failed to pay travel agencies, hotels, and landlords.” In 2006 and 2007, Mr. Sharpton was sued by his landlord, Bishop E. Bernard Jordan, for failure to pay rent, though the result of the suit is unknown. In 2012, NAN was also in a dispute with its landlord, the Conference of Minority Transportation Officials, over allegedly more than $28,000 in past-due rent. According to the New York Times in 2014, Rev. Sharpton had $4.5 million in “current state and federal tax liens against him and his for-profit businesses.” It may be impossible to get detailed information about his finances since key financial records were destroyed by mysterious fires in 1997 and 2003.

This is the man whose endorsement Democratic presidential candidates vie for. In February 2016, both Bernie Sanders and Hillary Clinton met with the reverend to kiss his toe. Mrs. Clinton was effusive about him: “You stand up, and always have, [against] gun violence, advocate for criminal-justice reform, help young people find jobs, hold corporations accountable, and in a million ways lift up voices that too often go unheard.” Mr. Sharpton kept them both on the hop for months before finally endorsing Mrs. Clinton in August.

It is hard not to compare Mr. Sharpton’s career with that of Patrick Buchanan, who used to be a commentator for MSNBC. When the network’s president Phil Griffin fired Mr. Buchanan after the publication of his book Suicide of a Superpower, Mr. Griffin said that “the ideas he put forth aren’t really appropriate for national dialogue, much less the dialogue on MSNBC.”

MSNBC now promotes Al Sharpton as one of the nation’s top moral authorities. Let us be grateful. Every television appearance by the reverend is a reminder that the network is as much of a con as Mr. Sharpton.

Mr. Hood is a staff writer for American Renaissance. He has been active in conservative groups in the US. You can follow him on: Gab.
< Trump and the Invasion of the West
Overrepresentation of Indigenous People in Canada’s Prisons Persists Amid Drop in Overall Incarceration >
Blog
Commentary
Videos
Podcasts
Follow us