Basketball and the Foolishness of the Elites It is ironic that the meritocracy of elite sports is proof of anti-black systemic racism. Here is the percentage of blacks on the US Men’s Olympic Basketball teams, sampled every 20 years, from 1936 to 2016.

It’s clear that, statistically speaking,  blacks are good at basketball. In the sports meritocracy of the past 40 years or so, black players have been ultra-dominant in many sports, especially basketball. In the last 25 years, only three whites have represented the US in the Olympics in men’s basketball. This year, there is one white on the squad, and this has prompted accusations that he was chosen only to avoid sending an all-black team. Why were there so few blacks at the elite level 85 years ago?  The answer must be that there were obstacles to blacks participating, perhaps something that could legitimately be called systemic racism. Presumably, blacks had just as much potential then as now, so there must have been prejudiced coaches, fewer blacks who attended the universities that produced the best players, less access to sports equipment or good nutrition, or who knows what else. 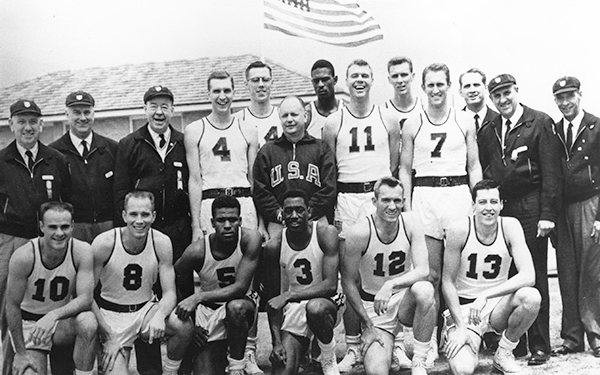 However, if there were racial barriers, they came down more than half a century ago. We have to go back to 1968 to find the last US Olympic team that was majority white. Meritocracy became the rule long ago. Or is there now “systemic racism” against whites, Hispanics and Asians?

You could try to make an argument for that. There are many inner-city and NGO programs to give young blacks basketball lessons and basketball leagues to try to keep them occupied lest they fall victim to the perils of inner cities. Once blacks reached a certain number, maybe they shut out people of any other race. I don’t think anyone believes that. But if, on average, blacks are “good at basketball,” there must be racial differences. And science tells us blacks have advantages in muscle mass and testosterone levels (see also here). Interestingly, it is old studies that find differences while new studies sometimes do not. It makes me wonder if science is being “corrected.” Certain African populations (the Maasai, for example) are tall, while Pygmies are short. Black dominance of elite basketball is surely something that is more than “skin deep.” This opens the door to skepticism about the endless government policies founded on the assumption that black under-representation is evidence of “systemic racism.” Blacks may be inherently “disadvantaged” in traits required for certain elite positions. If so, what should we do about it? Despite all the effort to get blacks into science, only 3.5 percent of engineering degrees went to blacks in 2014. This is considered an ongoing scandal. But if so, why don’t the equity-boosters rise up and insist that the Olympic basketball team be 60 percent white, 18 percent Hispanic, etc? That would be absurd, but the consequences would mean only that we would have a weaker team.

On the other hand, losing the international competition in medicine, science, engineering, leadership, and technology has a huge impact. We can’t afford a national “team” of affirmative-action incompetents. I look forward to the day when our “woke” leaders understand that racial balancing in elite sports would be just as crazy — and less damaging — than racial balance in science, medicine, and national leadership.