Will Ralph Northam Give Posthumous Pardons to Seven Black Rapists?

On January 8, 1949, a white woman named Ruby Stroud Floyd was raped in a black part of Martinsville, Virginia. At a hospital where she was examined for internal injuries, she told police that a group of black men raped her. Police soon arrested, Frank Hairston, Jr. and Booker Millner. Their confessions led to the arrest of five more blacks: Howard Hairston, James Hairston, John Taylor, Francis Grayson, and Joe Hampton. All seven were charged with rape and aiding and abetting rape, and all confessed at least to being present at the crime. At the time, rape and accessory to rape were punishable by death in Virginia, which is what prosecutors proposed for the “Martinsville Seven.” The six trials (two of the seven men were tried together) all returned guilty verdicts with death sentences. Four of the men were executed on February 2, 1951, and three on February 5. 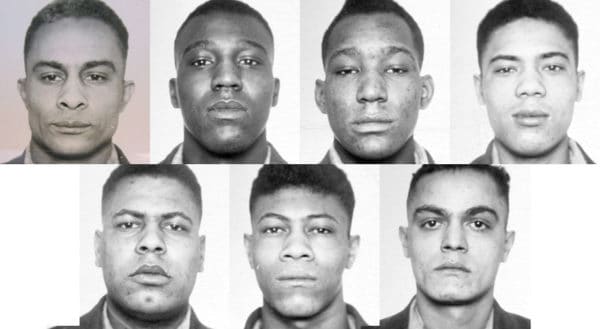 Now, activists are asking Virginia Governor Ralph Northam to posthumously pardon all seven of them — it would be the first posthumous pardon in state history. Unlike most requests for exoneration of any kind, this “petition does not argue that the men were innocent but contends that the rushed trials and extreme punishment defied any concept of justice.” (emphasis added) The argument is racial. Much is made of the fact that all the jurors in all the trials were white, and that before capital punishment for rape was ruled unconstitutional by the Supreme Court, more blacks were executed for rape than whites. The letter to Gov. Northam reads, in part:

Posthumously pardoning the Martinsville Seven would be a recognition of a fundamental truth that has plagued the history of the Commonwealth as well as the country as a whole, a point that you made after George Floyd’s murder: ‘George Floyd, Breonna Taylor, Ahmaud Arbery, and many others have been wrongfully killed, simply for being black. People all over our country are hurting and angry, and rightly so.’

The letter is also an appeal to empathy and guilt — two emotions that often seem to guide white liberals more than anything else. The black men who raped that white woman 71 years ago didn’t feel much of either. She was alone in their neighborhood, so they struck. Today, the petitioners (one of whom is a relative of one of the condemned men) are using a different strategy to get what they want. They are taking advantage of a complete reversal in the racial balance of power. As the French author Louis Veuillot ironically quipped, “When I am the weaker, I ask you for my freedom, because that is your principle; but when I am the stronger, I take away your freedom, because that is my principle.”

Chris Roberts is the Director of Special Projects at American Renaissance.
< Six Months After Mass Protests Began, What Is the Future of BLM?
Has America’s Suez Moment Come? >
Blog
Commentary
Videos
Podcasts
Follow us