How They Plan to Shut Us Up

The campaign to make what I say illegal.

The push is on — harder than ever — not just to ban people like me from Twitter and YouTube, but to make what we say illegal. Sheila Jackson-Lee, congresswoman from Texas for the last 28 years, has been fighting “racism” all her life — just ask her — and she was at it again last week. The Left has ignored it, but conservatives are paying attention. Breitbart News says the bill would criminalize “criticism of non-white people.” I’m sure the congresswoman would love to do that, but that’s not quite what her bill does.

It does invent a new category of hate crimes: those that are inspired by white supremacy. What’s white supremacy? We get this: “antagonism based on “replacement theory”, or “hate speech that vilifies or is otherwise directed against any non-White person or group.”

The bill says “hate speech,” but the Supreme Court does not recognize the existence of such a thing, so the new hate crime would be a crime inspired by speech — plain, old speech — directed against non-whites, or a crime motivated by resentment against white replacement. This is pretty broad. If I say “Sheila Jackson-Lee is a damn fool,” that’s speech directed against a non-white person. If I say, “I don’t want to become a minority” that’s resentment against replacement theory. If either of these sentiments motivate me to dump garbage on Shelia’s lawn — which is a crime — I’m guilty of a hate crime and therefore get added penalties. Crazy stuff.

If two or more people “conspire” to dump garbage on her lawn for either of these reasons, they are guilty of “conspiring” to commit a “white-supremacy-inspired hate crime.”

But what has conservatives angriest, is this: They think that if there are two people and one just talks about The Great Replacement or what an idiot Sheila is, and then the other dumps the garbage, they’re both guilty. They seem to think the talker could be guilty if all he did was post ideas on the internet, a stranger saw them, and completely independently dumped garbage.

I’m sure Sheila would like that, but the bill isn’t quite that simple. There has to be a “conspiracy” of some kind between the talker and the dumper. The talker may be completely opposed to dumping garbage, but he’s guilty only if there is a conspiracy.

So, what’s a conspiracy? That’s the spooky part, and we don’t even need this goofy new law to worry about that. You remember the Unite the Right rally in Charlottesville, Virginia in 2017. Police failed to separate racial dissidents from counter-protestors, and there were fisticuffs. The organizers and speakers at the rally were later sued under a Virginia law against conspiring to “commit racial, religious or ethnic harassment or violence.” The defendants didn’t think there was any evidence for a conspiracy, but as the presiding judge, Norman Moon explained, “a conspiracy is often clandestine and covert, thereby frequently resulting in little direct evidence of such an agreement.” He meant what he said. He told the jury that people don’t even have to know each other to be co-conspirators, and, sure enough, “The jury returned a verdict finding that Plaintiffs had proven . . . that each Defendant was a member of that conspiracy.”

Certainly, some of the defendants had planned the rally together, but not one had ever even heard of James Fields. And yet, they were guilty of having conspired with him. I guess this means that so long as people have some of the same ideas, they can conspire telepathically, so if you watch this video, agree with it, and dump garbage in Sheila’s yard, you and I could be co-conspirators. If that really were the law, I’d be out of business. I couldn’t run the risk that some nut who happens to agree with me on something does something illegal.

This is just like attempts to ban guns by not actually banning them: Make the manufacturers responsible if a criminal uses one to kill someone. That would put them out of business.

There are other approaches to shutting me up. This incident got nothing like the attention it deserved, but Kevin McAleenan, who was Acting Secretary of Homeland Security under Donald Trump, spoke at a seminar on “countering terrorism and targeted violence.” He said “violent white supremacy is an abhorrent affront to the nation,” and then added something hair-raising. He said the Trump administration was fighting that affront by “engagement with the private sector . . . , as Cloudflare did in the immediate aftermath of the El Paso attack, to make a decision to not support a website that’s become a cesspool of hate.”

Cloudflare is a company that protects internet sites against denial-of-service attacks, which are felonies. When Cloudflare stopped protecting the 8chan site, it disappeared. Mr. McAleenan thinks illegal internet attacks are fine if they are against sites he calls “cesspools of hate.” Mr. McAleenen went on: “That’s the kind of decision-making we want to see out there in the private sector.”

The First Amendment prevents the government from muzzling dissidents, so Mr. McAleenan can just tell the private sector to do it. If he thought my house was a “cesspool of hate,” would he ask the police to look the other way while antifa ransacked it? I don’t see any difference.

Of course, thanks to the Twitter Files, we know that government employees were routinely telling Twitter to censor people. They must have been doing that with Facebook and YouTube, too. It is illegal for the government to ask others to do what the First Amendment forbids it to do: censor people. The Wall Street Journal says you could “File a class action against federal agents seeking an injunction against social-media censorship efforts.”

But that, of course, assumes we still have a First Amendment, and the people who want to shut me up are chipping away at that.

The New York Times had it figured out back in 2019: “Free Speech is Killing Us.”

The author explains that, “brutality that germinates on the internet can leap into the world of flesh and blood.”

Yep, you could watch this video and dump garbage — or do something worse. The author adds that appealing to the First Amendment is “a cop-out.”

Senator Ben Cardin of Maryland is way ahead of him. He says, “if you espouse hate you’re not protected by the First Amendment.” He noted that Europe has hate speech laws, and “I think we have to learn from each other.” He’s wrong about the First Amendment — at least for now.

Senators say nutty things every day. It’s more serious when judges do. How about this: “Ninth Circuit Judge Urges Supreme Court ‘Not to Give Any First Amendment Protection for Racist Hate Speech’.” That, of course, happens in Europe all the time. I have been banned from Britain for the last eight years because what I say would be illegal there. And some Europeans are confident that we will learn from them.

Just this week at the World Economic Forum, there was a panel on “The Clear and Present Danger of Disinformation.” This lady is Věra Jourová, the European Commission vice president for “values and transparency.” She talked about “what qualifies as hate speech, as illegal hate speech, which you will have soon also in the U.S.” Arthur Sulzberger, publisher of the New York Times was also on the panel. Did he object? Not one bit. He said disinformation is an “existential” threat to society. Democrat Congressman Seth Moulton was also on the panel and agreed that Europeans are “way ahead of us” on regulation. 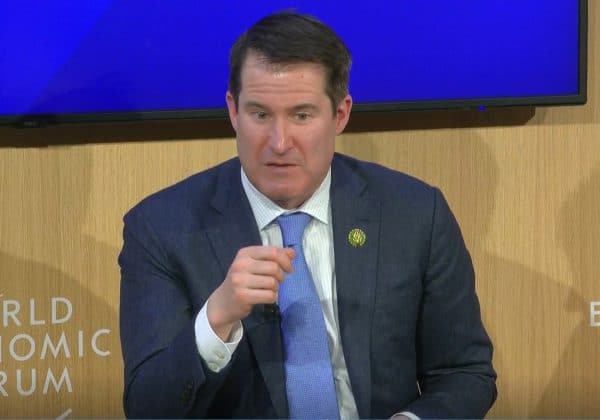 Barack Obama has it figured out. For him, “The internet is the single biggest threat to our democracy.”

Mr. Obama explained to Jeffrey Goldberg of the Atlantic “why he fears for of ‘our’ democracy.” There has to be a “combination of government regulation and corporate practice” to rein in the internet because, “If we do not have the capacity to distinguish what’s true from what’s false, then by definition the marketplace of ideas doesn’t work. And by definition our democracy doesn’t work.”

What he means is, if you can’t tell true from false. He and his pals in government can — easily — and they will make sure you don’t hear anything they think you shouldn’t.

But if the feds are going to say what’s right and what’s wrong, that pesky First Amendment’s got to take a haircut, and Harvard University Press explains why it should. This book, The Harm in Hate Speech, says that if you say things that undermine the “dignity” of “vulnerable minorities,” that is as bad as a physical assault and should be illegal.

This is a common view. A 2019 poll by the organization First Liberty found that 51 percent of Americans think the First Amendment should be rewritten to ban “hate speech.” Fifty-four percent of those who thought “hate speech” should be illegal said there should be possible jail time. The rest said a fine would be sufficient.

Eventually, it will be up to this lot. 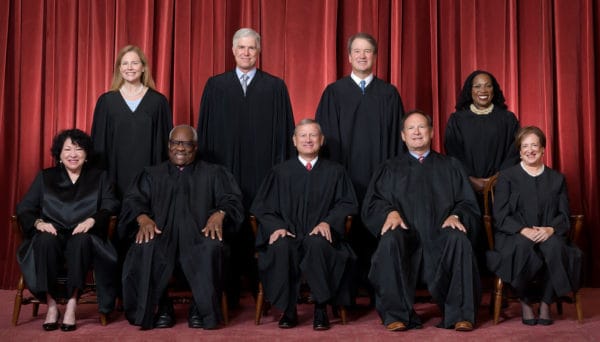 I have little doubt that Sonia Sotomayor, Elena Kagen, and Ketanji Brown Jackson would be happy to put me out of business, and I’m not sure about a some of the rest. But with just two more “progressives” on the bench, the First Amendment might be elastic enough to accommodate Sheila Jackson Lee’s crazy bill.

These are strange times. These are dangerous times. And partly, it’s because Elon Musk bought Twitter and believes in free speech. I used to think that even if Twitter and Facebook and YouTube and Instagram and TikTok all banned me — even if AmRen lost its website — I at least wouldn’t go to jail. Now, I’m not so sure. They used to call this place the land of the free and the home of the brave. That’s beginning to sound like a bad joke.

Jared Taylor is the editor of American Renaissance and the author of Paved With Good Intentions, White Identity, and If We Do Nothing.
< What If Diversity Trainings Are Doing More Harm Than Good?
Blog
Commentary
Videos
Podcasts
Follow us