Former Minneapolis Police Officer Derek Chauvin was sentenced to 22 years and 6 months in prison. The prosecution had asked for 30 years; the defense asked for time served plus probation. The maximum sentence for his conviction for second-degree murder would have been 40 years. The first victim impact statement was a video of George Floyd’s seven-year-old daughter, Gianna, being prompted to talk about her father. She said she thinks about her father and asks “how he got hurt.” Floyd was living in Minneapolis the whole time she was growing up in Houston, but she said she remembers him helping her brush her teeth.

Floyd’s nephew, Brandon Williams, read a prepared statement declaring that Mr. Chauvin had murdered his uncle “in a malicious and insidious display of hate and abuse of power,” although at no time during the trial was there any consideration of “hate.” “The full extent of our trauma goes beyond the naked eye,” he said, “Our family is forever broken.”

Terrence Floyd, George’s brother, was very emotional, and had trouble getting his words out. “We are part of a fraternity of families, and it’s not one of those fraternities you enjoy. . . I wanted to know from the man himself [Mr. Chauvin], why? What were you thinking? What was going through your head when you had your knee on my brother’s neck? When you knew that he posed no threat anymore, when he was handcuffed, why didn’t you at least get up? Why you stayed there?”

Terrence said that the hardest part of the case was having to tell his daughter what happened. He wanted the maximum sentence. “We don’t want to see more smacks on the wrist. . . because if it was us, it would be open and shut.”

Philonise Floyd, another of George Floyd’s brothers, said, “I was a trucker, and my life changed forever. I began to speak to the world for my brother – to the United Nations, Africa, Canada, Japan, and so many other countries.” He cried when he told the court that his niece needed closure and that his brother George would miss his daughter’s milestone moments. He also wanted the maximum sentence, adding that there should be no possibility of parole or release for good behavior. Prosecutor Matthew Frank said there were four aggravating factors he wanted the judge to use to increase the sentence beyond the 12-1/2 years that would have been normal for a first-time offense:

Mr. Frank accused Mr. Chauvin of “torture,” and said that he had: “traumatized Mr. Floyd’s family, the bystanders who watched Mr. Floyd die, and the community. And his conduct shocked the nation’s conscience.”

Derek Chauvin’s mother, Carolyn Pawlenty, spoke on behalf of the family. This was her first public appearance since George Floyd’s death.

Derek devoted 19 years of his life to the Minneapolis Police Department . . . .  It has been difficult for me to hear and read what the media, public, and prosecution believe Derek to be: an aggressive, heartless and uncaring person. I can tell you it’s far from the truth. My son’s identity had been reduced to that of a racist. I want this court to know that none of these things are true, and my son is a good man . . . .

Derek had played over and over in his head the events of that day.  I have seen the toll it has taken on him. . . . When you sentence my son, you will also sentence me. I will not be able to see Derek, talk to him on the phone or give him a hug. Plus, when he is released, it is likely that his father and I would not be here. Derek, my happiest moment was when I gave birth to you. And my second is when I was honored to pin your police badge on you. I remember you whispering to me, “Don’t stick me with it.”

Derek. I want you to know, I have always believed in your innocence and have never wavered from that. I have read numerous letters from people around the world that also believe in your innocence. No matter where you go, where you are, I will always be there to visit you. . . . I will do what you told me to do, take care of myself, so I will be here when you come home.

The only time Derek Chauvin showed any emotion during the whole trial and sentencing was when his mother spoke.

Mr. Nelson reminded the judge that “Justice is blind.”

He also said that since he began representing Derek Chauvin, he has received more than 5,000 email and more than 1,000 voicemails messages, and hundreds of hand-written letters, representing opinions from both sides. He praised Mr. Chauvin’s 19 years as a police officer:

He was decorated with multiple live-saving awards and was decorated for valor. He served his country in the US Army. He too, is a son, a brother, a father, and a friend. He is not coming into this as a career criminal.  He is coming into this having never violated the law. He intended to live an honorable life.

Derek Chauvin was not even scheduled to work on May 25, 2020. He volunteered because there was short staffing. I know from numerous conversations with Derek that his brain is littered with What-Ifs. What if I had just chosen not to go in that day?  What if things had just gone differently? . . .

The court should focus not just on the aggravating factors, but on the mitigating factors as well.

Derek Chauvin did not take the stand during his trial, but he did speak haltingly during the sentencing, making a mysterious reference to his appeal. “Due to legal matters at hand,” he said, “I am not able to give a full formal statement at this time. I want to give full condolences to the Floyd family. There is going to be some other information in the future that would be of interest, and I hope things will give you some peace of mind. Thank you.”

Judge Peter Cahill took a break before announcing the sentence, but it was clear that he had already made up his mind. He said that he did not want to “be profound on the record,” and had prepared a 22-page memorandum that he attached to the sentencing order, saying, “I prefer that you read the legal analysis that explains how I determined the sentence of the case.” He added that his sentencing decision was not based on emotion or sympathy, nor was he trying to send a message. 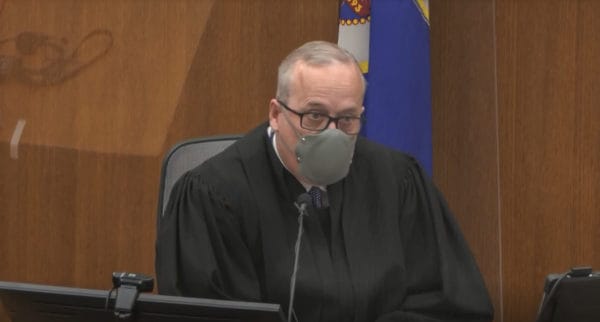 Judge Cahill added 10 years to the state’s sentencing guidelines, which call for 12-1/2 years for a first-time offender. He said the aggravating factors were “particular cruelty” and “abuse of power.”

Judge Cahill wrote in the memorandum that the trial proved all four aggravating factors claimed by the prosecution beyond a reasonable doubt, and that concluded that the aggravating factors show that what Mr. Chauvin did was much more serious than that “typically involved in the commission of such an offense.”

The request for probation was inappropriate because:

The judge wrote that the aggravating factor of “abuse of position of trust or authority” weighed heavily in his decision, because “the defendant and victim are in a relationship fraught with power imbalances that may make it difficult for a victim to protect himself.”

Judge Cahill wrote that Mr. Chauvin had abused his authority by pinning Floyd down in a position that, according to police training, could cause “positional asphyxia,” and because Mr. Chauvin continued holding Floyd down after he had stopped talking and become unresponsive.

He wrote that Mr. Chauvin abused his authority by not giving first aid after two suggestions to do so from another officer, and by preventing an off-duty firefighter from giving aid. Judge Cahill said that Mr. Chauvin’s failure to render aid became “particularly abusive” after Floyd passed out, and another officer said that he could not find a pulse.

Judge Cahill wrote that it was “particularly cruel” to kill George Floyd slowly, by making it hard for Floyd to breathe, especially after Floyd had said he couldn’t breathe. The “prolonged use” of the prone restraint was “particularly egregious” because Floyd “expressed the view that he was dying.”

Judge Cahill said Mr. Chauvin was “indifferent” while George Floyd was “begging for his life,” and that restraining Floyd against the hard street with a knee to the neck and back for nine minutes while holding his handcuffed arms was “by itself a particularly cruel act.” He wrote that Mr. Chauvin had inflicted gratuitous pain.

He added that “Mr. Chauvin’s prolonged restraint of Mr. Floyd was also much longer and more painful than the typical scenario in a second-degree or third-degree murder or second-degree manslaughter case.”

The judge said Floyd’s death was more painful than instant death by gunshot. Mr. Chauvin’s argument against “particular cruelty” was that death had occurred over a short period of time, but the judge said it was a “slow” death.

Another defense argument against “particularly cruelty” was that Mr. Chauvin’s actions involved no threats or taunting, but Judge Cahill wrote that Mr. Chauvin did taunt Floyd by dismissing his pleas, with “uh huh,” and telling Floyd, “It takes a heck of a lot of oxygen to say things,” when Floyd said he could not breathe.

Judge Cahill wrote that the presence of children did not require an increased sentence. “[T]hese young women were free to leave the scene whenever they wished, were never coerced or forced by him or any of the other officers to remain a captive presence at the scene.”

The judge also declined to increase the sentence based on the fact that Mr. Chauvin had committed the offense as part of a group of four officers. A sentence can be lengthened if the defendant committed the crime with other “offenders.” The judge found that the other officers – Thomas Lane, Alexander Kueng, and Tou Thao did not have the requisite knowledge and intent to be considered “offenders.” The trial of those three police officers will begin March 8, 2022.

Mr. Chauvin will probably not be eligible for release on parole until 2035 or 2036, when he will be nearly 60 years old. He is being kept in solitary confinement for his own safety. One of the arguments his lawyer made for release and parole was that other prisoners would attack him.

Anastasia Katz is an American writer.
< How I Became a White Separatist
The Mind of the White Man >
Blog
Commentary
Videos
Podcasts
Follow us