Critics of Controversial US Voting Machines Accused of Election Interference 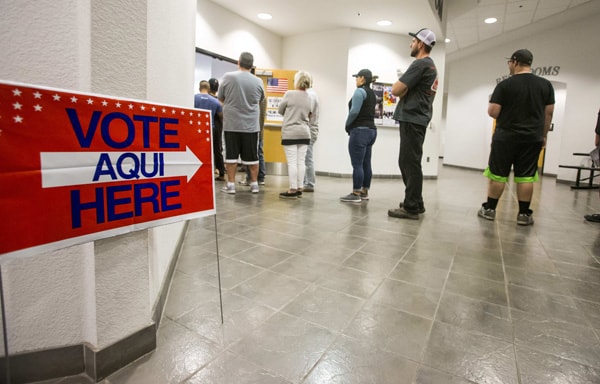 Georgia has become infamous for election security breaches in the past few years. But in a somewhat ironic twist, Georgia secretary of state’s office has now decided to investigate allegations that three vocal critics of the state’s controversial new voting machines interfered at a polling place during this year’s 5 November election.

The investigation, opened on 5 November, occurred after the office received notifications about election integrity advocates Rhonda Martin; Marilyn Marks, executive director of the Coalition for Good Governance, a not-for-profit that’s one of the plaintiffs in an ongoing lawsuit⁠ over the state’s voting machines; and Richard DeMillo, a Georgia Tech computing professor and cybersecurity expert.

The complaint – which the secretary of state’s office initiated after hearing from “more than one person”, says office spokesman Walter Jones – states that the three were observed “inside the enclosed space, without authorization, at a Paulding county polling location” for more than an hour and a half.

There is usually about six feet of “enclosed space” around the voting booth in which no one except for the voter and poll workers are allowed to go, according to Georgia’s state code. However, people can legally observe voting, and electronic voting machines should be arranged in such a way to secure the voter’s privacy but allow observation by poll workers and public observers.

DeMillo, who was at the polling location to research the effectiveness of the new machines, says he has not been contacted by the state to know exactly what he’s accused of, but denies breaking state law. He said he followed all standard regulations – “I introduce[d] myself to the poll manager, told them, ‘I’m not associated with any political party, and I’m here for the public to observe the election. Where can I stand to do that?’” – and was escorted by the poll manager to where he was supposed to be, including to the room containing the new voting machines.

“I’m sure the secretary of state’s office knows that I’m likely to be called as a witness in front of the federal court. And I think they’re getting very close to the line of witness intimidation,” DeMillo said.

This comes at a time when Georgia, which faced voter suppression and insufficient election security during the 2018 gubernatorial election, is striving to restore faith in its elections processes. Over the summer, the secretary of state’s office awarded a $107m contract to Dominion Voting to replace 17-year-old paperless voting machines with new electronic machines that use touchscreens and then print paper ballots, which voters can review before scanning and submitting. The state is under a court order to roll out its new voting system before the presidential primary in March, or be forced to used hand-filled paper ballots.

Georgia rolled out its new machines at a handful of polling locations on 5 November , including in Paulding county where the complaint allegedly occurred. But DeMillo and Marks advocate for using only handmarked paper ballots.

“Computers are hackable; computers can be misconfigured; computers make errors. Each of those is a bad thing for an election,” DeMillo says. “Paper ballots are heavy and cumbersome, and you’ve got to have the right number of ballots printed – but they can’t be hacked.”

Meanwhile, Jones said the secretary of state’s office is still investigating the complaints; once completed, investigators will present their findings to the state elections board, which could dismiss it, send a cease-and-desist to the defendants, hold a hearing, or, if determined to be a crime, refer it to the attorney general’s office for prosecution.

“Clearly, they’re trying to discredit us,” said Marks, who also denies being inside the enclosed space or taking photographs – another violation of state code. “It is just really disappointing, given all the problems of this election and this pilot, that the way the secretary of state is dealing with these problems is to try and shoot the messenger.”