The Left Is Creating a Class That May Overthrow It 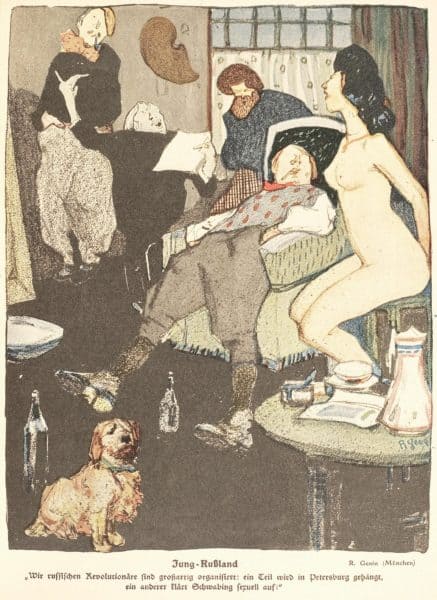 For almost a century, sociologists have described how societies with large numbers of “unemployed intellectuals” are a danger to the governments and cultures of which they are a part. The theory is that any country with a large group of bright, knowledgeable people who feel alienated from and can’t join the mainstream will have a strong counter culture. Some may turn against the regime. Here is an example from China:

The ferocious rebellions led by Huang Ch’ao in the late Tang Dynasty, and its successors in the tenth century, the rebellions in the middle period of the Northern Sung and in the later Ming, and, not least, Taiping Rebellion of the nineteenth century drew some of their leadership and bitterness from men who had taken the examinations and failed to gain the desired degrees. These were ‘unemployed intellectuals’ trained in the Confucian classics and then made into ‘superfluous men’. They were the first ‘unemployed intellectuals’ who turned into [sic] the revolutionary path. Karl Marx thought that a certain socialist movement of which he disapproved drew its support from lawyers without briefs, physicians without patients, students who specialized in billiards. — from The Political Responsibility of Intellectuals, edited by Ian MacLean, Alan Montefiore, and Peter Winch

This is especially true in affluent and democratic societies. Most revolutionary currents in the post-1945 West can be traced to disaffected and unemployed/under-employed people with college degrees — not “workers” or “peasants.” George Orwell wrote about British Communists in the 1940s:

. . . they are not managers in the narrow sense, but scientists, technicians, teachers, journalists, broadcasters, bureaucrats, professional politicians: in general, middling people who feel themselves cramped by a system that is still partly aristocratic, and are hungry for more power and more prestige. These people look towards the USSR and see in it, or think they see, a system which eliminates the upper class, keeps the working class in its place, and hands unlimited power to people very similar to themselves. It was only after the Soviet régime became unmistakably totalitarian that English intellectuals, in large numbers, began to show an interest in it. . . . [They] wish to destroy the old, equalitarian version of Socialism and usher in a hierarchical society where the intellectual can at last get his hands on the whip.

This psychology is present within America’s liberal elite. College administrators, “anti-racist” activists, woke journalists, and HR bureaucrats are all educated people who don’t make much money but who can wield power over others — often, others who may have a superior social status to theirs — by accusing them of “racism” and having them fired or humiliated. Class envy is certainly part of this, but there is also a pathological side to it. Political commentator Angela Nagle discussed this in a recent podcast:

[T]here is a small but may as well be large, like dominant, group of people, on the radical left who have a very powerful desire to desecrate things. They have a very powerful desire to destroy anything that is good for society, that is joyful, that is pro-social. that is beautiful. . . They do have a genuine spiteful, we talked about this a little the last time, a very very intense spiteful drive to destroy . . . all that is good, basically. And, to a normal person, to a person with any kind of normal psychology, you don’t really believe that, because you think, “Why would somebody want that? That doesn’t make any sense.” But they really do, and they feel it really powerfully, it’s like somebody who wants to slash a beautiful woman’s face or something.

These people will exist for as long as America has a large university system that teaches students to despise America for its supposed “racism” and “sexism,” while awarding them useless degrees for parroting these ideas — even as they accumulate crushing tuition debt. It is that bitter and hateful class that fuels both the political left and our hostile elite in their push for censorship, reparations, more race-preference laws, open borders, and contempt for white America.

It is also this class that is creating unemployed/under-employed intellectuals. “Canceling” people (firing them, socially ostracizing them, or both) for even small departures from political correctness is more and more common. The “canceled” are beginning to reach out to each other and create supportive groups. In November 2019, The New York Times described this trend in an article called “Those People We Tried to Cancel? They’re All Hanging Out Together.” The number of publications whose purpose, to some degree, is to fight cancel culture is steadily growing, the most famous being Quillette and The Rubin Report. The growing popularity of podcasts is also due in part to cancel culture. Heterodox leftists can post their recordings to SoundCloud or similar websites and develop a following free from any publication or political party’s oversight. They have increased motivation to do this. It is not hard to find leftists admitting that on the Left, you are constantly fighting with other leftists and worrying about your job. Here is Lee Fang talking about it in February, only a few months before spurious accusations of racism nearly cost him his job:

More and more people, many of them bright, and the majority of them on the Left (the Left “purges” dissent from its own ranks more than anywhere else), are joining “talented but canceled” thinkers, academics, and journalists. Speaking on the same podcast as Angela Nagle, another political theorist with no place to call home said:

The big thing with the Left in general, is that to survive inside it, and we all have experience with that to various degrees. But you sort of have to; you pick up on these social rules and the social cues and you sort of live with that. So, this week you’re supposed to talk about this issue, or else you’ll get canceled. Next week you’re supposed to talk about the other issue, and if you have any sort of historical memory or if you expect any sort of consistency, you’re in deep water, my friend. . . and my experience with that sort of thing is that, the normies, they just can’t hack it. They take one look at this and go, “Well I never joined this cult. This is just stupid.” And so, there’s this huge gulf of understanding between leftists and .  . . everyone else, that hampers them really, really badly. And sends them towards really overestimating their own base of support and how far they can go before people get really fucking tired of them.

The ranks of the “really fucking tired” are growing, and the people who are making them feel that way are not letting up. This means, ironically, that as more and more people find themselves canceled, the US is creating a bitter new class of “unemployed intellectuals” who resent their inability to get ahead because of the taboos and power structures created by the last wave of unemployed intellectuals. The “woke liberalism” we see so much of today is unstable because it insists on making increasing numbers of talented people unemployed and socially isolated — which is the very thing that most threatens an established order.

These people may not (yet) be our friends, but they are becoming the enemies of our enemies.