Is President Trump a Racist?

American culture traditionally praises actions over words: “Actions speak louder than words,” “He only talks a good game,” and perhaps most colorfully, “He’s all hat, and no cattle.” It’s hard to imagine anyone being praised for stellar rhetoric while doing nothing. Surely, accomplishing something while speaking poorly is preferable to the reverse.

Nevertheless, American politics is now witnessing a phenomenon that violates this principle: President Donald Trump is excoriated for saying racist “bad things” while economically helping blacks and other minorities. Indeed, it seems that the greater the benefits for blacks under his administration, the more vehement the cries of racism. Why, and is this reversible?

Here’s a sample of these accusations.

A January 15, 2018 New York Times story — “Donald Trump’s Racism: The Definitive List” — reviews a half century beginning with Trump the businessman to make the racism case. The account starts by noting that, according to the federal government, he avoided renting apartments to blacks and favored whites. He also, supposedly, said blacks are lazy. In 1989, he took out ads in New York newspapers demanding the death penalty for five black and Latino teenagers accused of raping a white jogger in Central Park (all were later found innocent). On NBC, he said he would love to be a well-educated black given all the advantages they enjoy. Then there’s his disparagement of Hispanic immigrants and efforts to stop Muslim immigration, all while saying that 15,000 immigrants from Haiti all have AIDS and if 40,000 Nigerians ever saw the United States, they would never return to their huts. He called for less immigration from Haiti and more from Norway, and said Mr. Obama was unqualified, lazy, and un-American.

Mr. Trump has also called largely black American cities “dystopian war zones” where you get shot just walking down the street, and has circulated crime statistics that exaggerate black crime. After Hurricane Marie devastated Puerto Rico, he called Puerto Ricans who criticized his administration politically motivated ingrates. Finally, he said that some of the people at the Unite the Right rally in Charlottesville were “very fine people,” and when former KKK leader David Duke praised him, he was slow to disavow the endorsement.

Similarly a recent Washington Post story began with the headline, “With racist ad, Trump sinks to a new low,” and condemns the president for running an ad warning about the criminal behavior of illegal immigrants. The ad was about a previously deported Mexican who came back to California and killed two police officers. The Post writer was hardly subtle: “Trump is the most racist president in modern history, not because of what is or isn’t in his heart but because of the despicable way he has acted. There is little doubt that there is no depth to which he will not sink.”

The most recent example of racism is particularly bizarre: President Trump’s choices for awarding the Presidential Medal of Freedom. One of the seven was Elvis Presley, the “king of rock and roll” (another was the black football player Alan Page). Chris Richards, the pop culture critic of the Washington Post, called the Presley award “racist,” claiming it was “a little nod to the good old days, back when black visionaries could invent rock-and-roll, but only a white man could become the king.” According to Mr. Richards, the president obviously knows that Elvis “stole” rock and roll from black musicians so this honor is bogus and racist. 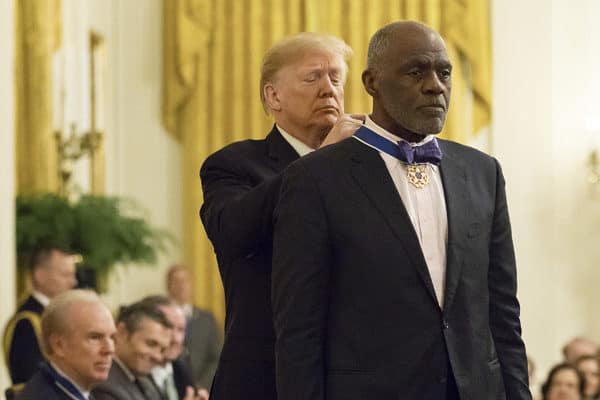 If you disregard statements likely to be true (e.g., high black crime) and those that have nothing to do with race (e.g., the Elvis Freedom medal), you are left with perhaps one utterance per year, hardly an outrageous racist record. This is not smoking-gun proof that Mr. Trump is the most racist President in recent history, or that he’s particularly prejudiced. A Newsweek story repeated some of these claims and added a few more. Examples: He called Afghanistan a “terrorist haven” and said that many black ghetto dwellers were “living in hell.” But mostly Newsweek repeats the same ambiguous catalog, as if retelling a list of a dozen items ten times expands the number to 120.

Plenty of presidents have mocked blacks. President Lyndon Johnson called civil rights bills “n***er bills,” and when he appointed Thurgood Marshall to the Supreme Court, he reportedly said, “Son, when I appoint a n***er to the court, I want everyone to know he’s a n***er.” President Nixon knew about race and IQ, and said rude things about blacks. When his wife was running against Barack Obama for the Democratic nomination, Bill Clinton reportedly said, “A few years ago, this guy would have been getting us coffee.”

Why all these attacks on Donald Trump? The simplest explanation is that “racist” has become the harshest term of opprobrium, comparable to atheist in 16th century Europe, blasphemer among pious Muslims, or “pinko homo” during 1950s McCarthyism. Also, the accusation requires few facts, unlike claiming that Mr. Trump’s economic or regulatory policies have failed. The media hate Mr. Trump, and calling him a racist is a gratifying way to express that hatred.

Furthermore, there is no universally accepted meaning of “racism,” so one can be a racist unconsciously, accidentally, or without doing anything — as in perpetrating “structural racism.” Even praising blacks might be “racist” if a single black person thinks the praise is patronizing. There is no way to prove innocence.

Racism is like obscenity — I can’t define it, but I know it when I see it. Accusers can therefore claim to have seen through Mr. Trump’s “dog whistle” racism, and ignore all denials or evidence to the contrary. No one offers solid evidence — just ambiguous statements — and to ask for evidence would, in turn, be racist. By now, of course, “everybody knows” that Mr. Trump is a racist, so vilifying him benefits the accuser by demonstrating a commitment to black rights.

Another complication for Mr. Trump is that fact that his accomplishments for blacks are not specifically racial. Unlike Mr. Obama, whose flashy gestures included appointing two black attorneys general, Trump’s pro-black policies apply universally. For example, he has helped create millions of industrial jobs, many of which are filled by blacks. Cutting anti-business regulations or increasing the US domestic energy supply is never categorized as “pro-black,” but their impact certainly is because they contribute to a booming, job-rich economy. Curtailing illegal immigration likewise frees up jobs for once-unemployed blacks, even though many of Mr. Trump’s detractors say this is proof of his “racism.” It is hardly surprising that many black leaders fail to link pro-business with pro-black, let alone understand how strangling the Golden Goose with countless anti-discriminatory regulations may eventually hurt ordinary blacks.

Lastly, Mr. Trump’s unwillingness to play the rhetorical pandering game favored by race hustlers makes him a “racist.” He refuses to stand shoulder-to-shoulder with Al Sharpton before the NAACP, denouncing white supremacy. This is empty showmanship, of course, but black audiences love it. Pandering is the perfect get-out-of-jail-free card for those who fear accusations of racism.

“Racism” charges have stuck, even if Mr. Trump were to refute every one of them and behave more “presidential.” These accusations hardly disturb hardcore supporters, but the damage among moderate Republicans is great. They are the well-educated, affluent folk who disproportionately live in all-white enclaves, send their children to segregated schools, and otherwise live apart from blacks. Alas, their religion is diversity, and it demands a steadfast rejection of anything — however far-fetched — that hints of “racism.” Alluding to black/white differences in crime, welfare, or especially intelligence is taboo, and this leads to opposition to the president. It is irrelevant that his economic policies may help blacks; “racism” discredits even the best economic policies.

Is it possible to have a Trump-like presidential candidate without Trump’s rough edges — a “Trump-lite?” He might kowtow to the NAACP once every four years while rolling back the racial spoils system. He could sharply reduce Hispanic migration by highlighting how Chinese and Indian immigrants — all people of color — improve the economy. Of course, he would quote Dr. Martin Luther King, Jr. as often as possible. There would be photo-ops with ex-gang members taking jobs in reopened steel mills in Gary, Indiana. And there could always be a black vice president as proof of being 100 percent free of racism.

This might be possible if today’s fervent Trump voters would accept a Trump-lite, but since the Left, with the help of the media, has now made such a fetish of racism, no GOP candidate is immune. Democrats would discover that this Messiah read The Bell Curve in college, had his picture taken next to a statue of Robert E. Lee during an 8th grade class trip, or got campaign contributions from members of a white country club. The possibilities of racist sin are endless.

We now live in an era of racist hysteria. For the time being, the hysteria is mainly directed at Republicans, but as the Left goes even more hysterical, Democrats will be targets, too. Increasingly, just being white is a crime, no matter what your politics are.

The massive race-related social engineering that began with the Great Society has not brought equality. Anyone who criticizes these hugely expensive public failures must be silenced, and Mr. Trump is a wild man who might say anything. There is no telling what truths he might blurt out. To update an old proverb, in the land of the blind, the one-eyed man is guilty of ableism and must be blinded.