BLM, Antifa Activists Convicted of Arson After Attempting to Frame Proud Boys for Their Own Crimes

A group of Black Lives Matter and Antifa rioters were convicted on federal charges after attempting to frame the Proud Boys for a series of vandalism and arson attacks the far-left extremists carried out on Atlanta police vehicles and United States Postal Service property during the lead up to the 2020 presidential election.

John Wesley Wade, 35, Ellie Melvin Brett, 37, and Vida Jones, 19, were arrested in late October 2020 on federal charges in connection to the string of incidents. 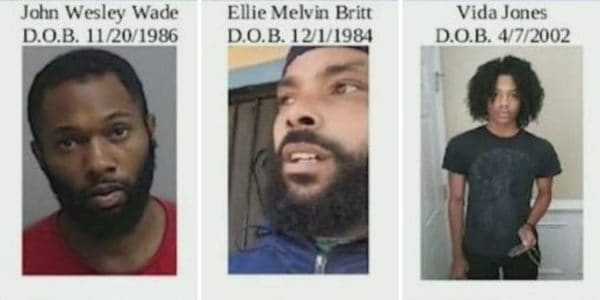 The suspects tried to frame the Proud Boys by leaving notes near the sites of vandalism that read “Stand By,” a reference to when former President Donald Trump told the right-wing group to “stand back and stand by” after he was asked to condemn white supremacist militias during the first 2020 presidential debate.

At around 12:50 am on Oct. 2, 2020, several fires were set at the West End Post Office located at 848 Oglethorpe Avenue. One fire was set within a bin of mail on the loading dock of the Post Office building itself, destroying much of the mail and damaging other property in the possession of the US Postal Service. The other fires damaged five USPS vehicles that were parked in the secure, enclosed parking area.

The attack was one of at least seven related arson and vandalism incidents directed at law enforcement, a bank, and other government entities that occurred around the Atlanta metropolitan area between Sept. 30, 2020, and Oct. 2, 2020.

At around 10:49 pm on Sept. 30, 2020, in the parking lot of a Walmart located at 835 M.L.K. Jr. Drive, the window of an Atlanta Police Department (APD) patrol vehicle was smashed with a brick with a note wrapped around it.

Law enforcement recovered the brick and note from the scene. The note mentioned Election Day and the date the Electoral College was to meet.

The note also included the phrase “stand by.” The note’s contents were similar to messaging depicted on an Instagram account (@nofaithlesselector) associated with Brett. According to the Oct. 27, 2020, criminal complaint, in one Instagram video, Brett, wearing the same two-tone jacket, stated: “Proud boys stand by.”

At approximately 11:46 pm on Sept. 30, 2020, about an hour after the first incident, another brick with a note attached was thrown through the window of a Wells Fargo Bank at 240 Peachtree Street in Atlanta. The note on the brick referenced the Electoral College and again included the phrase “stand by.” {snip}

At around 1:33 am on Oct. 1, 2020, shortly after the second incident, the window of another marked APD vehicle parked outside a residence was smashed with a brick. The vandalism was a few blocks from the first incident. No note was left.

After the three brick incidents, the incidents escalated to include arsons the next night. The suspects filmed the fires and posted the videos to social media.

Within two hours after the fourth incident, several fires were set at the West End Post Office residing on Oglethorpe Avenue. The multiple fires damaged five USPS vehicles and destroyed mail in a bin on the post office’s loading dock.

At about 2:30 am on Oct. 2, 2020, fire was also set to damage two East Point Public Works Department vehicles parked in a City of East Point parking area near 1659 Linwood Avenue and McGee Way in East Point, Georgia.

One of the vehicles, law enforcement recovered a brick that had been smashed through one of the car’s windows. A note was found on the ground near one of the vehicles. In the top right corner of the note was a list of states next to their number of electoral votes. {snip}

Then around 3:11 am on Oct. 2, 2020, within an hour of the sixth incident, a MARTA Police vehicle was vandalized and set on fire at the West End MARTA station {snip}

The Fulton County District Attorney had announced back in January that Wade and two other suspects were indicted for setting fire to the Wendy’s restaurant located on University Avenue in southwest Atlanta on June 13, 2020.