These charges were based on the autopsy performed by the Hennepin County Medical Examiner’s Office and a private “re-autopsy” performed at the request of the Floyd family’s attorney. Based on those procedures, the medical examiner issued a revised autopsy report stating that Floyd had died of “cardiopulmonary arrest complicating law enforcement subdual, restraint and neck compression.” In short, Floyd’s death was allegedly caused by the manner in which the police had restrained him.

Then, on May 31, 2020, NMS Labs forwarded Floyd’s toxicology report to the Hennepin County Medical Examiners’ Office. 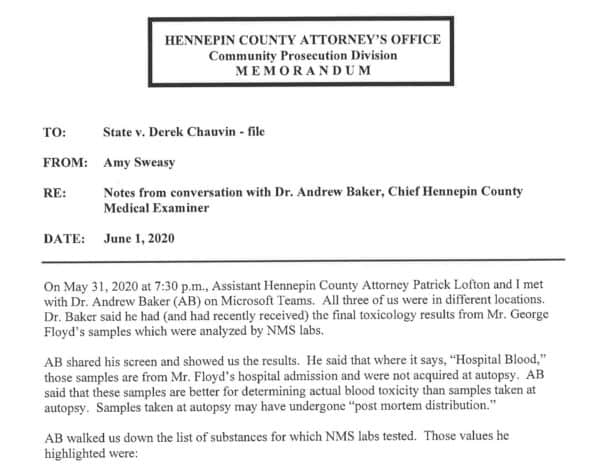 {snip} Dr. Baker, the chief medical examiner, had to concede that at 11 ng/mL, Floyd had “a fatal level of fentanyl under normal circumstances.” He also conceded that the fentanyl overdose “can cause pulmonary edema,” a frothy fluid build-up in the lungs that was evidenced by the finding at autopsy that Floyd’s lungs weighed two to three times normal weight.

This is consistent with Officer Kueng’s observation at the scene that Floyd was foaming at the mouth and, as found at autopsy, that his lungs were “diffusely congested and edematous.”

In other words, like a drowned man, Floyd’s lungs were filled with fluid. And that was the obvious and inescapable reason why Floyd kept shouting over and over again that he couldn’t breathe even when he was upright and mobile.

The memorandum ends with Dr. Baker’s devastating conclusion that “if Floyd had been found dead in his home (or anywhere else) and there were no other contributing factors he [Dr. Baker] would conclude that it was an overdose death.”