Ralph Northam, Virginia Governor, Admits He Was in Photo Showing Men in Blackface and K.K.K. Attire

Virginia’s governor acknowledged on Friday that he was photographed more than 30 years ago in a costume that was “clearly racist and offensive” — admitting that he had dressed either as a member of the Ku Klux Klan or in blackface — but resisted calls for his resignation.

“I am deeply sorry for the decision I made to appear as I did in this photo and for the hurt that decision caused then and now,” the governor, Ralph Northam, said in a statement on Friday evening. “This behavior is not in keeping with who I am today and the values I have fought for throughout my career in the military, in medicine, and in public service. But I want to be clear, I understand how this decision shakes Virginians’ faith in that commitment.”

Dr. Northam issued his statement hours after the photograph, which was included on his 1984 medical school yearbook page and appeared alongside other pictures of Dr. Northam, became public. 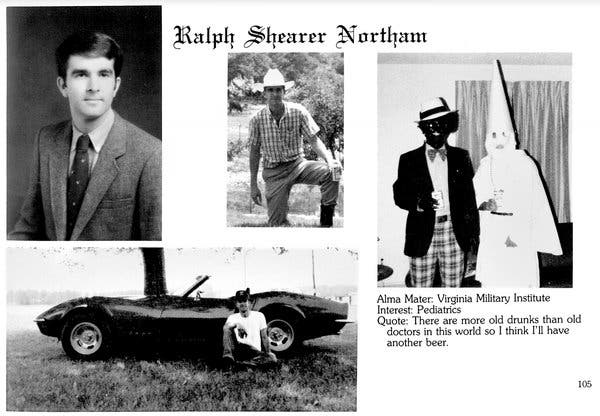 Jared Taylor is the editor of American Renaissance and the author of Paved With Good Intentions, White Identity, and If We Do Nothing.
< Elizabeth Warren Apologizes to Cherokee Nation for Taking DNA Test to Prove Native-American Roots
New Dem Presidential Candidate Calls for ‘Spiritual Awakening’ in US >
Blog
Commentary
Videos
Podcasts
Follow us