Every year thousands board rickety boats, hide in the backs of trucks, planes, and container ships, cross miles of barren desert on foot . . . All to get themselves to a land where they can be ruled by a racial group far distant from their own.

They cross the Mediterranean by the hundreds, many dying en route. Not to get to Italy–that’s only phase one–but to the real Eldorado: Northern Europe.

Calais, in the north of France, is now home to a tent encampment of several thousand third-world migrants. Are they content to have made it to one of the richest countries on the planet? They are not. Each day they lie in wait trying to jump in the backs of trucks embarking the Channel ferry for the promised land: the U.K.

Boats of fortune leave regularly from Sri Lanka and Indonesia, full to cracking with Pakistanis, Lebanese, Somalis. . . Though these Asian and African ‘refugees’ are surrounded by dozens of safe countries which could take them in, they’d rather risk death on the open sea in hopes of reaching a land run by . . . Anglos. Why?

Gallup recently polled the citizens of Planet Earth, asking 1) Would you like to migrate abroad? and 2) If so, where?

They have concluded that three-quarters of a billion people would, in fact, like to leave their home country. 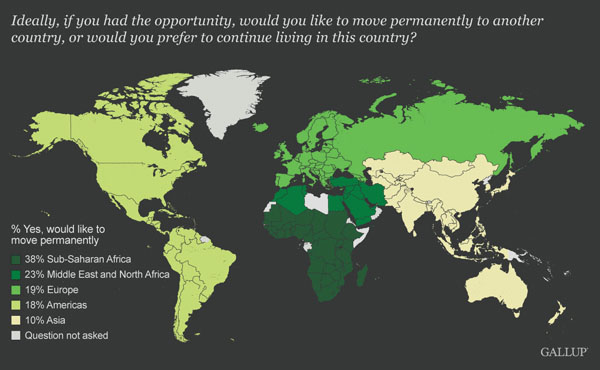 From this Gallup was able to cook up a Potential Net Migration Index: If everyone in the world could magically land in his country of choice tomorrow, Singapore’s population would rise by 219%. Zimbabwe’s would fall by 47%. The top 20 destinations, according to this measure: Thirteen of these twenty, one may have noticed, have a little something in common.

While it’s not clear what mix of genes / language / culture has permeated the Germanic space, we have to draw lines somewhere. We consider ‘Teutonic’ all the descendents of NW European Germanic language speakers, including all of the British Isles and their offspring-states, Scandinavia (with Finland), Germany, Austria, and Benelux. (We do not include South Africa, as even though it was built and maintained by Teutons, the reins of power have now been passed to others.)

Though we are always told that the global ‘South’ wants to migrate to the ‘North,’ the reality is more nuanced. Hundreds of millions of people from the third world would like very much to live under the rule of a Teutonic people. Why is this so? We shall turn to the indicators to try to understand.

I. RULE OF LAW

Transparency International regularly polls the world on how corrupt they perceive their countries to be: The World Economic Forum’s annual Competitivity Report is a wealth of world-wide indicators, based on polling of businesspeople. Out of 139 countries surveyed, here are some of the ‘top 20’s: On many corruption/rule of law measures, then, the Teutonics seem to stand out from the crowd. What about barometers of societal trust?

The biggest cross-cultural values poll in existence, the World Values Survey, asks if ‘people can generally be trusted.’ Delhey et al. as well as Bomhoff and Yean noted that by ‘people’ some ethnies mean ‘the people in my immediate circle’ and others mean ‘people in society.’ Bomhoff and Yean have thus re-normed the data by aggregating with a series of other trust-related queries. The results: Having considered Rule of Law and Trust, let us examine one of NW Euros’ most salient traits–their egalitarianism.

The Economist Intelligence Unit publishes a yearly ‘Democracy Index,’ which we believe can in part be interpreted as a measure of egalitarianism in one’s society (as seen in contrast to authoritarianism). Egalitarian feeling can also be gauged in a country’s corporate culture. How frequently do upper managers delegate tasks to their underlings? Out of 139 nations surveyed by World Economic Forum, here are the top 20: ‘Consensual’ cultures also tend to display high levels of cooperation between unions and management. (Strike-loving France, for the record, comes in at #129 on this list.) The top 20, according to polls: Analysts bicker endlessly about the sources of first-world wealth: Geography? Culture? Exploitation? Luck of the draw? Whatever these sources may be, Teutonics, wherever they are found, tend to enjoy them in abundance.

Though it is rickety as a real measure of a people’s wealth-creating potential (sitting on an oil field is just luck), GDP per capita is still a favorite of economists. We prefer to use GNI (as does the World Bank), as it includes all output created by a country’s residents, whether at home or abroad. Fully aware of the problematic nature of GDP/GNI per capita data, we present it nonetheless:

Having looked at how Teutonics measure up on Rule of Law, Trust, Egalitarianism, Future Orientation, and Economic Development, let us peer under a few more pots. While not easy to categorize, the following indicators could nonetheless help us understand why 50% of the world’s potential migrants want in to that 8% of the planet run by NW Euros.

The ability to file patents depends on a hodge-podge of qualities–creativity, intelligence, economic development, no doubt many more . . . We present it here, only the top 20 of 139 countries consulted: Since the time when they were but a mild annoyance at the borders of mighty Rome, the Germanics have migrated, conquered, spread their languages and cultures far and wide–in the Anglos’ case, to the four corners of the world. Since they let go of their empires, a surprising reverse-colonialism has brought millions of Sun People to their shores, clamoring to be ruled by them once again.

How did we get here? How has this group of marginal Teutonic tribes come to so utterly seduce the spirits of the world’s migrants, creating societies that are the envy of the planet?

Before NW Euros start patting themselves on the back, they would do well to remember the traits that make their societies so pleasant are for the most part the result of chance. It’s been hypothesized that northern ‘Ice Peoples’ evolved in a harsh environment that selected for future orientation, organization, cooperation, and high parental investment (‘R-k theory’). The abundant environment of ‘Sun Peoples,’ the theory goes, would have selected for just the opposite.

Much later, as HBD Chick has shown in detail, the Germanic ‘core’ of Europe underwent a series of unusual selection pressures. Among them were Church-imposed outbreeding and manorialism, which seem to have fostered more nuclear families and individualism, commonweal-orientation, civicness and less violence. (See also JayMan.) The strange path NW Euros took has left its mark, and they in turn have left their mark on the world. {snip}

But part of what makes them such welcoming hosts–their out-group altruism and tolerance–can also lead them down a path of national self-destruction if they do not take care to preserve their own cultures. As Harpending and Cochran have shown, natural selection is roaring along faster than ever. The very traits that allowed Teutonics to captivate the world may very well end up being their downfall. Only time will tell.